AUBURN, Ala. -- Contrary to the most recent Sports Illustrated cover, defeat doesn't lurk on any given Saturday in the Bloody South. It lurks on every given Saturday.

This was the seventh week of the season, and at least one Southeastern Conference team has lost in each one. Now, after a deafening night in the Loveliest Little Village on The Plains, the body count is complete in the Bloody South.

Twelve teams. No unbeatens. Nobody left standing tall in the national championship chase.

Let the lesser leagues, where the athletes are less swift and the hitting is less violent, rejoice.

Florida was the last to go. The Gators survived six Saturdays before being unseated on the seventh by an Auburn team that lost to Arkansas the week before, on this very field, by 17 points. Florida didn't surrender an offensive touchdown yet somehow gave up 27 points, losing by 10 to the Tigers as its four-year starting quarterback crumbled in the clutch.

But we'll get to the Chris Leak Chronicles later. The bigger story is the big picture: We're barely past the halfway point in 2006, and the league that considers itself without peer must pursue the crystal football from the outside once again. 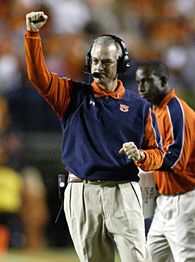 "That's why we need a playoff," said Auburn coach Tommy Tuberville. "It's just so unfair to this conference. To go undefeated, it's got to be a miracle. You've got to be lucky, and then everyone's going to start politicking.

"That's the way it is, and probably the way it's going to be every year. It's just so tough."

The SEC attrition rate has been a hot topic for a couple weeks, as the big dogs took turns taking each other down. It has left the league's commissioner, Mike Slive, in the ticklish position of also heading a Bowl Championship Series system that has worked effectively against his league for the past three seasons.

"Our job is to administer and coordinate," Slive said before kickoff at Jordan-Hare Stadium Saturday night. "But it's not possible to always be comfortable in that chair."

Slive extolled the virtues of the college football regular season and bowl system, but said he's "open to having a discussion" about a limited-scope playoff.

"If you have to be undefeated to go to the championship game," Slive said, "that may be the reason why I'm so open-minded to having that discussion."

By night's end, Slive had to be even more indulgent of playoff lobbying. And he's probably hoping for an Auburn-Florida rematch in the league championship game in December.

Because while this game settled one thing -- nobody's going unbeaten in the SEC -- it left a couple of sizzling subplots to follow.

1. Instant replay -- and the officiating in general in college football -- has fully crossed over into travesty territory. Officials who once administered games and made calls with some level of assurance and competence are now slapstick bad -- and the system installed to backstop them is failing.

"That's why we need a playoff. It's just so unfair to this conference. To go undefeated, it's got to be a miracle. You've got to be lucky, and then everyone's going to start politicking."
-- Tommy Tuberville on how tough it is for an SEC team to make a title run

The Oklahoma-Oregon debacle was easily the worst, but it has company in the gallery of replay horrors -- including a key play here Saturday night.

Trailing Auburn by a point and facing a third-and-three from the Tigers' 6-yard-line in the fourth quarter, Leak backpedaled and found Tuberville's defensive line in his face. In what appeared to be a panic maneuver, Leak pumped his right arm and then appeared to release the ball, spiking it incomplete into the turf.

The immediate assumption was that a flag would fly, calling intentional grounding on Leak in the neighborhood of the Auburn 16. Instead, there was no flag, and apparently no whistle. The refs ruled the play a fumble, and linebacker Tray Blackmon scooped it up and ran 10 yards with the ball.

"I thought it was [a fumble], but I can't tell," Tuberville said. "That's the reason we have replay."

But what if replay doesn't get it right?

Replay seemed to show Leak throwing the ball before Blackmon hit the ball or Leak's arm, which would surely indicate a forward pass attempt. Yet the replay official -- whose name was mercifully not released, to stave off torch-wielding mobs from the Sunshine State -- didn't see it that way. In a hasty review (one minute, four seconds, according to one press-box timer), he upheld the call on the field.

"We challenged it because we thought it was an incomplete pass," Florida coach Urban Meyer said. "We will go back and watch it on TV, but obviously there wasn't enough evidence to overturn the ball on the field. We have to live with the call and we have to get better."

So does the officiating.

2. Bad as that call appeared to be, it was still a stunningly bad play by Leak -- and it wasn't his worst play of the night. Which means the kid's legacy remains hollow, and the quarterback controversy is on in earnest in Gainesville. 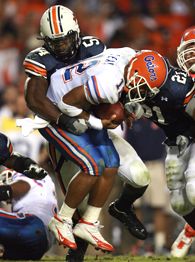 Leak was supposed to be the player who sustained Florida's program in the uncertainty of the post-Spurrier world. He'll leave Gainesville with a bag full of records and fancy stats, but he's never won a championship of any kind and he's rarely played like a hero in big moments.

None bigger than this one.

Armed with a lead on the road, Florida was shut out in the second half Saturday night. And by the fourth quarter, Leak was coming unglued. His final six plays of this game were as follows: Fumble, interception, pass batted down, pass overthrown, pass dropped, and -- the coup de (dis)grace, a completed pass that was lateraled back to Leak as he fell down. It bounced off his chest, was scooped up and run in for the final touchdown at the final gun.

The killer plays were the fumble and the interception.

Bad call or not, Leak appeared skittish in the face of the Auburn rush when he was called for fumbling. Throwing the ball into the ground was an astonishingly bad play for a quarterback of his experience level.

The interception was rock bottom for Leak. Still trailing by just a point later in the fourth and with a first down at the Florida 29, Auburn came after Leak again. With Quentin Groves closing in, Leak threw a weak, off-the-back-foot lob to the middle of the field that was easily picked off by safety Eric Brock. Andre Caldwell looked to be racing free and clean behind Brock, but the pass never got close to him.

Still, Caldwell stuck up for his quarterback.

"He's our leader," he said. "We don't blame him. We still love him as a quarterback."

Problem is, thousands of Florida fans love freshman Tim Tebow more. Tebow hasn't proved he can do everything a quarterback must do at this level -- checks, reads, tough throws, playing a complete game -- but he does make plays. And he possesses an abundance of the one thing Leak utterly lacks: discernible fire and passion.

When Leak met the media after the game, his orange tie was knotted and his personality was typically buttoned down. His every answer was dispassionate, bloodless, devoid of feeling or meaning.

Leak has never been anything but a quality guy in Gainesville -- and after the appalling display from Miami and Florida International Saturday night, recognizable class shouldn't go unappreciated. But it's fair to wonder whether there is enough competitive flame inside Chris Leak to inspire a football team.

When Leak was finished with his brief interview, he walked out and was greeted by his parents. Offensive coordinator Dan Mullen squeezed the arm of Leak's father, Curtis, and spoke quietly with him for a few moments. Leak hugged his mom and, poker face still intact, walked to the team bus.

He and the SEC had absorbed one more loss in an autumn full of them. On every given Saturday, somebody goes home beaten in the Bloody South.