ANN ARBOR, Mich. -- Michigan football is one of the great static empires in all of athletics. The pace of change here is only slightly more rapid than continental drift.

Take the regal relic that is Michigan Stadium: It contains no chair-back seating, no luxury suites, no eardrum-battering sound system, no corporate signage, no manipulative marketing, no discernible evidence that the 21st century even exists.

And the next night game in the Big House will be the first.

Now examine the coaching lineage of the Wolverines. What Bo Schembechler began in 1969 continues today, with Bo handing off to assistant Gary Moeller, who was succeeded by assistant Lloyd Carr. There will be seizures in this state if the head coach is ever anything but a Michigan Man. 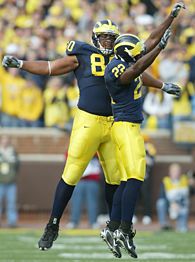 It's as if Bo hung a "Do Not Disturb" sign on the place when he retired in 1989. And they listened. And still managed to win.

But even here, in the football land where time stands still, creeping modernism is being accommodated. Grudgingly, perhaps, but accommodated nonetheless.

On Thursday the school unveiled an artist's rendering of what a massive remodeling of Michigan Stadium might look like. Luxury boxes and club seating are inevitable, even if some traditionalists throw themselves in the path of the first wrecking ball. Construction could begin after the 2007 season.

And last winter, after a 7-5 season had some fans agitating for his ouster, Carr finally confronted the need for change within his program.

His offensive and defensive coordinators -- Terry Malone and lifelong Michigan Man Jim Herrmann -- were replaced after being encouraged to pursue opportunities in the National Football League. (The replacements -- Mike DeBord and Ron English -- came from on staff, naturally. Carr was hardly going to get radical and go outside the family.) The offseason conditioning approach was revamped, too, with special attention paid to trimming fat and improving diets.

Today, with an 8-0 record and clear sailing until Armageddon in Columbus on Nov. 18, Michigan can say it (through clenched teeth, perhaps):

"We're just trying to be better every game," said Wolverines defensive end LaMarr Woodley, "and not be that 7-5 team."

They bear no resemblance to that 7-5 team, to the delight of the Big Blue fan base. Adding to the fans' enjoyment is the fact that, even with the changes of the recent past and near future, Michigan is winning with old-school football.

This throwback team snugly fits the stadium's antiquated ambience, and never more than Saturday afternoon. The Wolverines' 20-6 smothering of Iowa was built on a pair of Schembechlerian staples: a belligerent defensive front seven and a persistent running game. 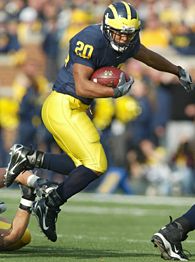 The nation's best run defense allowed just 41 yards to the Hawkeyes. On the other side, the Wolverines refused to stop pounding the rock until they had worn down Iowa and running back Michael Hart had piled up 126 yards and two touchdowns.

Bo knows: Ownership of the line of scrimmage remains the foundation of successful football. And Michigan is very, very good in the pits.

Unfortunately, the 77-year-old Schembechler had to watch this game from an Ann Arbor hospital. He felt ill Friday on the set of a Detroit TV show he was taping called the Big Ten Ticket. Workers at the TV station called 911, but the famously stubborn Schembechler insisted on finishing taping before going to the hospital.

"Bo said, 'I want to go home because then I can watch the game on big-screen TV,'" Carr related. "He was complaining before that. He said, 'They're not going to let me watch the game,' because his heart was racing.

"I told him there's a few things more important than watching this football game. And staying alive is one of them."

You sure hope Schembechler is alive and well four weeks from now, for what should be the biggest Michigan-Ohio State game since Bo was chomping gum on one sideline and Woody Hayes was raging on the other. The path is now clear for both teams to steamroll into the Horseshoe on Nov. 18 undefeated, with absolutely everything imaginable on the line.

"Everyone's talking about O-State, O-State, O-State," said the puckishly dimpled Hart, pound-for-pound the toughest dude in college football. "We know we have games before O-State. We've got to focus on those."

Even halfhearted focus should get Michigan past Northwestern, Ball State and Indiana (teams ranked 121st, 122nd and 74th, respectively, in last week's Sagarin Ratings). Ohio State should also be able to sleepwalk past Minnesota (46th), Illinois (107th) and Northwestern (121st).

"We don't live in a vacuum," Carr acknowledged. "We know what's out there, and it's exciting to be there. We won't deny that. But the job isn't finished."

One job is finished: the saving of Carr's scalp. It's highly doubtful that the Michigan Men in charge -- athletic director Bill Martin leading the way -- would have gotten rid of Carr, but a repeat of last season would have made everyone miserable.

This is no repeat. The team that grabbed America's attention by trampling Notre Dame in South Bend back on Sept. 16 hasn't let up since.

The main source of that relentlessness has been the spectacularly athletic front seven on defense. The tackles are immovable, the ends are unstoppable and the linebackers seemingly come from all angles. Going into Saturday's games, only two teams (Oregon State and Texas) had racked up more negative yards from scrimmage than Michigan, which had 52 tackles for a loss of 263 yards.

"They were pretty tough. They were without a doubt the best defense we've played all year. How physical they are, their size, their speed -- we haven't seen anything like that."
-- Iowa quarterback Drew Tate

The Wolverines added another 28 yards in losses Saturday, sacking Iowa quarterback Drew Tate five times. Linebacker Shawn Crable, a stunning specimen at 6-foot-5 and 245 pounds, had three sacks on blitzes. Woodley had the other two, pushing his total to nine for the season.

And honestly, Tate made some heroic plays to avoid several other sacks.

"They were pretty tough," Tate said. "They were without a doubt the best defense we've played all year. How physical they are, their size, their speed -- we haven't seen anything like that."

Players say the Michigan defensive scheme is largely the same as last season, but credit English for simplifying and motivating. Now the focus is Belichick-like: Just do your job.

"Guys this year are doing their responsibility," Woodley said. "If they're supposed to hold the A gap, they're holding the A gap. They're not trying to do more than their job."

And they're doing the job all game long. The fourth-quarter collapses of 2005 are nowhere to be found.

"It's all about how you finish," Woodley said. "Your job on defense is to make the guy across from you quit. You may knock me down, but I'm going to keep coming. After a while you may be like, 'Man, this guy keeps coming. He won't quit.'"

Yet for all the relentless fury Michigan's defensive line exudes on the field, they are a jocular group off it.

"We're all jokesters," said tackle Alan Branch, who is almost svelte at 6-6 and 331 pounds. "We all do little pranks.

"LaMarr started that. We just like to have a good time out there."

The 6-2, 269-pound Woodley, who has a buff Woody Woodpecker tattoo on his left arm, is having an All-America season at end. Teammates say he is an all-world needler in the locker room.

Some of which can be, ahem, very personal.

Like the "mama jokes." Asked to explain, Woodley grinned bashfully. 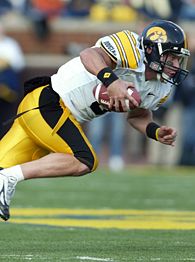 "It's just stuff like, 'You know I'm your daddy,'" he said. "Or, 'I'm going to take your mom out tonight to a nice restaurant. I gave your mom a hug and she gave me a nice, tight squeeze.'"

Stray into family territory like that in the World Cup and you might be head-butted. But Zinedine Zidane doesn't dress in the Michigan locker room.

"It shows you how close our relationship is, that you can make jokes like that," Woodley said.

In truth, the defensive linemen appeared very respectful of each other's elders. Right after the final gun Saturday evening, several of them politely hugged Rene Biggs, the mother of starting end Rondell Biggs.

Ma Biggs, as she's known around the team, walks with the aid of a cane these days. She had spinal surgery over the summer that did not go well, she said, resulting in nerve damage in her legs and pain in her neck. The former special ed and math teacher is now on disability.

So Ma Biggs spends her time attending Michigan football practices and mothering players who are away from home.

"It makes me feel better if I can do anything for the guys," she said. "I love 'em to death."

Michigan fans are learning to love this team to death. Even if the static empire had to embrace some change along the way.