BIRMINGHAM, Ala. -- For the first time all afternoon at Southeastern Conference media day, Bruce Pearl was at a loss for words.

It lasted about five seconds. 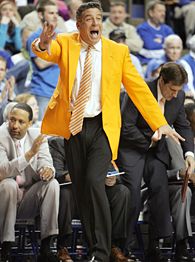 The question: Who in the SEC will boo you most enthusiastically this season?

"Vanderbilt," Pearl said, after an eternity of silence by his loquacious standards.

So many enemies, so tough to choose. When you're the most hated man in the SEC -- and loving every boo of it -- how do you select just one?

Vanderbilt gets the nod, Pearl said, "because of the orange jacket." It was Feb. 1 against the Commodores that the Tennessee coach first pulled out his sport coat the color of a traffic cop's safety vest. It lives on in Technicolor infamy in the minds of all SEC fans who saw it.

It helps that Tennessee swept Vandy last year and that Vandy gets first shot at Pearly, hosting him Jan. 10 in the Volunteers' first league road game. But Memorial Gym will not be the last place that boos Bruce Pearl like a wrestling villain.

They'll get on him with gusto at Kentucky, after Pearl publicly put the bull's-eye on the Wildcats shortly after he was hired. Pearl said Tennessee needed to reinvigorate its rivalry with Big Blue by aspiring to rise to the level of the league standard-bearer. Wore the orange jacket in Rupp, too, where the Vols pulled off a 75-67 win.

They'll scald him at Georgia, after Pearl helped orchestrate Tennessee's near takeover of the Bulldogs' Stegeman Coliseum in February. He encouraged Vols fans to make the trip to Athens, and several busloads of Big Orange backers did just that. After an 83-78 Tennessee win, some of the Vols players climbed into the stands to celebrate with their fans -- and stayed there for about five minutes.

"The only thing I did last year that I'd apologize for," Pearl said.

They'll get on him at South Carolina, after Tennessee took two of three games from the Gamecocks last season. That helped force Carolina off the NCAA Tournament bubble and into the NIT.

And rest assured, they'll rip him at Florida. Pearl brought his team through the crowd last January in Knoxville before playing the undefeated Gators, then coached it to an 80-76 upset. He beat Florida in Gainesville, too, while manically sweating through the coat and pants on his gray suit, 76-72. And at this SEC media day he mentioned, oh, five or six times that his overachieving Vols beat the eventual national champs twice.

How much do the Gators want payback for that sweep? Pearl bumped into Florida hero Joakim Noah in July at the adidas camp in Georgia, where Noah was a counselor, and asked the Final Four Most Outstanding Player why he came back to college.

Noah's answer: "The real reason I'm coming back? To beat you guys twice."

Pearl, getting in the last word: "We might play three times."

After years of dreadful dullness, the SEC has transformed into the most charisma-laden league in America -- without any help from the flagship program, Kentucky.

Start with Noah: His game made him the poster boy for March Madness 2006, but his ponytail and quick wit and big mouth make him the preseason poster boy for all of 2006-07. Add in LSU strongman Glen "Big Baby" Davis, who gushes personality like a tapped fire hydrant. And do not forget Pearl, who took just one stunningly successful season to become the league's leading lightning rod among a boring bunch of coaches.

Pearl loves the spotlight like every coach -- but flaunts it like very few. He's a ham who doesn't hide it.

"That guy's animated, man," said Big Baby, who should know animated. "I thought I had some drama in me, but he's a dang soap opera. Suspense, irony, you never know what's going on with him. He's a great coach, though."

Davis was there when Pearl had his moment in Baton Rouge. The LSU students had been taunting scrappy Tennessee forward Dane Bradshaw all game, and he'd fired back a few times. He was on the bench by Pearl in the closing minutes of an 88-74 LSU victory when the students started a mocking serenade of Bradshaw, urging Pearl to put him back in the game.

Pearl to Bradshaw on the bench: "You want to give 'em what they want?"

So Pearl grabbed Bradshaw's wrist and led him to the scorer's table, holding up his arm like the victor in a boxing match. The LSU students actually ate it up. LSU coach John Brady was less thrilled, ripping Pearl in comments he did not think would be reported by the media.

"I loved it," Bradshaw said. "He's such a player's coach. He's sincere when he says that he always has your back.

"He was right there with me. He wouldn't just send me into no man's land. When you feel like the coaching staff has your back, you're going to have their back in return."

Pearl is the rare coach who doesn't feign deafness in hostile gyms. Bradshaw said that before Tennessee's game at Alabama, the coach was talking with Crimson Tide fans and left them laughing.

"It's a love-hate relationship with fans," Bradshaw said. "You'll see him laughing and talking with them. But when the announcer calls his name to the fans, it's always boos."

There was some figurative booing of Pearl by his peers last season, when they somehow failed to vote him SEC Coach of the Year. That honor instead went to Brady, whose 14-2 SEC mark and regular-season championship certainly were not without merit.

But LSU, armed with at least two first-round NBA draft picks in Tyrus Thomas and Davis, was supposed to be good. Tennessee, with an undersized lineup, short bench and legacy of abjectly soft play under Buzz Peterson, was roundly picked to finish at or near the bottom of the SEC East.

Instead, the Vols won the SEC East, radically changing their personality and playing style along the way. They went from compliant to combative, from tentative to tenacious, and from 14-17 to 22-8 against a tough schedule. Tennessee ranked among the least likely No. 2 NCAA Tournament seeds ever.

"Tennessee was a pretty good feel-good story, if I do say so myself," Pearl said so, himself. "Because everyone loves the underdog."

This year, the underdog tag is gone, replaced by expectations of sustained success. Pearl recruited well enough to offset some key personnel losses, even though his team again will be frightfully small.

"We're going to compete to win the East," Pearl said. "I pick Florida, Kentucky, and then I'd say Tennessee will battle for that third spot.

"But we're the defending champs. The championship is going to come through Knoxville."

Out on the road, every SEC fan base will be dying to boo the man in orange.