LOUISVILLE, Ky. -- This will sound like hyperbole. It's not. It's the truth:

At the intersection of improbable dream and manifest destiny, Brian Brohm delivered the performance Thursday night that he was born to deliver.

The national television cameras, the bowl scouts, the BCS standings, the national championship implications, the postgame mosh pit at delirious Papa John's Cardinal Stadium -- these un-Louisville-like trappings of football success were all but preordained for the most celebrated recruit in school history. The game plan for the home team's 44-34 blitzing of West Virginia, which officially put the Cardinals in the passing lane to the national title, was drawn up when No. 12 was in the crib.

The fourth family member to wear Cardinals red and white envisioned the improbable scene as a child, and truth be told, his dad, Oscar, undoubtedly envisioned it even earlier for the youngest of his three boys -- all of whom followed his footsteps to U of L. Little Brian was a quarterbacking savant, soaking up the teaching of the family QBs: Oscar and brother Jeff, who went on to the NFL.

"He was awesome, wasn't he?" coach Bobby Petrino said. "You could see it all week long, how he prepared. He loves the big games."

The games have gotten no bigger than this in Louisville. That's why Brohm came here, and it's why his hometown university so desperately wanted him to come here. 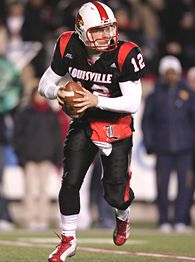 His talent was the catalyst that could make a small miracle happen.

"It's been a dream of mine since I was a kid for Louisville to be on this stage," Brohm said.

There were a million reasons to doubt the dream. Brohm remembers being in the run-down Triple-A baseball stadium the Cardinals used to call home at the tail end of a 1-10 season in 1997, along with just a few thousand other fans. Only someone with exceptional vision could look at that and see the seed of something this grand.

"It might have seemed, at the time, naive, or like I was in a dream world," Brohm said with a small chuckle. "But I always thought this could happen."

That's why a Catholic kid who spent his whole life in Catholic schools said no to Notre Dame and all its tradition. That's why a guy who was sure he could play right away in college said no to Tennessee and a recruiting pitch that guaranteed him a chance to start as a true freshman.

And that's why the nation's top quarterback recruit of 2003 said yes to Louisville, which at the time was still a Conference USA school that hadn't risen above Liberty Bowl level since 1990. No wonder consternation rippled through Gridworld when Brohm made his choice.

"I went ahead and went with my dream," Brohm said, "instead of a decision other people might have
made.  People might have thought I was crazy, but I said when I signed I thought I'd have the opportunity to play for a Big East championship, play in a BCS game and play for the national championship."

After this game, the 6-foot-4, 224-pound junior's team has the inside track to the Big East championship and a stunningly real shot at playing for the BCS national championship. Louisville is 8-0 and, give or take a poll voter or computer program, in control of its own destiny.

There will be howls of complaint from the establishment programs in the SEC and Big 12, among other locales, if Louisville runs the table and earns a title spot ahead of their champions. But if the Cardinals successfully negotiate a supremely difficult closing month of the season, they have an excellent chance of landing in Glendale, Ariz., opposite, say, Ohio State or Michigan.

But there is heavy lifting to do between now and early December, starting in the wholly improbably locale of Piscataway, N.J. Despite the expected pot shots from other leagues, the Big East has nothing to apologize for in terms of schedule strength in the closing month. While the entire city is busy slapping the Cardinals on their backs, they'll be trying to refocus for a rigorous stretch run.

"We're kind of new to this top 10 thing," Brohm said. "Hopefully we can stay here for a while."

To do so, they'll have to complete the second half of a Thursday night double against undefeated teams. How often has that happened this late in the season?

One week after winning the biggest game in its history, the Cardinals will be the visiting team in the biggest game Rutgers has played since the first game. As in, ever, in 1869, against Princeton. The game that got this crazy thing going.

"We've got a real tough game coming up next week with Rutgers," Brohm said. "Every week from here on out gets bigger." 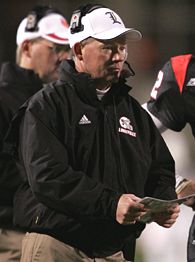 The clear and present danger of falling flat in an obvious trap game was not lost on Brohm, even in the afterglow of this landmark victory. Asked if the West Virginia win was the biggest in school history (trust me, it was), he had a cautious response ready.

"It could end up being the biggest -- depending how we end up the season," Brohm said. "If we don't finish out, they'll look back and say, 'They beat West Virginia but couldn't finish.'"

Beating West Virginia would have been impossible if Brohm hadn't come back from thumb surgery in September. The injury occurred against Miami Sept. 16 and Brohm hurried back after missing two games. The rust showed, as he struggled through two subpar performances.

But Nov. 2 was always the date circled. He had to be ready for this one, and it came together in the 12 days between Louisville's last game and West Virginia.

"My zip came back," Brohm said. "When that came back I got a lot more confident in my throws."

He could hardly have looked more confident than he was last night. Armed with an aggressive game plan -- especially on first down -- Brohm lit up West Virginia's previously untested secondary.

Nobody in college football can carve up film like Petrino, and his study showed the Mountaineers to be vulnerable to seam routs from slot receivers. Louisville dialed up a go route to slot receiver Harry Douglas on the first play for 22 yards and never let up.

On the first play of subsequent possessions, Brohm threw a 20-yard strike to Mario Urrutia that was dropped; a 40-yard bomb to Douglas; a 36-yard pass to Urrutia, a 25-yard bullet to Douglas; and a 26-yard shot to Urrutia.

"We were trying to attack them," Brohm said. "We were going to take shots, throw haymakers."

West Virginia put itself on the ropes with two fumbles and some bad punt coverage in the third quarter, falling behind 30-14. But a resolute 92-yard drive brought the Mountaineers back within 30-21. That's when Brohm delivered the knockout shots.

He completed 4 of 5 passes on the next drive for 75 yards -- including a deft audible out of a run to an underneath route by little-used Jimmy Riley for 40 yards. Brohm capped the drive with a tight 7-yard lob along the sideline to Urrutia for a touchdown.

On the next possession, Brohm hit Urrutia twice to put West Virginia on its heels, then let the running game finish off the drive for a 44-27 lead. The game was over at that point, and it was time for a basketball town to fully embrace football euphoria.

"You could tell these fans have been waiting for this for a long time," Brohm said.

So has he. Since he was born, to be precise.