We Have A Laundry Problem

Ever since Louisville (2) beat West Virginia (3) 44-34 Thursday, critics have been bashing the two teams and their conference like the most vicious political attack ads. You'd have thought the Big East had come out in favor of flag burning and flag football.

Never, to The Dash's best recollection, has an entertaining game between top-10 teams provoked such a backlash.

The Dash suspects this all comes down to laundry and logos. The trappings of tradition have a funny way of altering perspective. If the arriviste Cardinals had an orange steer on the side of their helmets and the nouveau riche Mountaineers wore cardinal and gold, reviews would have been more favorable. 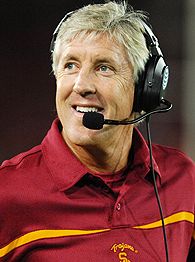 When Texas and USC racked up 1,130 yards and 79 points in the Rose Bowl, it was considered one of the greatest games ever played. When Louisville and West Virginia combine for 1,018 yards and 78 points, it's the result of atrocious defense better suited to the Western Athletic Conference than the BCS Championship Game.

Vince Young, Reggie Bush and Matt Leinart can make good defenses look bad. So can Brian Brohm (4), Steve Slaton (5) and Pat White (6), especially with game plans conceived by Bobby Petrino (7) and Rich Rodriguez (8). Ask SEC blueblood Georgia, which had the No. 8 scoring defense and No. 18 total defense nationally in 2005 but was blown up for 502 yards and 38 points in the Sugar Bowl by West Virginia.

The establishment critics don't want to hear that. They want to decide the championship game on laundry.

It's not hard to understand the motivation for knocking the unbeaten Big East teams as national title contenders, but The Dash says that a 12-0 team from that league deserves to play for it all. Just for fun, compare scores of the Big East's best against common opponents for other top 10 teams.

Louisville beat Kentucky by 31 at home. Florida beat the Wildcats by 19 at home. (The Gators, one of the teams Big East bashers were promoting as superior after Thursday night, strutted their stuff Saturday against Vanderbilt. Beat the Commodores by six. Florida hasn't scored more than 28 in a game since Sept. 9 and has outscored its last seven opponents by 7.2 points per game.)