It won't be the same without him.

Not Saturday. Not ever.

One of the very few events that could mitigate the towering anticipation for this matchup between the Wolverines and Buckeyes has stunningly transpired, on the eve of the game. Bo Schembechler has died. Just when it appeared he might stubbornly live forever.

It's a flabbergasting, karmic coincidence -- the Hall of Fame coach dying the day before the biggest of all 103 games in a rivalry he helped enliven. Emotions will be in powerful conflict in Ohio Stadium on Saturday. The game will still be played at a passionate level that Bo would both demand and applaud, but there will be shadows across many hearts in two states.

It's a terribly sad loss for the winningest football school of all time. 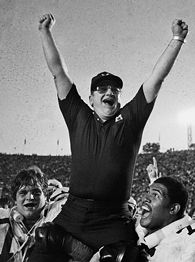 Precious few men in the history of the game have exerted such a dominant influence over a single football program for as long as Schembechler did Michigan's. The only two living icons who come to mind are Joe Paterno at Penn State and Frank Broyles at Arkansas.

It's been Bo's Way at Michigan since he arrived in 1969. His successors have come from his family tree: former assistant Gary Moeller, followed by former assistant Lloyd Carr. The very ethos of the program remains distinctly Schembechlerian in almost every way. It's no coincidence that the man maintained an office in the athletic department to this day.

But it's a sad loss on the other side of the great rivalry, too. Anyone who's ever felt his or her pulse pound faster at the sight of maize and blue or scarlet and gray will mourn today.

The twin titans who transformed a great rivalry into the greatest rivalry both are gone now. Bo Schembechler and Woody Hayes defined it, pure and simple.

Bo was the only man in the Midwest tough enough to go jaw-to-jaw with Woody -- Schembechler's coach at Miami (Ohio) in 1949-50 and boss at Ohio State in the early '60s -- and win more than his share.

The head-to-head record is Bo 5, Woody 4, with one unforgettable tie. Before Schembechler arrived, Hayes was 12-6 against Michigan.

But those are mere stats, and their personal rivalry went far beyond stats. You could persuasively argue that the Schembechler-Hayes showdowns during 1969-78 are the apotheosis of college football.

Those games embodied everything that makes the sport so compelling: sky-high stakes, immense pride, intense competition, unwavering will, extreme physical and mental toughness, great athleticism, healthy respect for the opposition and a reverence for tradition.

If you saw them, you know what I'm talking about. If you didn't, I'm sorry. Tune in to ESPN Classic, read a few books and you'll hopefully understand.

"What made the rivalry was Bo taking on his mentor," said former Michigan offensive lineman Doug James, one of the captains on Schembechler's 1984 team. "No disrespect meant to all the great Michigan and Ohio State players who went before that, but what made this rivalry special was Bo Schembechler challenging the Old Man, as Bo used to call him."

Last time I talked to Schembechler it was late August. I was writing a story about mounting pressure on coaches who had won national championships -- current Michigan coach Lloyd Carr among them. Bo was, as usual, passionate. He fiercely defended Carr, one of his former assistants.

"There isn't one [critic] out there with guts enough to come up to me and say we need to change coaches," said Schembechler, who hired Carr decades ago. "I know there's some of that talk out there, but they don't tell me.