INDIANAPOLIS -- Greg Oden has played three games of college basketball, all of them with one hand tied behind his back. His surgically repaired and heavily taped right wrist might not be fully healed before he's doing the grip-and-grin with David Stern as the No. 1 pick in the 2007 NBA draft. 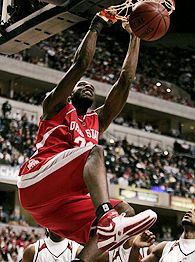 And it might not matter. Three games in, it's time to abandon understatement and speak the staggering truth: Seventy-five percent of Oden could be enough to lift Ohio State to the national championship.

To the surprise of no one who saw him play in high school, he's that good, this fast. Oden's starter set is a pastiche of Patrick Ewing's defensive mentality, Robert Parish's stoicism, Shaq's zest for the dunk and Tim Duncan's feel for the game. That might be going a little crazy on the big man comparisons, but the mind reels at the freshman's potential.

Hell, the mind reels at the freshman's present.

Between those shots, he made a Waltonesque 17 straight on an assortment of dunks, jump hooks and putbacks. After not playing an organized basketball game for eight months, the one-armed man is now scraping by, shooting 90 percent from the field.

The foul line is a different story: Oden is just 10 for 21 there. Which is pretty lousy, until you consider the fact that the right-hander is shooting free throws as a lefty. Bo Kimble might be the only living human not impressed by that ambidexterity.