When you're in charge of nearly $100 million worth of college athletics and 36 varsity teams, the time to savor your accomplishments can be fleeting.

When Ohio State AD Gene Smith needs to feel the joy of the job, he goes to watch his teams play.

"I enjoy competition; that's where I came from," said Smith, a former defensive end at Notre Dame. "When I'm at a game, that's my time to reflect on the joys of where we are." 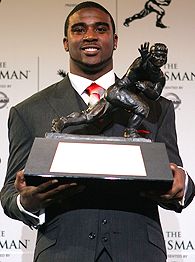 Tuesday night, Smith went to see his men's basketball team play Iowa State. He watched the most talented teenage player on the planet, freshman center Greg Oden, rack up 18 points and nine rebounds. And at halftime he watched the football team's quarterback, Troy Smith, hold up the Heisman Trophy to deafening applause.

"Sometimes these days I have to pinch myself."

"Every once in a while you have to pinch yourself," Foley said.

There's a whole lot of pinchin' going on in Columbus, Ohio, and Gainesville, Fla., these days. Even for accomplished ADs accustomed to rampant success, the current level of bliss feels like a dream state.

All of a sudden, their programs rule the two glamour sports in college athletics.

The Buckeyes, bullies of the Big Ten, are ranked No. 1 in football and No. 3 in men's basketball. Combined record this academic year in the two sports: 21-1.

The Gators, kingpins of the Southeastern Conference, are the defending national champions in men's basketball and are currently ranked No. 5 in the sport. They're No. 2 in football. Combined record this academic year: 21-3.

For the record, no school has ever won the football and men's basketball national titles in the same academic year. Not only do both the Buckeyes and Gators have a shot at that, they'll have to do it against each other. Right now they're on the verge of one of the more intriguing mini-rivalries in college athletic history.