Bob Knight is closing in on victories that will be historic in scope but pyrrhic in nature.

To understand the pyrrhic part, you need to know about "Project 880" at Texas Tech.

Knight, who is now tied with Dean Smith at 879 victories, likely will become the winningest coach in Division I men's college basketball annals during the Red Raiders' ongoing four-game home stand. In hope that people actually will show up to see Knight enter the record books, Tech has been offering $8.80 general admission seats to the four games at United Spirit Arena. And if you buy a lower-level ticket to those games, you can get one upper-level general admission seat for free. 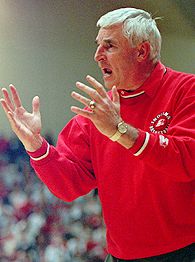 It's not an easy sell. Texas Tech averaged 6,707 fans in its 15,000-seat arena for four of its early home games this season (attendance for Sam Houston State was not listed) before pulling in 11,561 for the record-tying game against Bucknell this past Saturday.

This is the bed Bob Knight made for himself: He'll make history at an out-of-the-way school with no men's basketball heritage in a football state, in front of a house that very well could be less than full. He'll make history in exile, in effect.

Not exactly the moment of glory this could have been.

This is what the story would be today if Knight had ever confronted and overcome his greatest flaw, uncontrollable anger:

The approaching milestone will be downplayed, as usual. Indiana University coach Bob Knight isn't about to make a big deal about this, his impending 1,000th career victory as a college basketball coach.

Knight blew away Dean Smith's record of 879 wins years ago, and he wouldn't cater to a coronation then. Putting the record out of sight now should produce a similar reaction.

The General saves most of his excitement for national titles.

Some people wondered whether Knight had lost it after he won his fourth national title in 1993, with Eric Montross and Calbert Cheaney forming an overpowering inside-outside combination for the Hoosiers. But after a few lean years, he signed Indianapolis point guard Jason Gardner and Indiana staged a revival. 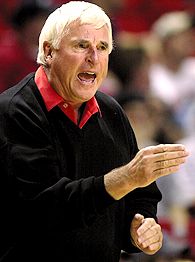 Behind Gardner and Jared Jeffries, the Hoosiers made the Final Four in 2001 and again in '02. Then Knight won his fifth title as coach at Indiana two years ago, riding second-generation Indiana star Sean May to a championship-game victory over North Carolina. (That gave the Hoosiers seven national titles and kept Carolina stuck at three, the last coming in 1982.)

After Knight passed Smith they named the Assembly Hall court in his honor. Now, he might have his best team since the unbeaten 1976 national champs.

With homegrown products Greg Oden, Josh McRoberts, Dominic James and Mike Conley Jr. leading the way, the No. 1 Hoosiers are heavy favorites to give The General championship No. 6 in Atlanta come April.

That would give Knight twice as many titles as his former protégé, Mike Krzyzewski, and would put him more than halfway to John Wooden. There's no way he coaches long enough to catch The Wizard, but you can argue that he's accomplished more at a time when the competition is greater.

Knight could walk away into the sunset after hitting 1,000 wins and capturing another national title, but he doesn't have to. The adoring people of Indiana will let BK stay as long as he wants.

It didn't always look like it would go this way.

There was a time when Knight backers feared his toxic temper would undermine his career and cut short his time at Indiana. Ever since he threw the chair across the court against Purdue and was confronted by his superiors, the controversies have disappeared. After receiving counseling for his anger problem some 20 years ago, Knight has been known for only one thing: incredible success.

As such, Knight has become the basketball version of Joe Paterno: a universally admired institution at his school. He's widely recognized as the game's greatest statesman – a guy who does things the right way, doesn't cut corners and keeps on winning.

Now he can finish his career in a perfect spot: in a state where basketball is a religion and Knight is its high priest.

Instead he'll set the record in exile and amid the usual conflicting emotions and opinions that swirl around the man. It will be a victorious moment, but a pyrrhic moment as well.