GLENDALE, Ariz. -- At the end of a game unlike any college football has ever witnessed, two of the great female icons in American culture staged a harmonic, hypnotic, borderline hallucinogenic convergence. 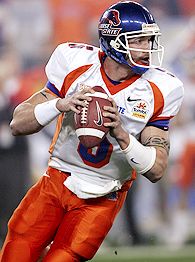 The Broncos culminated an unrivaled string of gusto-laden, do-or-die trick plays with one of the oldest in the book, the Statue of Liberty. And when Ian Johnson grabbed Jared Zabransky's behind-the-back handoff, scooted around the left side and scored two titanic points to beat lordly Oklahoma 43-42 in the Tostitos Fiesta Bowl, magic bloomed in the desert.

"It doesn't even seem real to me," Boise State offensive tackle Andrew Woodruff said, perplexedly rubbing his burr-headed scalp on the field while the Broncos fans roared in the stands.

Reality was further challenged when Johnson followed his winning run with an on-field wedding proposal to his flabbergasted cheerleader girlfriend. But, please, one blockbuster story at a time.

The big picture: The Valley of the Stun was the stage as an indomitable bunch of dreamers in orange pants landed the mightiest populist blow of college football's modern era. They were Hickory High in helmets, George Mason in cleats. They knocked off a gridiron giant one decade to the day after the burial of Pokey Allen, the beloved Boise coach who brought the program up to Division I-A status just 11 years ago.

The doors to the sport's throne room seem thrown open as never before.

Check the plaque at the lady's feet on Liberty Island this morning and see if the familiar sonnet has been changed. See if it now reads, "Give me your non-BCS teams tired of being disrespected, your poor of football budget, your huddled masses of mid-major strivers yearning to play in the grandest bowl games." And see if Lady Liberty is wearing a Boise State jersey today.

The Broncos entered their first Bowl Championship Series game undefeated but unloved in some elitist quarters. The Western Athletic Conference champions were made a steep underdog to the twice-beaten Sooners, and were suspected by some of fraudulence. They carried not just their own quest for nationwide credibility into this game, but the hopes and dreams of every alleged mid-major team that had been snubbed by a system of the rich, for the rich and by the rich.

Boise got its respect by beating the seven-time national champion Sooners in an overwrought overtime. But beyond the big picture was the delicious, utterly improbable manner in which the Broncos did it.

The method was true madness. And true genius. No coaching staff has ever ended a game with so much daring.

Out of conventional offensive options, first-year head coach Chris Petersen and first-year offensive coordinator Bryan Harsin went straight sandlot. They showed a career's worth of guts in calling one gadget play after another, rescuing Boise in a game it first had seemingly locked up, then had seemingly lost.

Asked if there could possibly be anything left in the playbook after this, the 30-year-old Harsin shook his head and smiled.

They threw it out in the following order:

The last of the 21 points scored in the final 86 seconds of regulation came on a preposterous play: a 50-yard hook-and-lateral pass from Zabransky to Drisan James to Jerard Rabb -- a combination that will be the Tinker to Evers to Chance of Boise State lore for the next century or so. Rabb crossed the goal line with all of seven seconds left to play, saving the Broncos from what seemed to be imminent defeat.

Boise practices the play every week in its final full practice before games.

"The guys love it," Petersen said. "We probably run it 10 times because they love it."

So it's a fun play to practice. Whether it's an effective play is another matter entirely.

"Can I say something?" interjected linebacker Korey Hall in the postgame press conference. "It doesn't work in practice usually."

Zabransky, who looked like he'd lost the game just a minute earlier with a brutal pick-six gift to Oklahoma cornerback Marcus Walker, fired a 15-yard pass to James. The wideout curled just a step or two toward the middle of the field before flipping a lateral to Rabb, who grabbed it and swiftly outflanked the Sooners secondary and sprinted the final 35 yards to the end zone.

It was as shocking a last-gasp play as anything but Cal's five-lateral slalom through the Stanford band. It might also have been the most daring last-gasp call (that worked) of all time.

But it was only the first in Boise State's trick play trifecta.

The next one came when the game was threatening to end with a violent anticlimax. On the first play of overtime, Oklahoma star back Adrian Peterson slashed off left tackle 25 yards for a stand-up touchdown. Suddenly the new life gained by the hook-and-lateral play was in danger of being extinguished.

A designed throwback from tailback Vinny Perretta to Zabransky was aborted on Boise's first play, as Perretta wisely ate the ball for no gain. Five plays later, the Broncos had crept to the Oklahoma 5-yard line, but faced a fourth-and-2.

Harsin went to the trick bag again. Zabransky went in motion to the left. Perretta, at quarterback, took the shotgun snap and rolled right, then lofted a lovely spiral toward the right corner of the end zone. Tight end Derek Schouman cradled it for the touchdown.

But that only made the score 42-41, which left Petersen with a decision: play for the tie or go all-in. Win or lose, in a single play.

When Zabransky called it in the huddle, confidence flowed.

"When he said Statue I thought, 'Ohhh, brother, we're going to do it in style,'" Johnson said.

Boise had run the play once before this season, against Idaho, and gained a first down on it. In a credit to Oklahoma's scouting, Sooners linebacker Rufus Alexander said they'd seen the play on tape and had prepared for it.

But they weren't quite prepared enough to stop Boise's perfect execution.

Zabransky took the snap and feigned a throw in the right flat to Boise's three-man bunch formation. As the Sooners flew in that direction, Zabransky calmly stuck the ball behind his back with his left hand -- a twist on the conventional handoff he'd convinced Harsin would work earlier in the season.

Johnson then crisply reversed course, circled behind Zabransky and lifted the ball from his grasp. Virtually unimpeded by a bamboozled defense, the nation's touchdown leader crossed the goal line one final time in this dream season.

Bedlam, commingled with outright shock at the audacity of the call, ensued.

Johnson charged to the corner stands where his 56 family members were gathered. He jumped into their embrace, only to bring a banister falling down on him, cutting his leg. Pain was incidental at this moment, though. After hugging his father, the idiosyncratic star runner "started moseying over" to his girlfriend, Chrissy Popadics.

Johnson actually got the idea while attending the Insight Bowl at Sun Devil Stadium last week. One of the Fiesta Bowl committee members, Tyler Hanson, suggested to Johnson that he propose postgame.

"Maybe I will," Johnson told Hanson.

Still, he opted to leave the engagement ring at the team hotel. Just in case things didn't turn out well in the game.

"I didn't want to bring it and then always remember a loss," he said.

In the locker room after the game, Johnson embraced a beaming Hanson, thanking him for his inspiration. Here's the play-by-play from the proposal:

With a national audience watching at home, Johnson dropped on one knee ("I nearly slipped") and asked for her hand in marriage. The poor girl, already delirious over the game's dramatic end, spluttered out a breathless acceptance. Johnson had pulled his finest misdirection play yet.

"I had my hopes up [for an impending engagement], but that was it," Popadics said. "We had talked about it and he said, 'Not for a while.'"

Explained Johnson: "There's no better time than on national TV after the game-winning two-point conversion."

Minutes later, Oklahoma coach Bob Stoops classily jogged up a tunnel to congratulate Johnson. On the victory, I think. Not the proposal.

Johnson's teammates were surprised by No. 41's move. But not shocked.

No bowl game has ever ended with circumstances this weird, piled improbably upon one another. When the final plot twist had played out and the final trickeration had worked, Boise State had beaten Oklahoma with a magical mix of determination and imagination.