PARADISE VALLEY, Ariz. -- In college football, conventional wisdom rules. It isn't quite undefeated -- see Boise State's gadgetmania gambit to win the Tostitos Fiesta Bowl -- but it has built up a healthy winning percentage since the leather helmet days.

Conventional wisdom said -- OK, screamed, over and over -- that you cannot win big in the fast, physical Southeastern Conference with a finesse offense like the spread option. Unconventional Urban and his much-mocked offense went 12-1, and the Gators own the league's hardware for 2006.

Conventional wisdom said if you say you have two quarterbacks, you really have none. Unconventional Urban played both Chris Leak and Tim Tebow with great effectiveness and no internal strife all season. 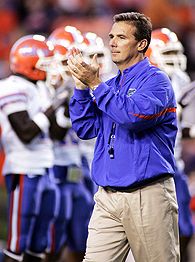 Conventional wisdom said if you can't count on a bell-cow running back to make hay between the tackles, you're dead. Unconventional Urban has cobbled together a 2,000-yard rushing attack that features six non-running backs among the team's top nine rushers, and nobody has run for more than 630 yards in 13 games.

There is by the book, and then there is defy the book. Meyer is boldly embracing the latter.

"He's not afraid to go against the grain," receiver Andre "Bubba" Caldwell said. "He's a risk-taker, and he's making a living right now doing it. He's doing things other coaches are scared to do."

Fear of failure tends to be a powerful inhibitor of creativity in football, and perhaps no place is that more true than in the SEC. Coaching conservatism is as prevalent as kudzu. Meyer can devise a game plan that's heavy on smashmouth and light on risk at times, but he's clearly not scared to think outside the box.

And this is one barbed-wire box.

His spread offense was doubted and derided by SEC elitists from the moment Meyer left Utah for Florida in December 2004. When the Gators struggled to score points in high-profile SEC games last season, the Pat Dye cultists only grew more contemptuous.

Misdirection and quarterback runs from the shotgun formation were not going to work, they said. You can't win in this league without plenty of fullback and the use of multiple tight ends to muscle up the running game.

"We heard that a million times," Caldwell said. "Everyone I knew said, 'This offense ain't gonna work. This ain't Utah. There's too much speed.' "

"He's not afraid to go against the grain. He's a risk-taker, and he's making a living right now doing it. He's doing things other coaches are scared to do."
-- WR Andre Caldwell on Urban Meyer

Here's where they are now statistically: the Gators are second in the league and 19th nationally in total offense, spitting out 398 yards and 29 points per game. While running the spread.

"I haven't heard [the criticism] much this year," Meyer said with a small smile Friday. "Quite a bit in the past."

Last year Meyer made some concessions to the hard truths of the SEC. He and his staff tweaked the offense after losing to LSU.

He moved former fullback Billy Latsko back to that position after exiling him to linebacker and added some more multiple-tight-end formations. He also demanded less of Leak running the ball, something he clearly was uncomfortable doing.

"They changed the offense a little bit to mold it around Chris, and it really helped," center Steve Rissler said.

This year, with the addition of RoboTebow as a glorified single wing fullback and Percy Harvin as a misdirection home-run threat, Florida has been able to run something closer to the original offense. It's still not the same spread Alex Smith ran so dazzlingly for Meyer at Utah in 2004, but the '06 Gators have performed a reasonable facsimile. At times.

"I think it's worked because the offense has changed a little bit," receiver Jemalle Cornelius said. "I think having the playmakers we have this year versus last year has let us use more of the spread that coach Meyer wanted to use originally. We've been able to get the matchups we like."

Matchups, the Gators say, is what the Meyer offense is all about. Isolate your playmakers against someone a step slower, then get 'em the ball.

"What we try to do is create mismatches," offensive coordinator Dan Mullen said. "Spread the field and see who they're singling up, and who they're not accounting for. The more weapons you can put out there on the field, who can make big plays with the ball in their hands, the harder you are to defend." 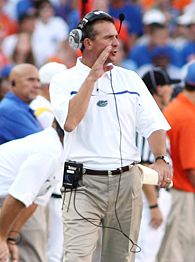 Which is one reason why Tim Tebow was exactly what Florida needed. The turbo-stud true freshman made the quarterback position a much more immediate running threat, which is the biggest reason why Meyer and Mullen rewarded him with his own package of plays. Having a 235-pound battering ram at your disposal in the red zone and other short-yardage situations is a great luxury.

But even if Tebow's on-field presence made sense strategically, it didn't make much sense theoretically. You're seriously going to yank a four-year starter on several occasions and replace him with a 19-year-old, at the one position where continuity has historically been paramount? Do the words "quarterback controversy" mean anything to you guys?

"Without two unselfish people, that would have been a problem," Meyer said. "And it was a great situation to have all year."

Said Mullen: "I just think people look from the outside and think there must be tension. Well, there's not. Chris has never stormed into my office and said, 'On fourth-and-one I demand to run the iso up the middle.'"

That's where the two QBs are such effective complementary parts, in terms of personality and skill set. Leak hates to put his head down and pound for yardage; his strengths skew more to reading defenses and delivering pinpoint throws. Tebow, meanwhile, seems to have a physical need for a violent collision every few minutes.

But credit Meyer for selling both players -- and the entire locker room -- on this most unique quarterback arrangement.

While we're at it, credit Unconventional Urban with also finding a way to run the football without a hang-your-hat running back. DeShawn Wynn is the starter but hardly the only answer, rushing for fewer than 50 yards per game. Leak and Tebow have combined to run the ball 29 times more than Wynn.

Florida has compensated brilliantly for its running back issues by using wide receivers (Percy Harvin, Jarred Fayson, Caldwell and Cornelius) on reverses and even taking direct snaps. Those four have run the ball 72 times, helping keep defensive ends, outside linebackers and cornerbacks at home instead of collapsing on the de facto ball carrier.

Thus the Gators running game has become an unpredictable entity. Where will they hit a defense, and how? Wynn off tackle? Harvin on a reverse? Tebow rampaging up the middle?

"You say, 'We're not going to use a tailback?' " Mullen said. "Well, that's OK. We'll let Tebow run it, get Percy Harvin to make some plays, punt and let our defense do its thing, and we'll be OK."

OK is an understatement. Florida is 60 minutes from the national title, having gotten here the unconventional way.