GLENDALE, Ariz. -- It would be an insult to Florida to say the Gators pulled a Villanova on Monday night.

Florida was no Villanova '85, no Cinderella, no No. 8 seed riding some miracle run. It was a deserving participant in the Tostitos BCS National Championship Game, and Ohio State had the physical and emotional bruises to prove it Tuesday morning.

But make no mistake: The Gators' 41-14 demolishing of the Buckeyes was the best performance by an underdog college team in a national championship contest since Villanova threatened perfection by shooting 80 percent from the field against Georgetown on April 1, 1985. It didn't take error-free football to beat unraveling Ohio State on Monday night, but Florida played that well anyway.

"Who woulda thunk it?" Florida defensive backs coach Chuck Heater said to a fellow Gators staffer on the elevator late in the game, as they hustled downstairs to join the celebration. "Coaches never think it's going to be like that." 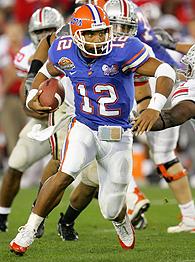 Nobody else thought it was going to be like that, either. Ohio State was a 7½-point favorite. Rarely has Las Vegas and almost every member of the sports media -- my moronic self emphatically included -- been this wrong.

Florida had a month between BCS Selection Sunday and this game to simmer in a stew of disrespect. Clearly, the Gators had reached a boiling point by kickoff.

"Motivation was not an issue," said Urban Meyer, whose first six years as a college head coach merely rank among the most impressive in history. "If you are looking for a great pregame speech, I didn't have to have any. We had one for 30 days."

This was 85 guys going Don Larsen on an unbeaten and allegedly unbeatable opponent. This was one team rising to the occasion and the other snorkeling far below it.

Urban Meyer undressed The Vest. Scored 41 points on him, the most ever on a Jim Tressel-coached Ohio State team. Last time Tress' boys gave up more it was 1999 and he was the coach at I-AA Youngstown State.

Chris Leak humiliated Mr. Heisman. To say he won the personal matchup with Troy Smith is like saying Sitting Bull got the best of Custer. It was a massacre and a stunning reversal of fortune for a guy who was widely doubted as a big-game quarterback while Smith was universally saluted.

A Florida defense that has been excellent all year was impenetrable Monday night. The Buckeyes were held to a preposterous 82 yards of offense, which looks like a misprint unless you saw the game.

"It's the greatest feeling to be national champs  I'm just so proud of how hard we worked over the four years, and we finally got to this point; then we took advantage of this opportunity."
-- Florida QB Chris Leak

The Florida offense clicked like it hasn't all year -- arguably like it never has in Meyer's two years in Gainesville. Everything worked: Leak played the smartest and most efficient game of his career; the offensive line combined great push in the running game with great protection in the passing game; the receivers didn't drop a thing; the running backs never put the ball on the ground and rarely took a step backward.

The Gators had zero turnovers. The only other game they did that this season was against I-AA Western Carolina. Last time they had a turnover-free game against a I-A opponent was Nov. 5, 2005, against Vanderbilt.

And even the wobbliest of special teamers had his Villanova moment. Obscure 'Nova guard Harold Jensen earned a footnote in history by making all five of his field goals against Georgetown in '85. Florida kicker Chris Hetland, who was a serially inaccurate 4-of-13 in the regular season, made all two of his field goals for Florida -- both exceeding his season long by a lot.

Combine all the elements and you have a masterpiece. After the opening 16 seconds of kickoff coverage -- when Ohio State's Ted Ginn Jr. began the game with a 93-yard touchdown return -- there wasn't a single thing the Gators did poorly.

"The whole year we felt we hadn't put together a complete game," receiver Jemalle Cornelius said. "Tonight I think we did."

This complete game completes a rainbow career arc for Leak, splashing him down in a pot of gold in his final college game. This was the day Florida fans envisioned when the nation's No. 1 high school quarterback in 2002 committed to the Gators -- but for four years, it rarely looked like it would ever happen.

"My legacy was to get University of Florida football back here," Leak said. "And with my teammates and coaches, we were able to do that."

After two uneven years under Ron Zook and an occasionally painful adjustment season under Meyer, Leak entered 2006 unfulfilled. He had all of the stats but none of the hardware necessary to qualify for historic hero status in Gainesville -- and Meyer told him as much.

It's all about winning titles with him, and Leak had none: not a division title, not a conference title, not a national title.

Now, at last, he has all three.

"He is officially one of the top two quarterbacks to play at the University of Florida," Meyer said, lumping Leak in with Danny Wuerffel -- and ahead of the Gators' QB who won a Heisman Trophy but not a national championship, Steve Spurrier.

Even this senior season had been a choppy ride for Leak. A not-insignificant portion of the Florida fan base rooted for freshman Tim Tebow to beat out Leak, and Tebow's early insertion into the offense as a change-of-pace QB only stoked their ardor. When Tebow was replaced by Leak during the Kentucky game in Gainesville in September, the boos were audible.

Monday night, as Leak stood on the winner's podium and held the crystal football over his head, there were no boos from Gator Nation. Only adulation.

"Nobody deserves it more than Chris Leak," Cornelius said. "The way he played tonight, like a championship quarterback, I'm proud of him."

The prep for this championship moment was intensive and unrelenting over the past month. Offensive coordinator Dan Mullen nearly wore out the Ohio State game film -- and his players.

"I don't think we could watch any more Ohio State games," Mullen said. "I put on the Michigan game yesterday and they said, 'This is about the 75th time. Let's just go play the game, coach.'"

"Oh yeah," he said with a smile. "We watched it again. One more time."

Clearly, Florida found plenty to expose in those tapes. With Leak dealing the ball crisply and quickly into the flats and underneath the Ohio State secondary, the Gators sliced through the Buckeyes for touchdowns in their first three possessions.

By then Leak had completed his first nine passes, on his way to a 25-for-36 night. When receivers weren't open, a guy who had chucked 13 interceptions and fumbled twice this year threw it several yards out of bounds. He was determined not to make any game-turning mistakes, surprisingly leaving those to Smith.

"This is the best game I think he's played," Mullen said. "The most prepared, the most calm he's been. He really wanted to finish his career off right."

Leak's willfully expressionless public mien finally broke Monday. He concluded the game by urging Meyer to employ the "victory" formation. After taking a knee, he leaped to his feet and fired the ball high into the air.

After kneeling for a long moment of prayer on that postgame podium, Leak beamed. Then he hammed. He posed with the crystal football in one hand, then in two hands. He cradled it like a baby and smooched it.

It was something to see this sphinx of a young man so obviously enjoy himself.

"It's the greatest feeling to be national champs," Leak said. " I'm just so proud of how hard we worked over the four years, and we finally got to this point; then we took advantage of this opportunity.

"When you work hard, when you keep doing the right things and you are a good person, you get your schoolwork done, you graduate, when you are doing all the right things, eventually your time is going to come."

Chris Leak's time finally came Monday night, but he and his Florida teammates didn't just finish it off with a championship. They finished it off with something approaching the perfect game.