WHY THE MINUTES LOVES BRUCE, PART XXXVIII
If you saw what we saw -- Tennessee coach Bruce Pearl (2) shirtless and chest-painted in the Volunteers' student section for the Lady Vols' game against No. 1 Duke -- you know why The Minutes cannot get enough of Tennessee's irrepressible Agent Orange.

Think about it: What college basketball coach could possibly take himself un-seriously enough to pull a stunt like that? You think Coach K (3) will join the Cameron Crazies for a Blue Devils women's game? How about Roy Williams (4) putting on a powder-blue toga in Chapel Hill? Here's the ultimate visual: Bob Knight (5) getting half-naked in the student section at Texas Tech -- and refraining from punching anyone.

It could happen only in Knoxville. Never graduate, Bruce.

The Minutes acknowledges that Pearl -- whose game-day orange is usually his sport coat, not his skin -- leads the nation in grandstanding. And there's no small amount of vanity involved in this stunt. (Few coaches are in shape enough to go shirtless in front of anyone other than their wives. Pearl is an obvious exception, and proud of it.) But it's great to see a millionaire coach throw himself into the guts of the game: the student spirit and the atmospheric thrill of a big game.

Just do The Minutes one favor, Bruce: Don't put on the Borat (6) thong bathing suit in public. Ever.

ROTTEN APPLE
St. John's (7) upset Syracuse (8) Sunday afternoon in a game that was noteworthy mostly because it has become such a rarity for a New York City-area college team to do anything substantial. (And even this was only semisubstantial. Nobody is looking at the Orange as any kind of Final Four threat.)

Somehow, NYC has gone MIA in the hoops scene.

Given the amount of talent in the five boroughs and northern New Jersey, this is like the universities in the state of Florida suddenly and unanimously sucking at college football. The Minutes sampled the seasons of 14 New York-area teams and found nobody in the RPI top 65, and only two teams (Hofstra and Fordham) in the top 100.

"It's like this barren wasteland we're operating in," said New York Daily News college basketball writer Dick "Hoops" Weiss (9), who has been covering hoops in that area since Lew Alcindor was a pup. "The problem in New York is, the talent pool is there. You walk into a Catholic League gym and there's 10 coaches from the Big East, all recruiting the same players." 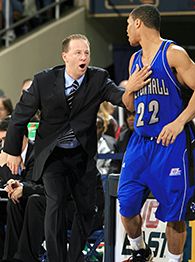 The local Big East affiliates aren't getting their share -- or aren't doing anything with what they get. St. John's, Seton Hall (10) and Rutgers (11) -- are uniformly bad. (Combined record: 28-26 overall, 6-12 in the league, nobody above .500 in Big East play.) They're three of the five teams in the conference with triple-digit RPIs, and they're all NCAA Tournament long shots -- again.

The Red Storm were left in a smoking crater by Mike Jarvis, but in Norm Roberts' third year they returned five starters and were supposed to take a major step forward in the league this season. Instead, they're 11-8 overall, 2-4 in the league, have already lost five home games and are winless on the road in the Big East. Seton Hall and Rutgers, both in their first seasons under new coaches, don't have the talent to take advantage of a weak bottom half of the league.

"The Big East programs in the New York metro area have struggled to gain any measure of consistency because of the amount of coaching changes," Weiss said.

But the big boys have plenty of shady company in the mid-major and low-major ranks.

Thing is, this isn't so much a new development as the continuation of an inglorious century. The area's three Big East members haven't had even a single top-four league finish since 1999-2000. New York City-area teams have won two NCAA Tournament games in the last six years, both in 2004 (Manhattan over Florida, Seton Hall over Arizona).

KINGS (AND JESTERS) OF THE ROAD
League play is brutally beautiful for many reasons, but mostly this: Teams can no longer hide at home. November and December are long gone, and January has been filled with excursions to play quality opponents in front of angry mobs -- and we get to see how they handle it. It's a manhood check, and The Minutes is keeping track of the real men and the teams that don't look tough enough.

Real Men:
Marquette (16) -- Big East road record: 3-1. The Golden Eagles have won three straight Big East games away from home, none of them in easy locales: Connecticut, Louisville and Pittsburgh. The only blemish was a double-digit defeat at Providence. Road ahead: Only four left, none of them impossible, two of them easy commutes from Milwaukee. South Florida (RPI 168), Georgetown (36), DePaul (63), Notre Dame (40). 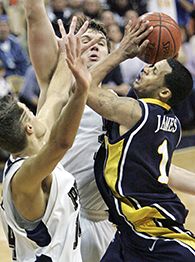 Road Wimps:
Alabama (21) -- The Crimson Tide aren't just 0-2 on the road in SEC play; they're 0-2 with a pair of beatdowns against middling competition. Bama lost to Arkansas (RPI 28) in Fayetteville by 27, then lost to Vanderbilt (67) in Nashville by 21. Bad news for the Tide: there are two more 'Ville trips left on the schedule. Road ahead: Nothing's easy in this league, especially the West (where no team has won a league game away from home yet this season). Auburn (103), LSU (52), Mississippi (95), Florida (29), Tennessee (18), Mississippi State (62). 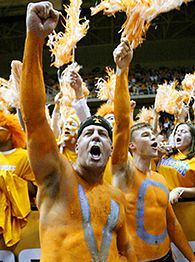 Tennessee (22) -- Maybe Pearl should try coaching shirtless, because he hasn't done much good fully dressed on the road in the league so far. Record: 0-2, with losses to Vanderbilt (RPI 67) by a point and Auburn (103) by three points, after blowing a big lead. Road ahead: No gimmes, especially for a team already struggling outside of Thompson-Boling Arena. Mississippi (95), Kentucky (6), Florida (29), South Carolina (81), Arkansas (28), Georgia (51).

West Virginia (23) -- The frightfully inexperienced Mountaineers are overachieving at home, but it's catching up to them away from Morgantown. Big East road record: 0-3, with losses to Notre Dame (RPI 40), Marquette (26) and Cincinnati (140). It's all defensible until you get to the Cincy loss. Road ahead: Gets progressively tougher. Rutgers (175), Seton Hall (105), Georgetown (36), Providence (55), Pittsburgh (4).

IN A BIG COUNTRY

The 2006-07 season has been billed, with considerable justification, as the Year of the Big Man in college hoops. Thanks to the new draft rules, there are more talented big men passing through higher education at the moment than in at least a decade.

But there is more to this wave than just guys named Noah, Horford, Oden, Durant, Big Baby, Hansbrough and Fazekas. The Minutes salutes a dozen other post powerhouses who are piling up numbers with less fanfare this season:

D.J. White (26), Indiana -- Injuries set him back for two years, but a guy who at first reluctantly stayed to play for Kelvin Sampson has become the centerpiece of a Hoosier resurgence. White is averaging 14.3 points, 7.6 rebounds and 2.2 blocked shots for an Indiana team that has won five in a row and nine of its last 10.

Al Thornton (27), Florida State -- Averaging 17.7 points and 6.2 rebounds while shooting with career-high accuracy from the field and the line.

Randolph Morris (28), Kentucky -- Two years of underachieving have given way to a breakout junior season. Morris is averaging 16.2 points, 8.1 rebounds and 2.2 blocks, and the Wildcats are 9-0 when he grabs at least nine boards.

Mario Boggan (30), Oklahoma State -- He was positively heroic in that three-overtime Lollapalooza against Texas (37 points, 20 rebounds), and might be the most improved player in the country over the past two years. Boggan is averaging 21.4 points and 8.1 rebounds. 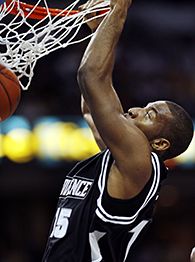 Herbert Hill (31), Providence -- Impressive enough that the 6-10 senior is averaging 17.2 points and 8.4 rebounds. Even more impressive when you consider that he'd never averaged double figures before in his college career. He's racked up double-doubles his past three games.

Kyle Visser (32), Wake Forest -- In the blight of the Demon Deacons' season, it's easy to overlook Visser's 17.4 points and 7.6 rebounds. He has shown signs of wearing down in Wake's current four-game losing streak, but he's still the best thing going in Winston-Salem.

RUTHLESS INTERROGATION
The Minutes recently caught up with its favorite Cinderella Man of the season, Oklahoma State walk-on Tyler Hatch (38). The junior swingman came out of relatively nowhere this season, joining the program after his dad, Mike, became director of student-athlete development for the Cowboys. A lavishly hair-styled guy, who spent time working for a swimming pool service and tending bar in Las Vegas, wound up playing 33 high-pressure minutes in the Game of the Year to date: Okie State's 105-103 triple-OT win over Texas. The Minutes had to know more:

Forde Minutes: I know Oklahoma State is shorthanded, but did you have any idea you'd wind up playing 33 minutes on national TV against Texas?

Hatch: Nope, no idea. There's really no telling with me in my position. I might play five minutes, I might play three, I might play 33. I just try to stay ready in case they need me.

Minutes: How did you wind up out of basketball and working in Las Vegas?

Hatch: I moved out to Vegas in May of 2005, after I played in junior college. I got a blood clot in my leg, and I kind of got tired of the whole basketball thing. I was cleaning pools for five or six months every day in 115-degree weather, which wasn't much fun.

I met a guy who worked at the bar at the Westin Hotel and he helped me get a job. I barbacked for a while, learned the drinks and started bartending. 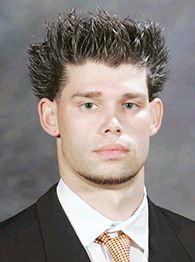 Hatch: It was interesting. You've got so many characters coming in there.

Hatch: A lot of UFC fighters. I think we had Sugar Ray Leonard (39) and a couple other boxers one time.

Minutes: What brought you back to college basketball?

Hatch: I didn't think about it until March last year. My dad had a chance to come in here and get a job, so I decided to go try to be a part of it. I love every bit of it.

Minutes: About the hair  it certainly stands out.

Hatch: It wasn't a big deal. Since my freshman year in college, I've been doing it. I see a lot of people with short hair, so I kind of went on the wild side. People kind of look at me crazy, but a lot of people like it, too.

Minutes: What do the girls think?