Let The Minutes get this off its chest before we get to this week's main course.

Item: Duke (2) got a major assist in its last-second victory over Clemson (3) last week from the home timekeeper and the officials who blew the review of the mismanaged clock. 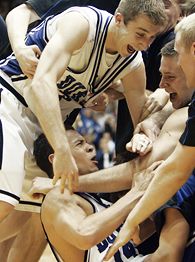 Minutes reaction: It sure would be easier to dismiss the Duke-gets-all-the-breaks chatter if, ahem, Duke didn't get such unforgettable and egregious breaks as this one.

Perhaps the only thing worse than the officials' deducing that an errant inbounds pass and methodically hoisted three-pointer by Vernon Hamilton took six-tenths of a second to complete was the statement released by ACC supervisor of officials John Clougherty. In it, Clougherty -- who was one of the very best with a whistle, by the way -- laid it off as a "timing error." Thing is, timing errors are correctable by competent refs -- and Clougherty's refs proved utterly incompetent in fixing the problem.

Awarded at least two seconds more than it deserved and 4.4 seconds in total, Duke went the length of the court to score the winning basket at the buzzer. (Anything less than 2.5 seconds requires Grant Hill and Christian Laettner.) The Minutes has to give credit to Tigers coach Oliver Purnell, who took his hosing like a man.

"Do I believe in conspiracies? Yes, I do. A Duke conspiracy? No, I don't," he told the Anderson, S.C., Independent Mail.

Now on to this week's pressing issue: Is it just The Minutes, or has an epidemic of horrific court designs swept America? Everywhere you look, normally inoffensive 94-foot-by-50-foot rectangles of hardwood has been overtaken by cheesy, gargantuan logos, profligate paint jobs and/or excessive signage?

Sufficiently alarmed, The Minutes stepped in with the help of colleague Andy Glockner to identify the best and worst college basketball floors in America.

The offenders, grouped by category:

Kansas Jayhawk (5). Why a school with that much tradition would devote so much floor space to a lame cartoon bird is a mystery to The Minutes.

SMU Pony (6). Nearly goes from 3-point line to 3-point line, nose to tail. Add in the fact that the two-point area is all painted red and you have an aesthetic disaster.

Ramkind (9): Colorado State Ram, Rhode Island Ram, Fordham Ram, VCU Ram. We're overrun with ram-related crimes against aesthetics. Clearly, our nation is in desperate need of a graphic artist who can come up with a decent male sheep logo.

Letters/Symbols Visible from Space
Clemson Tiger paw (10), Rutgers "R" (11), Western Illinois initials (12) and Alabama "A" (13). Apparently designed by the same people who form crop circles for aliens to see when landing in our midst.

Liberty lettering (14). Give the Falwellian Flames credit for being original and avoiding center-jump trash. But the words that blare above and below the circle overpower the court. Editor's note: We have been informed that Liberty replaced that floor for this season.

Parquet Faux Pas
Western Illinois, Texas A&M and Massachusetts (15). Just because it worked for the Celtics doesn't mean it will work for you. In fact, most schools with parquet floors are notably lacking in significant hoops tradition.

Southern Illinois (16). In the picture The Minutes saw, there were nine logos on the floor. Looked like an outfield wall in the Carolina League. Then again: If you've got nine, might as well go for double digits. Surely there's a Carbondale muffler shop willing to grab some of the remaining floor space.

Statewide Ugliness
Idaho (17). From Boise to Moscow (Idaho has a towering "I" and a huge script "Vandals") to Pocatello (a not-terrible tiger and block "Idaho State"), this is the land that taste forgot. Runner-up is Kansas, where the Jayhawks and Kansas State Wildcats -- who should know better -- are saved only by the relative restraint of Wichita State. 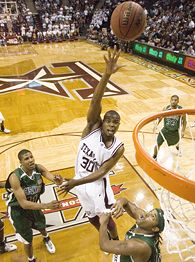 Unacceptable State Outline
Texas A&M (18). The Aggies just had to have a bigger state-of-Texas outline than the Longhorns, so theirs stretches very nearly from key to shining key. Combine that with parquet and a too-large logo on top of the state outline and you have The Minutes' vote for the ugliest floor in America.

Staying Centered
Stanford (20), UCLA (21), Michigan State (22). All of them contain their midcourt logo to midcourt, and keep it simple. Stanford uses its university logo: the "S" and the tree. UCLA's says, of all things, "UCLA." Michigan State goes with a block "S," but takes a small demerit for turning the free-throw circles into basketballs.

Hottie Exemption
Kentucky (23) has a logo larger than its lordly station should countenance. However, occasional center-court appearances of Ashley Judd (24) to wave to the fans have a positive diminishing effect on the overgrown "UK."

Animal On A Leash
Butler (25). They keep the (non-cartoonish) Bulldog logo contained to the center jump circle in hallowed Hinkle Fieldhouse. And the rims are 10 feet high. Just ask Norman Dale.

Montana and Arkansas (26). The Grizzlies get a pass because their Grizzly bear looks semi-authentic, and because he's indigenous. The Razorbacks get a pass on their monster pig because their fans can appreciate the silliness. They wear plastic pig hats, after all.

The Anti-Trend
Arkansas-Little Rock (27) has absolutely nothing but a circle at center court. No words, no logos, no identifier at all. Makes for quite a contrast with the prodigious porcine in Fayetteville.

ADDITION BY SUBTRACTION
Sometimes it takes a loss -- a game, a player, something -- to snap a team into focus. Four programs currently showing they learned something the hard way:

North Carolina (28): Since the Tar Heels were stunned at Virginia Tech, they've trampled four straight opponents -- three on the road, two ranked -- by an average margin of 23.5 points. Their decimation of Arizona in Tucson might have been the single most impressive performance of the season, by anyone.

Kansas: After being upset by Texas Tech, the Jayhawks have spun off three straight wins by an average margin of 23 points. That was capped by the first-half emasculation of Nebraska Monday night in Lincoln. After 17½ minutes, Kansas led 39-6.

Butler: The Bulldogs are now 6-0 since losing in overtime at Illinois-Chicago, capped by a 26-point revenge whipping of the Flames in Indianapolis Monday night. Average margin of victory in this streak: 17.3 points.

Louisville (29): The Cardinals are 3-5 when talented-but-troubled freshman Derrick Caracter (30) plays, 12-1 when he doesn't play due to suspension or coach's decision. Last 10 games Caracter has missed? All Louisville victories. Caracter clearly is having an immediate-impact season -- the opposite of the impact Rick Pitino had envisioned. The less he's around, the better Louisville plays.

The Minutes caught up with what has to be the most law-abiding player in Division I basketball, Wisconsin guard Kammron Taylor (31). In 708 minutes of playing time heading into the 21-1 Badgers' Big Ten showdown game at Indiana, he's been whistled for all of 11 personal fouls. How does he do it in a physical league while playing in a defense-first program? Let Wisconsin's second-leading scorer explain.