INDIANAPOLIS -- The monstrous young man walked into the media room at the Indianapolis Convention Center wearing a gray sweatshirt that said "OL45" on the chest.

When OL45 showed up, reporters got excited. They stampeded behind him to the podium.

In response to the first question, OL45 dispensed the following vital information:

Welcome to the NFL scouting combine, where every eighth of an inch and every hundredth of a second count.

Way too much sometimes.

For the record, OL45 was Joe Thomas of Wisconsin, considered the best offensive lineman in the 2007 draft. He's widely expected to be among the top three players picked. You can canvass a room full of scouts, GMs and draft analysts and be hard-pressed to find someone doubting Thomas. 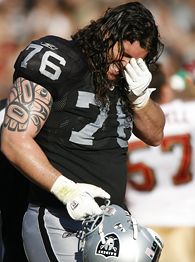 Of course, the last time a Big Ten tackle swaggered into the combine with this big a rep, it was 2004. His name was Robert Gallery, out of Iowa.

"Gallery ... is the most foolproof pick in this year's draft," declared The Sporting News.

Three years later, after an array of defensive ends have blown past Gallery and pulverized a variety of Oakland Raiders quarterbacks, nobody is calling Gallery foolproof. "Bust" is the more common term.

Gallery is instead proof of the foolish notion that a fast 40-yard dash and a monster day at the bench press are the tickets to success in the NFL.

Too bad he can't play.

"I think we're different players," Thomas said when the G-word came up Thursday. "I think I'm very technically sound. ... I think I have great work ethic, and I really study hard."

Those would be three important elements in a successful pro football player. And they won't be worth a damn here at the combine, where it's all about "measurables."

Texas' Justin Blalock started 51 games for the Longhorns and routinely opened holes. Yet at 6-3, there is a strong belief that he's too short to play tackle and might have to switch to guard.

"I realize they like certain attributes for a reason," Blalock said. "I'll let the game tape speak for itself."

Hopefully somebody is listening when the tape is talking.

The measurables have become so important that a cottage industry has grown up around them: Players are packed off by their agents to special camps to work on improving their times in combine drills and reps in the bench press. Arizona apparently has been full of draft prospects who have spent the winter with strength and agility coaches.

This is like taking a course to improve your SAT score while not doing a thing to actually prepare yourself to succeed in college.

"I see a lot of guys who do that," said Thomas, who stayed in Madison to prepare for the combine. "They lose focus on what they're doing in the offseason, which is preparing for an NFL season, as opposed to training to run a fast 40 time."

I understand that you cannot be slow and weak and small and play in the NFL. I understand that the "prototype" for certain positions is based on players who have excelled there. But the size-and-speed snobs who make or break many careers have a bad habit of discriminating against a lot of good players just because they don't fit their prototype.

Jerry Rice would be too slow to star in the NFL by combine standards. Ran a 4.6.

Vince Young? Too dumb, according to the Wonderlic. But not too dumb to be NFL Rookie of the Year.

"I am my height, and I am my current weight. I think there's a lot to be said for how you play as opposed to how you look."
Ryan Harris, former Notre Dame OT on questions about his lack of size

Last year, DeMeco Ryans was the sixth linebacker drafted, taken in the second round by the Houston Texans. He was considered a tick slow in the 40 (4.65) and maybe a tad shorter than ideal (6-1). Ryans was the NFL Defensive Rookie of the Year -- not Houston's No. 1 overall pick Mario Williams (whose measurables were gorgeous, by the way).

Defensive end Elvis Dumervil was busted down to the fourth round despite phenomenal pass-rush productivity at Louisville. The reason? Too short to play defensive end at a shade under 6 feet tall. Some said the only place he could play was inside linebacker.

Dumervil made short people everywhere proud by recording 8½ sacks in '06 for the Denver Broncos.

Only three players were drafted later last year than wide receiver Marques Colston, who went in the seventh round to the Saints. Colston was considered by some to be a tweener -- not big enough to play tight end, too slow to play wideout -- and he didn't run a top-five time among wide receivers in the 40, the vital three-cone drill or the irreplaceable short shuttle at last year's combine.

Meanwhile, Chad Jackson (second round), Derek Hagan (third round), Skyler Green (fourth), Mike Hass (sixth), Devin Aromashodu (seventh) and David Anderson (seventh) were drafted before Colston. All ran faster than he did in the above drills.

Those six combined to make 35 catches as NFL rookies. Colston, whose name stayed on the board until pick No. 252, had 70 catches -- despite missing a couple of games with an ankle injury.

With all that in mind, it was interesting listening to the offensive linemen report their height and weight (Thursday was lineman day at the combine), then wait for the nitpicking to begin.

One reporter eyed Notre Dame offensive tackle Ryan Harris (6-4½, 305) skeptically and wondered whether he was big enough to be an NFL tackle. I loved Harris' answer.

"I can't say anything about that," Harris said. "I am my height, and I am my current weight. I think there's a lot to be said for how you play as opposed to how you look."