PULLMAN, Wash. -- The road verus the ranked has been a mismatch down the stretch of this college basketball season.

Florida has been steamrolled its last three games away from Gainesville. North Carolina is sliding, taking consecutive road losses. Texas A&M just hiccupped in Austin; Wisconsin did the same in Columbus; Georgetown went down in Syracuse; Nevada was upset in Logan by Utah State. 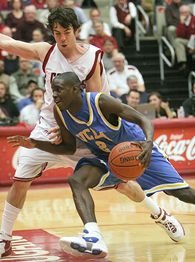 And then there is UCLA. While many of the rest of America's power teams are soiling their dark jerseys, the Bruins quietly have established their credentials as the overall No. 1 seed in the NCAA Tournament and the most mature team in America.

The Bruins came here and beat Washington State 53-45 Thursday night to wrap up an undisputed Pac-10 title. It was their third straight road win, and trust me, nobody has had a better road victory in the last 10 days than this.

"The Palouse" is more fun to say than it is to visit.

Ask the Bruins, who traveled 10 hours Wednesday to reach the high plains of the inland Pacific Northwest. They flew from L.A. to Seattle, then flew to Spokane, then bused 80 miles across a moonscape more populated with pheasant than people and bunkered in bustling Moscow, Idaho -- eight miles down the road from the Washington State campus.

"It's not the funnest place," UCLA point guard Darren Collison said, trying to be polite and honest at the same time.

If you hoop at one of the Pac-10's sunny climes, this is the road trip you dread: a long journey to play a grinder opponent (fewest points allowed in the Pac-10) in see-your-breath country (Thursday night's low was 19 degrees) in the middle of nowhere (yes, there are tougher places to get to than Pullman -- Mars, for example).

"When you're a city kid growing up in L.A., the change in scenery is different," said shooting guard Arron Afflalo. "It's an adjustment."

There they go again, being diplomatic to a fault. The Bruins even waited until they were off the court at Beasley Coliseum and up the ramp -- out of public view -- before doing the chest-bumping and screaming that comes with winning a league title.

"That's us," Collison said. "This is a more humble team, and we're not going to brag about it in front of anybody."

So it's up to us to do the bragging for them.

What you have to love about this UCLA team (26-3, 15-2 in Pac-10 play) is its consistency. Aside from a toss-out loss at West Virginia (unorthodox nonconference opponent in the middle of February) and a two-point January loss at Oregon, the Bruins have turned in only one head-scratcher (seven-point loss at Stanford). They resemble the team that won five straight NCAA games last spring before losing in the title matchup to Florida.

This is a veteran group that never mails it in, never takes a night off on the defensive end and routinely rises to meet the challenge of a quality league that is gunning for the defending Pac-10 champs in powder blue. That's the difference between UCLA and Ohio State: better league, bigger bull's-eye.

"Our toughness is probably the best thing about this team," coach Ben Howland said. "Our mental toughness. I love it."

That toughness was challenged Thursday night, in what ranks among the biggest home games Washington State has ever played.

You have to understand the historic ineptitude of Wazzu basketball: It's been 11 years since the Cougars had a winning record, 13 since they last appeared in the NCAA Tournament, 24 since they last won an NCAA Tournament game. Oh, and the last time they had won a league championship was 1950, in the Pacific Coast Conference North Division.

But Wazzu entered this night a lock for the NCAAs and still alive for at least a share of the Pac-10 title -- a testament to my sincerely held belief that first-year head man Tony Bennett is the national Coach of the Year. And students normally immune to basketball fever have come down with a serious case.

They tried to camp out Tuesday night for seats, only to be shooed away by campus security. Some came back and successfully camped out in 18-degree weather Wednesday night, in defiance of the rules, and Bennett rewarded them with pizza Thursday afternoon. When the gates opened, 4,500 of them stampeded into the lower arena (kudos to the school for giving them so many quality seats) and created a frothing environment.

And UCLA forced them to curb their enthusiasm.

The Bruins rushed out to an 11-4 lead, chloroforming the crowd. Washington State resolutely fought back, finally taking a one-point halftime lead, 23-22, on what would be its only made three-point shot of the night. The building was deafening at that point.

"Our toughness is probably the best thing about this team. Our mental toughness. I love it."
-- UCLA coach Ben Howland

Then the Bruins did it again, attacking inside to throw a 9-0 silencer at the crowd after halftime. Washington State stubbornly came back again, pulling within four and getting a couple shots to close it to two, but couldn't close the deal.

When UCLA built a 10-point lead and made it stand into the latter stages of the second half, it was basically over. No way the Bruins were giving all that up, in a game this methodical.

This is the new Pac-10, as established by Howland and Bennett (and by Tony's father before him, Dick Bennett): If you want to win a title, then you'd better D up.

These were two teams that inhaled the scouting report and committed themselves to making life miserable for the other team's scorers. Time and again, it took long offensive possessions to shake someone free for a makeable shot.

"Other than the fact that we won, this is the kind of game Dick Bennett would enjoy watching," Howland said.

Afflalo is a national Player of the Year candidate largely for his ability to shoot pretty jumpers, but he showed the other side of his game Thursday night. He chased Washington State's Derrick Low relentlessly off screens, shadowing his shooting hand and refusing to give him a good look a the hoop.

The only shot Low made in eight attempts banked in from straight on. While it's fair to wonder whether the junior guard is wearing down at the end of by far his most minutes-intensive season, it's also fair to give Afflalo credit for making him work so hard.

"I had a little tunnel vision on him," Afflalo said. "Trying to contest his shots."

Offensively, UCLA effectively played keep-away in the second half by going to its pick-and-roll game and putting the ball in Collison's hands. If any current college player is better at running that bread-and-butter play, I haven't seen him.

A 50 percent 3-point shooter, Collison must be hedged hard off the screen at the top of the key to prevent open looks. But that only opens up the screener to slip to the hoop, and the Pac-10's No. 2 assist man will find that guy if he's open.

Thursday night, that guy was open a lot. UCLA tortured Washington State with the pick and roll, as post players Alfred Aboya and Luc Richard Mbah a Moute were a combined 9 of 12 from the field.

"That's what UCLA does," said Wazzu center Aron Baynes. "They'll make you pay if you break down."

That's what a mature team does. A championship team. And nobody looks more like a champion at this moment than UCLA.