CHARLESTON, S.C. -- Stephen Curry grew up in Charlotte, N.C., with a shooting stroke and a pedigree that should have commanded the curiosity of every school in the Atlantic Coast Conference.

He's the son of 16-year NBA gunner Dell Curry, merely one of the finest shooters in the history of the sport. And Stephen can fill it up like his old man.

Yet instead of balling in the bright lights of the ACC with fellow freshman guards Ty Lawson, Javaris Crittenton, Greivis Vasquez, Wayne Ellington and Gerald Henderson, Curry wound up off Broadway in the Southern Conference. 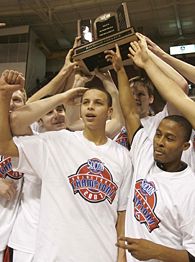 Now the ACC's big blunder has helped put Davidson in the Big Dance.

Curry is getting all the shots and all the minutes he wants in the SoCon, leading the league in scoring at 21.2 points per game. His clutch 29 in 39½ minutes Saturday night carried the baby Wildcats (no seniors) to the league tournament title, 72-65 over College of Charleston.

In three games here, Curry scored 79 points on 54 shots -- including 24 jacks in the title game -- and was named the tourney Most Valuable Player. He left Charleston's defenders lunging too late and coach Bobby Cremins moaning at his fate.

"When I see Seth Greenberg, I'm going to give him a piece of my mind," Cremins joked. "The kid wanted to follow his dad to Virginia Tech, and I'm disappointed in Seth right now."

That's because Seth's tepid response to Curry's desire to be a Hokie has become Cremins' headache in the SoCon.

Greenberg offered Curry a chance to walk on -- which, truth be told, was more interest than the rest of the ACC showed combined. Curry's final decision came down to Davidson, Winthrop, Virginia Commonwealth or the walk-on offer from Tech.

On a Friday afternoon in September 2005, Davidson coach Bob McKillop and assistant Matt Matheny culminated more than a year of dogged recruiting when they sat in Curry's living room and made their final pitch. Curry committed on the spot.

"Coach and I were dancing in the living room," Matheny said.

And now they're dancing in March, thanks in large part to a slim, 6-foot-1 kid who looks 14 but plays like he's 24. McKillop had seen enough of Curry in high school to tell Davidson's fans before the season that he is "one special player."

"I boldly got up on a pedestal and proclaimed that, because I thought he could handle that," McKillop said. "He's upset that he's not mentioned among the top five guards in the country. That's a catalyst to keep him going."

"What really impressed me, probably halfway through the year, you could tell defenses were committed to stop him. But he continued to do what did before he got that attention. He's fearless. He wants the ball during crunch time, and that's something you can't coach."
-- Dell Curry

So how did the ACC whiff on a guy who has scored 700 points as a freshman, just 22 fewer than the fellow in burnt orange named Durant? How did that league come to the conclusion that it already had enough stone-cold shooters and didn't need a guy who has made 117 threes and is shooting 41 percent behind the arc?

That was during the first half against the Cougars, whose upset bid was buoyed by a hometown crowd in North Charleston Coliseum. Point guard Jason Richards, the rock of Davidson's team, went to the bench with two fouls at the 11:22 mark of the half, score tied at 15.

That moved Curry to the point. On press row, the writers who cover Davidson regularly announced an impending crisis.

Sure enough, Charleston edged out to a 28-24 lead. That's when McKillop called timeout and intercepted Curry before he got to the team huddle. According to Curry, the most underrated coach in America very calmly told his young star to "not try to hit home runs, and run our system we'd been running all year."

It might have gone against the coach's orders, but the kid hit the next four minutes out of the park.

Curry scored on a drive. Then hit a 15-footer, was fouled and made the free throw. Then swished a jumper from 18 feet. Then hit a nifty step-back J off the bounce. Then hit a fall-away on his way to the floor after running into his own man. He scored 11 straight Davidson points, helping the Wildcats into halftime with a 37-35 lead.

But in the second half Davidson saw an eight-point lead turn into a five-point deficit with 7½ minutes to play. In the red-and-black fan section, anxiety was spiking. A team that had piled up 28 victories was on the verge of blowing it against a gritty underdog, a loss that would most likely exile Davidson bitterly to the NIT.

There is no Championship Week pressure like the pressure on a tournament favorite in a one-bid league. And Davidson looked like it was feeling it.

But then backup guard William Archambault of Quebec -- one of five foreign players on McKillop's intriguing roster -- hit a floater off a curl into the lane to make it 56-53. And after a Charleston turnover and a TV timeout, it was Curry time again.

Cremins, who came out of retirement this season after spending years on the beach in Hilton Head, was up exhorting his team out of the timeout, pounding his chest with both fists like Tarzan. But the king of the jungle was Curry, who came open behind a double screen on the wing off a great call by McKillop. The kid coolly drained the three to tie the game -- then, two possessions later, drained another to tie it again at 59.

After center Boris Meno scored on a nice pick-and-slip feed from Richards, was fouled and made the free throw, Davidson had the lead for good at 62-59. All that remained were 4½ minutes of cool execution under pressure by a team that has grown up remarkably this season.

Nobody more than Curry, who committed an ungodly 13 turnovers in his first college game. But McKillop let him play through it and learn, and he's now on a path that could make him the best player in Davidson history.

When they announced Curry as the tourney MVP, his mom, Sonya, jumped and yelled and waved her hands. Next to her, a stoic Dell Curry allowed himself a small smile and softly clapped his hands.

"He had a good game in a pressure situation," Dell said. "As an ex-NBA player, I look at the flaws. He still made some mistakes, but he didn't hang his head after those mistakes.

"I knew he was a good player. I didn't know how consistent he'd be. I was waiting for him to hit that freshman wall, but he didn't. (Indeed, Curry had just one single-digit scoring game all year.) What really impressed me, probably halfway through the year, you could tell defenses were committed to stop him. But he continued to do what did before he got that attention.

"He's fearless. He wants the ball during crunch time, and that's something you can't coach."

Maybe it's just in the genes.