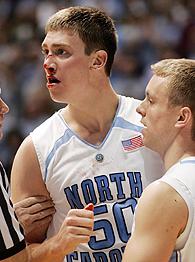 And boy, was it heated on that front Sunday.

America's two most image-obsessed basketball programs were in image overdrive after a nondescript game -- by Carolina-Duke standards -- turned into a scene from "Scarface" in the final seconds. On this blood-soaked afternoon, the moral high ground was claimed by the Tar Heels while the Blue Devils were left protesting their innocence amid charges of a cheap shot to Carolina's star player.

Tyler Hansbrough got the bloody nose. Duke got the black eye.

And if there is anything the goody-goody Dukies hate more than losing to North Carolina, it's losing and being called dirty at the same time.

That's what 21,750 Tar Heels fans were screaming at Duke guard Gerald Henderson after his flying forearm drop split the bridge of Hansbrough's beak with 14.5 seconds left in an 86-72 Carolina victory. Henderson was called for, in officialese, "a flagrant foul for a confrontational and combative action."

He was ejected, and by NCAA rule will miss the Blue Devils' first (and possibly only) game in the ACC tournament Thursday against North Carolina State. All three Duke assistant coaches accompanied Henderson off the floor, walking through as visceral a gantlet of booing as I can remember for a player in a college gym.

But it was Hansbrough who left the court before Henderson, blood gushing from his nose and leaving a scarlet trail of spatters all the way to the locker room. If he hadn't been in need of prompt medical attention, you get the feeling the guy they call "Psycho T" gladly would have gone after Henderson or anyone else in a Duke uniform.

"I thought it was something out of a movie," Carolina guard Bobby Frasor said. "Just the way he was bleeding and how furious -- you could see in his eyes how mad he was. Thank goodness he got his emotions under control in the locker room. He got so angry, it was kind of crazy.

Smart kid, Frasor. From "SportsCenter" to "Cold Pizza" to PTI to "Around the Horn," we've got hot video.

This was not the first confrontation in Duke-Carolina history. Heels coach Matt Doherty got into it with Duke scrub Andre Buckner a couple of years ago, and there are folks around here who still remember when Carolina's Larry Brown and Donnie Walsh dusted it up with Duke's Art Heyman in the '60s.

But this had to set a rivalry record for most blood shed. Maybe even a national record. Chuck Wepner never hemorrhaged like Hansbrough did.

The question is motive.

After viewing the replay several times, I agree that the blow to the face did not appear to be intentional. Henderson was going to block Hansbrough's shot, then Hansbrough's arm was pulled down and the ball flew out and Henderson's forearm smashed Psycho T's face. This was not a premeditated knockout.

However, Henderson appeared to be going in with the intent to deliver an enthusiastically hard foul. There is a place in the game for hard fouls, for forcefully preventing easy baskets, for occasionally planting an opponent on his rear end.

But when the hard foul goes wrong, for whatever reason, you run the risk of it accidentally turning into assault and battery. Like this.

And when that happens, you pay the price with an ejection and a suspension. The officials did the right thing in tossing Henderson.

Not surprisingly, Mike Krzyzewski did not agree with a punishment that will take one of his few explosive athletes out of the lineup Thursday night. He said he'd like to see the ACC office take another look at the play, and commissioner John Swofford probably already has received a call or two from the Duke hierarchy expressing its spin on events.

"We'll take all responsibility, but if there's any way Gerald Henderson did that intentionally, that's crazy," Krzyzewski said. "That's not the way he plays and not the way we play. ... I feel badly for Tyler and what happened, but there was no intent."

Then, rather shamefully, Krzyzewski fired a subtle but unmistakable shot right back at Roy Williams. After saying all the right things, he had to say one catty thing. 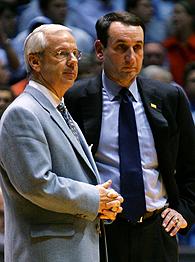 (There was only so much falling upon the sword Coach K could tolerate, right there in the Dean Dome after getting his head handed to him. Taking the high road is always easier when you're beating Carolina on a regular basis, which Duke isn't doing anymore.)

"The game was over before that," he said. "I mean the outcome of the game, let's put it that way. That's unfortunate, too, that those people were in the game in that play. Maybe this wouldn't have happened."

So there. Hansbrough had it coming for playing mop-up minutes in a double-digit win.

For the record, Krzyzewski later said, "We should have probably both had our walk-ons in."

Also for the record, Krzyzewski was calling timeout with 50 seconds left and his team down by 13. So he clearly didn't think it was walk-on time at that point.

Naturally, this blame-the-victim jab went over wonderfully with Williams.

"I don't understand that," Williams responded, when told of Krzyzewski's barb.

Playing starters at garbage time, he was told.

"Gerald was in," Williams said, although Henderson did not start. "I mean, both teams had 'em in. Anybody else got any questions?"

Before anyone could ask one, Williams veered back to the topic, talking about the famous Carolina comeback from eight points down with 17 seconds left against Duke in the 1970s. In other words, anything can happen.

But then that didn't seem to be carrying the day, so Williams pointed out that he had a sub for Hansbrough at the scorer's table while Frasor was shooting his foul shots.

"I was trying to get Tyler out of the game," Williams said. "It's not my fault that Tyler got the offensive rebound and somebody else missed the sucker. But that's enough about that junk."

Of course, talking about that junk at least changed the subject from the junk that Duke has become, at least in comparison to its normal self. This is clearly the worst Blue Devils team since Krzyzewski's dark period in the mid-90s when back trouble chased him off the sideline for part of the 1994-95 season.

Long one of the prettiest offensive teams in college basketball, Duke now is slow, sloppy and lacking create-your-own-shot scorers. It has 57 more turnovers than assists, has not proved capable of strafing teams from the perimeter as usual and doesn't get enough back-to-the-basket scoring from its big men.

That's why the Blue Devils are 22-9 and just 8-8 in ACC play. And that's why they're starting the ACC tournament as a No. 7 seed, a stunning tumble from Duke's normal spot at or very near the top.

With the Blue Devils obviously inferior to the Heels, their only chance to win this game and derail Carolina's ACC title hopes was to junk the game up and win on effort. Part of that, it could be argued, was asserting a level of toughness Carolina might not match.

That's been one of the knocks on these Tar Heels, who were supposed to dominate the ACC but wound up backing into the title thanks to losses by Virginia and Virginia Tech. At times, it looked as though Duke was going to test the Heels' toughness by smacking them around.

In the end, Henderson clearly took the physical play thing too far. Took it all the way to the locker room and an invitation to wear street clothes in Tampa on Thursday night.

So Duke wakes up Monday with a fresh black eye and a fourth loss to Carolina in the past five meetings. For the image-obsessed Blue Devils, it gets no worse than being bad and being dirty.