FAIRBORN, Ohio -- Brad Brownell was walking back to the Nutter Center court for the second half of a toweringly tense Horizon League championship game Tuesday night when he did the strangest thing.

The Wright State coach walked over to the edge of the stands and hugged a tall guy in a baseball cap. Said a few words, smiled at the guy and then continued on to the court. 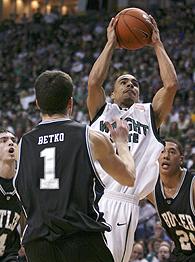 Think about it: What tunnel-visioned coach in the middle of a dogfight, do-or-die game, with an NCAA Tournament bid hanging in the balance, detours out of his way to say hello to someone in the stands?

The tall guy in the hat was Todd Hendley, who plays forward at North Carolina-Wilmington. His coach last year at UNCW was Brad Brownell.

A college kid doesn't spend part of his spring break traveling 660 miles to see his ex-coach unless there is an extraordinary bond between the two. For the same reason, a college coach with a two-point lead and 20 minutes to play before winning a league title doesn't swerve out of his way to embrace the kid.

"It's wonderful," Brownell said of that moment. "Great kid. I still miss him, like I miss a lot of the players."

Just ask the folks in Wilmington. They're acutely aware of what they're missing.

Brownell has been the right guy at the right time at Wright State. But only after UNCW got it all wrong.

The school let a stone-cold winner walk last year, after he'd taken the Seahawks to the NCAA Tournament for the second time in four seasons. A dispute between Brownell and athletic director Mike Capaccio made the coach mad enough to leave a place dear to his heart and make an at-best lateral move.

Here's how it's worked out for the two:

Wright State had a storm-the-floor party here Tuesday night to celebrate its first NCAA Tournament berth since 1993, after beating Butler 60-55. Meanwhile, North Carolina-Wilmington put away the balls and uniforms last week after its worst season in ages.

Last year, pre-Brownell, Wright State was 13-15, its fourth straight non-winning season. With him, Wright State is 23-9 and champions of the Horizon League -- both the regular season and the league tournament. Butler got all the pub this season, but the Raiders got all the hardware.

With Brownell last year, Wilmington went 25-8 and won both the regular-season and conference tournaments in the Colonial Athletic Association. Without him, Wilmington was a 7-22 mess this season under Benny Moss, a former assistant at Charlotte.

There were mitigating factors in the collapse at UNCW: the team's best returning player, T.J. Carter, missed all season with an injury. And several key seniors graduated off the '06 CAA champs.

But you have to believe that if Brad Brownell is the coach there, the Seahawks are a lot closer to 22-7 than 7-22 this year.

Which is why, if I'm Capaccio, Wednesday might be a great day to call in sick.

And if I'm Brownell, I would be feeling a powerful urge to say the four smallest words in the English language: I told you so.

But Brownell isn't that kind of guy. If anything, he was quite candid Tuesday night in talking about his conflicted feelings over what's transpired the past 11 months.

"I've heard from a lot of people at UNCW. In a lot of ways, Wilmington, North Carolina, is my home. I was there for 12 years, that's where my children were born. I view that place with the fondest of memories. Those were great times for me, and I think of those as some of the happiest days of my life.

"[Leaving] was very difficult, extremely difficult. Probably one of the toughest decisions I've made in my life.  It's unfortunate that some circumstances forced me to leave, but this has been a great year for me, too. Helped me grow, probably, as a coach."

Here's what he's grown into: one of the hottest young (38 years old) coaches in America. Which means Wright State would be wise to learn from history and reward Brownell for his fine work, before the bigger fish start circling.

"[Leaving] was very difficult, extremely difficult. Probably one of the toughest decisions I've made in my life. … It's unfortunate that some circumstances forced me to leave, but this has been a great year for me, too. Helped me grow, probably, as a coach."
-- Wright State coach Brad Brownell

Especially when the second school had little in the way of tangible success before Brownell got here. There were some experienced players at Wright State -- most notably senior guard DaShaun Wood, a first-team All-Horizon League pick last season -- but they were in for a touch of culture shock.

The opening message from Brownell to his players: "That it wasn't going to be easy. That I was going to demand excellence in all areas of their lives, that there would be days they wouldn't like me much."

Those days came during offseason conditioning, during academic checkups, during fairly routine intrusions into the players' lives to see how they were progressing.

"We were, at times, a little bit suffocating," Brownell said.

The suffocation was worth it Tuesday night, when the players wore broad smiles and championship hats looped with strands of championship nets.

"The first time Coach B and I met together, with my father, he said, 'I want you and your teammates to be cutting some nets down,'" senior forward Drew Burleson said. "It's just amazing to be doing that right now."

The turnaround has been quick, but not exactly sudden. It took some time. Some weeding out (two players transferred in August). Some buying in. Some bonding together.

Wood pointed to Christmas break as a key time for the Raiders.

"Twenty-four-seven, at Christmas break, coach had us together," he said. "We were around each other all the time. It almost was nerve-wracking."

But look what can come of it: a team that began the year 3-5, with losses to Coastal Carolina, Chicago State, Marshall and Bowling Green, finished the season like a steamroller. Wright State has won 11 of its last 12 games entering the NCAAs.

In the process of getting there, the Raiders bounced a bubble team Tuesday. From West Lafayette, Ind. to Springfield, Mo., to Starkville, teams have to wonder if they were shot out of the Big Dance by a 5-foot-9 kid few people had ever seen play before this night.

Wood was the Horizon Player of the Year, and he certainly was the player of the moment with the season on the line. He scored 27 of the Raiders' 60 points, grabbed eight of their 28 rebounds and handed out five of their 15 assists.

Calling Wood quick is like calling Einstein smart. Bit of an understatement. And the fact that he can fill it up (6-of-10 from three-point range against Butler, 57 threes on the season) makes him a tough matchup -- even if he is a midget.

Butler star guard A.J. Graves got the first assignment and was no match for Wood, surrendering 18 points in less than 18 minutes. Then Butler coach Todd Lickliter rotated two taller players -- Drew Streicher and Willie Veasley -- on Wood with better results.

In fact, the 6-7 Streicher pitched a shutout when matched with Wood for more than 12 minutes of game clock. But with 65 seconds left, Wood finally escaped Streicher's reach.

He curled off a screen and rose for the three-pointer that gave Wright State the lead for good, 55-52. From there Wright State hung on and sent several thousand students spilling onto the floor in celebration.

"He's good," Lickliter said of Wood. "He's able to keep you honest with his outside shot, but his forte is driving. He scores multiple ways. It's going to be a chore for you to stop him.

"I thought we were behind on the trail [of Wood off the screen] and our hedge [by the man guarding the screener] was really low. That was probably my fault."

When Lickliter stood up to exit his news conference, Brownell was just coming in. Lickliter extended his hand in congratulations.

That always seems to be the case with Brad Brownell. No matter where he's coaching.