Cinderella, the plucky princess of March Madness, died a quick and undramatic death over the weekend. She was 12. 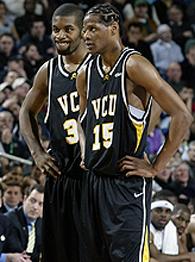 Check the chalk outline of her body, produced by the chalk-heavy outcomes in this NCAA Tournament: This marks the first time since 1995 that the Big Dance arrived at the Sweet 16 without at least one double-digit seed along for the ride.

Pause with us while we mourn Cindy's passing for a moment.

Goodbye, Virginia Commonwealth. Sorry you couldn't come along another round, but beating Duke and taking Pittsburgh to OT made for a pretty swell weekend.

They were the last double-digit seeds standing. Without them, the tenor changes.

There is no George Mason or Bradley left in this dance -- no mid-major school that barely squeaked in and never was given a chance to win even a single game, much less two. No Wisconsin-Milwaukee of '05 (although that team's coach is here, now dressed in orange). No Chattanooga or Valparaiso or Miami (Ohio) or Missouri State or Kent State, to name a few double-digit seeds that played into the second weekend in recent years.

The 2007 version of a glass-slippered party crasher is No. 7 seed UNLV, which is a joke. As I've been saying since the brackets were unveiled, Vegas was criminally underrated by the selection committee. The Runnin' Rebels were a 4- or 5-seed in underdog's clothing.

Of the nine teams I believed could win the whole thing, eight remain. Only Texas (I was seduced by Kevin Durant) has been dismissed.

Bottom line: Either the committee really did its job well (except for Vegas) or Cinderella has had a fatal four days.

This doesn't mean she can't (and won't) rise from the dead in years to come. But for the time being, we'll have to stuff a sock in all the parity talk. Or at least revise it down to, say, the top 30.

That's about where the competitive balance seemed to stop this year, after only five first-round upsets by seed (three in the tossup 8-9 games) and five in the second round (three in the tossup 4-5 games). At least the games got closer and more dramatic Friday and Saturday, bookended by a distressingly dull Thursday and a rather unremarkable Sunday.

Even the quartet of schools from the smaller conferences come wearing regulation basketball sneaks, not glass slippers.

Memphis, king of Conference USA, has been a national title contender two years running. UNLV of the Mountain West won 30 games and ranks 10th in the RPI.

Even Southern Illinois of the Missouri Valley Conference and Butler of the Horizon League didn't exactly fall off the turnip truck on the way to the Sweet 16. Both were ranked for much of this season, sport tremendous power numbers and were locks to be at-large selections -- which, ultimately, they both were after losing in the final game of their league tournaments.

And they were respected enough by the selection committee to be seeded fourth and fifth, respectively.

Within the past five years, both schools got to the Sweet 16 the hard way, as double-digit seeds. Their progress up the seed ladder was in part paved by the mid-major successes of previous seasons.

Despite their well-earned seeds, SIU and Butler will revert back to major underdog status now. Butler takes on the defending national champion and overall No. 1 seed, Florida. Southern Illinois gets a shot at the hottest team in the tournament, Kansas.

If either wins, we'll be back to rhapsodizing about the achievements of the little guys. But neither will qualify as Cinderella.

She's stretched out on a cold slab in the March Madness morgue.