ST. LOUIS -- Tubby Smith does not do confrontation, does not revel in having difficult conversations and does not like to disappoint people. 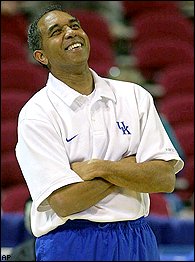 All those personality traits complicated Smith's final two years at Kentucky and ultimately complicated his leaving for Minnesota. According to a university source at Kentucky, Smith was reluctant to tell anyone he was going.

Minnesota never came up when Smith met with his boss, athletic director Mitch Barnhart, Wednesday night -- even though, as ESPN.com's Andy Katz reported, Smith's agent, Ricky Lefft, had been involved for weeks in discussions with Gophers athletic director Joel Maturi.

When Smith met with his players Thursday afternoon, it is unclear whether he specifically told them he was taking the Minnesota job, or was just interested in it. And he was slow to call UK officials from Minneapolis on Thursday evening with his final decision -- not doing so until well after multiple media reports had him accepting the job.

This is a rough timetable of events surrounding Smith's stunning move, starting at noon Wednesday:

There was no indication of anything unusual going on with Smith that afternoon, as he attended the opening-round games of the Kentucky high school Sweet 16 state tournament in Rupp Arena. Smith watched pretournament favorite Scott County play, with speculation centering on whether the coach was evaluating guard Matt Walls as either a walk-on or scholarship candidate.

Smith left Rupp before the second session of games. Assistant Reggie Hanson stayed behind to further scout and evaluate players.

That evening, Smith met with Barnhart, his boss. They had met previously in Atlanta at the Southeastern Conference tournament and in Chicago during the opening two rounds of the NCAA Tournament, and this meeting was part of an ongoing conversation about the direction of the program.

Sources say Barnhart told the embattled Smith that he wanted him to remain as coach, but he also wanted him to formulate a plan for how to return Kentucky to prominence after consecutive disappointing seasons. Like every other major athletic department, Kentucky has plenty of big-dollar boosters with an impassioned investment in the program's success -- but Barnhart has retained autonomy when it comes to hiring and firing, in consultation with President Lee Todd.

Tubby's future was Barnhart's call, and he'd already made it in his mind. Smith would stay, provided there was a road map in place for returning to prominence.

Part of what the UK brass wanted to see was an improved recruiting performance, which in turn would necessitate improved organization by Smith. And improved recruiting would have to start with a significant shuffling of his coaching staff, which has been intact in the three full-time assistant positions for five years.

Last year at this time, Smith and Barnhart discussed staff changes within the basketball program, but the coach never followed up by doing anything substantive. That was despite a public vow that there would be "changes" during the offseason. They ultimately consisted of hiring a new strength coach and a new director of operations.

This time around, window dressing wasn't going to fly.

By Thursday morning, the Minnesota movement was starting to percolate. Barnhart received a call at 8 a.m. from Maturi asking formal permission to interview Smith. The UK administration had heard a rumor last week of Smith having some interest in Minnesota, but there have been annual rumors about him leaving Lexington -- for the Philadelphia 76ers, for Virginia, etc. -- and he never went anywhere.

This, however, was different.

At midday, Lefft telephoned to say that Smith was seriously considering the job and was planning to go to Minneapolis to visit the campus. By this point, Kentucky knew it was serious.

Smith called a meeting with his players at 1:30 p.m. Thursday, then delayed it until 2:30 p.m. How much he told them in that meeting is unclear -- but as word of the Minnesota-Tubby connection spread like wildfire throughout the commonwealth and the rest of the nation, Kentucky's administration still did not know for sure that Smith was leaving.

After Smith met the players, deputy athletic director Rob Mullens addressed the team. His role was to calm the waters and to let the players know that they would still be taken care of in the event of a coaching change.

At 4:30 p.m., UK released a statement that said, in part, "The Associated Press is reporting that the University of Minnesota is confirming the appointment of Coach Smith to their program. However Coach Smith has not confirmed with UK officials that he has taken the job."

Left hanging, Kentucky sought confirmation from Smith and Lefft. At 6 p.m., Lefft called and said Smith would be contacting Barnhart immediately with his final decision. Thirty-five minutes later, Smith finally made the call.

Nine minutes after that, the school issued a release with quotes from Barnhart and Todd wishing Smith well. Todd also said in the statement that he and Barnhart have "talked extensively about the process for hiring a new coach of Kentucky basketball." That indicates the Kentucky brass wasn't sitting around until 6:30 Thursday completely unaware that this day might come.

Now that it has arrived, the athletic department source said to expect a thorough and in-depth search. Kentucky would appear to have nothing but time on its hands.

Top candidate Billy Donovan of Florida will be busy for at least one more night of basketball -- and probably several more. And the longer Florida's season lasts, the more time Kentucky has to formulate a full search plan if Donovan turns the Wildcats down.

The chase to replace Tubby Smith has just begun.