ST. LOUIS -- The Detroit public schools might not be producing many top-notch geographers, but they do put out a lot of very good basketball players. 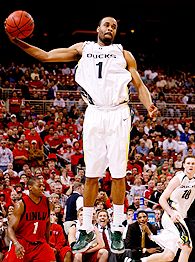 Some of whom end up playing in places they didn't know existed.

Porter learned that there was such a thing as Oregon as a sophomore at Renaissance, when teammate Malik Hairston blazed the Oregon Trail out of the Motor City. Porter followed two years later, and these two Ducks out of Midwest water have helped fuel an unexpected dash to the Elite Eight.

The question of how a school of moderate hoops reputation and no significant recruiting history in that area suddenly tapped into Detroit is a good one. The answer wasn't very clear Saturday.

"With the kids in Detroit, Kenny Payne on my staff is an amazing individual that's done a tremendous amount of good for our program," Oregon head coach Ernie Kent said. "When I had an opportunity to hire him, it opened up the door in a big way to our recruiting into Chicago and to Detroit because he's so well-known and well-respected back there."

That's all well and good, but one thing in that answer doesn't add up: Payne grew up in Mississippi, went to school in Louisville and played pro basketball in Philadelphia, the Pacific Northwest (in the CBA), and overseas. Oregon was his first coaching job. So which part of that career path suggests that Payne is well-known and well-respected in Detroit and Chicago?

Nevertheless, let's assume there was a connection and Payne was the guy who opened up Detroit for Oregon. I asked Hairston about how Payne recruited him.

Hairston got one thing right: Payne is a great guy. But contrary to what Kent said, Payne didn't recruit Hairston. And how was he known for his "skill development" if he'd never coached a day in his life before coming to Oregon at the same time as Hairston?

In order to make sense of this, you have to know the common link between Malik Hairston and Kenny Payne. His name is William Wesley.

He's known in some circles as "Worldwide Wes" for his ability to pop up anywhere, at any given time: in the midst of the brawl in The Palace a couple years ago; in company with LeBron James or Allen Iverson or Michael Jordan; courtside at the Nike All-America Camp (he's particularly present at Nike events); in front-row seats for Pistons playoff games; and he'll pop up at a few college games, too.

Wes was in the Alamodome Saturday, cheering on Memphis and his buddy John Calipari. And word is he'll be in the Edward Jones Dome here Sunday to cheer for his old friend Kenny Payne and Detroit youngsters Malik Hairston and Tajuan Porter.

Wesley's ties to Payne go back to Payne's playing days at Louisville. Wes was a close friend of Cardinals Billy Thompson and Milt Wagner -- stars of the 1986 national champions who knew Wesley while growing up in Camden, N.J. It was Wes who helped shepherd Wagner's son, Dajuan, through his one season of college basketball at Memphis. Wes was a fixture at Memphis practices and games, and Milt wound up on the staff as director of basketball operations.

Payne was a freshman on that '86 team with Thompson and Wagner. More than 14 years after finishing his career in Louisville, Payne returned to the school to get his college degree. Wesley has always loved telling people that story.

Wesley eventually established himself in Detroit and has been involved with The Family, an AAU team that is supported by Pistons guard Richard Hamilton. Hairston and Porter both played for The Family.

Wesley also has friends in Chicago and is said to be tight with prep superstar guard Derrick Rose -- who has signed with Memphis. Which is, of course, where guard Chris Douglas-Roberts -- another Detroit kid who played for The Family -- currently stars.

So, yeah, Wes is connected. And Payne is connected to Wes. And Kent credits Payne with working the Detroit pipeline. And the Detroit Ducks are key reasons why Oregon is in its first regional final since 2002.

Nice how it all works out, isn't it?

The Oregon media guide touts Hairston as the program's highest-profile recruit since the 1970s, but it came as something of a surprise in May 2004 when the McDonald's All-American chose the Ducks over Kansas, Michigan and UCLA.

"I definitely didn't know too much about Oregon basketball," Hairston said. "I was being recruited by UCLA and I was watching UCLA and Oregon play. That was the very first time I watched Oregon play. As I began to watch them more and saw the way that they played, the pro-style offense, the way the guards were successful, it made me very interested."

Seems possible to me. How you feel about that is open to interpretation.

Hairston said the people involved in his decision where to go to school were his parents, brother, sister and Speedy Walker, coach of The Family. He did not mention Worldwide Wes.

Hairston has gone on to become the Ducks' 26th 1,000-point career scorer. He's averaged double figures his entire career and is a key member of this team, despite missing time early with injuries and often playing out of position at power forward.

Porter, all of 5 feet, 6 inches, has been one of the most explosive freshmen in the country. He blew up UNLV for 33 points and eight 3s Friday night and is second on the team in scoring at 14.8 points per game.

Porter said he was not recruited by any school other than Oregon. He also said his family and Speedy Walker helped him with his decision.

Any input from William Wesley?

It's serendipitous that Wes, friend and confidante of so many Nike luminaries, should have a close friend on staff at the ultimate Nike school, Oregon. The Ducks are so tight with The Swoosh that Nike founder Phil Knight and his entourage swaggered into the postgame news conference here Friday night and applauded the Oregon players and Kent when they came in to answer questions.

Porter said Knight is around quite often.

"He's a great man," Porter said. "He's around a lot. I run into him a lot in our locker room after games."

Amazing the kind of people you can hang out with when you move to a state you never knew existed.