Now that this chalktastic NCAA Tournament is headed for the last dance in Atlanta, we can all congratulate ourselves on being so smart. 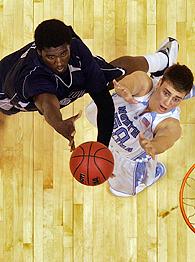 The NCAA Tournament selection committee can pat itself on the back for a seeding process that proved almost bulletproof. Two No. 1 seeds and two No. 2s have advanced, making this the most upset-resistant Final Four in 14 years, since three No. 1s and a No. 2 advanced. All four top seeds made the regional final.

The preseason pollsters can think highly of themselves. Florida, UCLA, Ohio State and Georgetown all began the year ranked in the top eight in the Associated Press poll.

And 161,869 of you hoops Nostradami out there can pop your jerseys and pound your chests for correctly predicting the entire quartet of Final Four teams in ESPN.com's Tournament Challenge. (Myself among them, thankewverymuch. This almost makes up for utterly butchering my bowl picks.)

But predictability begets power. Which means there are no flukes headed to the Georgia Dome, no scrappy overachievers, no teams that should feel just happy to be here. We've got serious talent and sensational matchups, geographic diversity and no landslide favorite from here on in.

Florida gets the edge, but not a huge edge. Because everyone else in this quartet is a bona fide great team.

This is Springsteen, Bono, Jay-Z and Jagger coming together to swagger. This is De Niro, Denzel, Damon and Depp convening to read scripts. This is good stuff.

After two weeks of games that often have been a quart low on surprises and a few shots short of dramatic, we now head to a Final Four of fairly immense proportions.

And I'm not just talking about the all-Goliath showdown between 7-foot-2, 278-pound Roy Hibbert and 7-foot, 280-pound Greg Oden in the first semifinal. (A match made in NBA GM heaven.)

"Any team that's left at this stage of the game, we can't relax because if you relax, it's over. And the other team knows that if they relax, it's over. One of us is going home. Now is the time to really step it up, and there's no excuses at this point."
-- Florida's Al Horford

I'm also talking big winners. Every team arrives at the Final Four with 30 wins, a first in NCAA Tournament history. Every team won its conference regular-season championship. Three of the four won their conference tournament (UCLA is the lone exception).

We've got big hair (Joakim Noah), big biceps (Al Horford) and the potential for a big pay raise (if Florida's Billy Donovan listens to an expected pitch from Kentucky to become its next coach).

We've got big tradition. UCLA is hunting an unprecedented 12th national title. Every team in the four already owns at least one NCAA championship banner, which hasn't happened since 1995.

And we've got big leagues. The Big Ten, SEC, Pac-10 and Big East all are represented, diffusing conference bragging rights until we crown a champion. Meanwhile, it's ACCya later to John Swofford's blue-blood league, which misses the Final Four for the second year in a row. Last time that happened: 1979-80.

So there is plenty of XL to this Final Four. But we've also got the three R's: revenge, repeat and rookies.

UCLA-Florida is revenge vs. repeat. Florida's bid to become the first back-to-back titlist since Duke 1991-92 must go through the team it squashed in the final last year, UCLA. No way this game goes as easily and emphatically to the Gators as it did then.

And Florida is finding the path to a repeat much harder than the path to the first title. When asked whether the pressure might be off now, and the Gators might relax and just play, Florida center Al Horford laughed.

"I mean, we play UCLA," Horford said. "Any team that's left at this stage of the game, we can't relax because if you relax, it's over. And the other team knows that if they relax, it's over. One of us is going home. Now is the time to really step it up, and there's no excuses at this point." 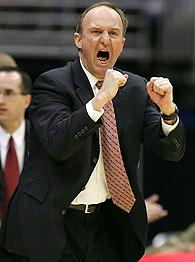 Ohio State-Georgetown is rookie vs. rookie. Neither Buckeyes coach Thad Matta nor Hoyas coach John Thompson III has taken a team this far before.

Both earned their stripes by going through a Final Four veteran to get here. Matta's Ohio State team beat John Calipari's Memphis squad (in the process, Memphis center Joey Dorsey shrank from 6-foot-10 and mouthy to 4-foot-8 and meek). Thompson's Georgetown beat Roy Williams' North Carolina team when the Tar Heels staged a complete work stoppage down the stretch and in overtime.

Matta and JT3 will match wits and nervous tics. Matta will be working his ritual chewing gum, while Thompson can draw X's and O's on his clipboard only with blue pens. Let the luckiest superstitious man win, proceeding to his first national title game.

The two semifinals are competitive enough that the predictions finally get tough. But when the going gets tough, the predictors stay with what got them here.

When midnight strikes on April 3, it says here that Florida will have beaten Georgetown in the final, Billy Donovan will have moved up another spot in the coaching pantheon and the Oh-Fours (plus Lee Humphrey) will go down as one of the greatest starting fives in college basketball history.