ATLANTA -- One of the running themes of this NCAA Tournament is whether Florida has the mettle to become the first repeat national champion since Duke in 1991 and '92.

But instead of comparing these Gators to those Blue Devils, we might be missing the mark. Better, perhaps, to compare UCLA to Duke of 1990-91.

Duke was atomized in the '90 championship game by UNLV, 103-73 -- still the widest championship-game margin in history. Then the Blue Devils got a rematch with the defending champs and prohibitive repeat favorites in the '91 Final Four semifinals, turned the tables and shocked the world.

UCLA's position is almost identical. The final margin last year wasn't as bad (16 points instead of 30), but the beatdown was every bit as vicious. The Bruins were outclassed from the opening tip. Now they face the pre-tournament favorites in the semifinals, trying to derail a repeat and regain respect from a team that toyed with them a year ago. 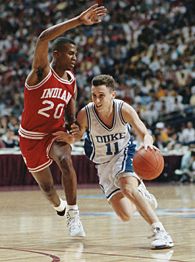 He was the great point guard on those Duke teams in the early '90s. As a freshman, Hurley endured what had to be the low point of his college career: trying to play while sick to his stomach, he was overwhelmed by UNLV's defensive pressure, went 0 for 3 from the field, scored two points, handed out three assists and committed five turnovers.

"I was hoping to never have that humiliation again," Hurley said.

He didn't. As a sophomore, Hurley was heroic in the rematch. He scored 12 points, dished out seven assists and had just three turnovers in 40 minutes against that same UNLV pressure.

"A few years ago I saw footage of me walking into that [second] game against Vegas," Hurley said, "and it looked like my eyes were coming out of my head. I was so focused."

That focus and resolve helped Duke turn humiliation into a coronation in a year's time. To follow that same flight plan, the Bruins must do three things:

Like UCLA, Duke '91 lost three starters but came back strong to win its league. The Blue Devils powered through their first four NCAA Tournament games, winning each by at least 14 points to set the rematch in Indianapolis.

Hurley remembers how the talk of UNLV as a super power worked as motivation for the Blue Devils. In truth, Vegas was a super power: winner of 45 straight games, ranked No. 1 all season, undefeated, crushing NCAA Tournament opponents by an average of nearly 18 points a game.

"I listened to a lot of that for a week leading up to that," Hurley said. "I think that added fuel to our fire. We knew how good we were playing. Internally, we did believe we could beat them."

The Bruins should arrive in Atlanta feeling similarly. They're a team with nothing to lose, playing a team chasing immortality. And being forced to relive the carnage of '06 all week will harden their resolve to change the outcome this time around. 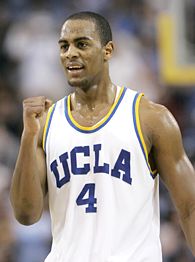 "It was horrible," UCLA guard Arron Afflalo said of last year's title game. "I hate to lose moreso than I like winning."

Duke established that there would be no hangover from 1990, and no intimidation either. It took a 14-6 lead on Vegas in '91.

"The first four minutes we jumped on 'em quick," Hurley said. "We showed them we were going to be there."

The first four minutes could be vital Saturday as well. With Joakim Noah swatting away almost everything inside early last year, the Bruins quickly appeared cowed. They'll need to project the opposite mentality this time around.

"There's no mystery what's going to be in the mind of our players," Afflalo said. "But at the same time, you don't want to come out overly excited. But we want to beat Florida."

• Keep their heads and execute late.

After the emotion wears off, it will be time to simply perform. The longer the game remains in the balance, the more the pressure should shift to the shoulders of the favorite and defending champion.

UNLV '91 rarely was caught in a close game, especially after rolling through the Big West Conference at 18-0. Duke, on the other hand, was tested often in going 11-3 in the ACC.

"We were really battle-tested," Hurley said. "I think their conference schedule didn't really prepare them very well. We put that game pressure on 'em."

When point guard Greg Anthony fouled out with the Rebels holding a three-point lead with less than four minutes to go, the Vegas machine stalled. UNLV scored only three more points after Anthony went out.

Foul trouble could be similarly pivotal for the Gators, especially point guard Taurean Green (not likely; he hasn't fouled out this year) or post man Al Horford (fouled out in two of Florida's five losses).

No matter who's on the floor, Florida has, at times, played like a team that feels the burden of repeating. But if the Gators pull it off for the first time in 15 years, Hurley will salute them.

"If they do it, they're well-deserving of it," he said. "All those guys passed up opportunities to do other things. For them to come back and do what they've done is very impressive."

But the former Dookie is living proof of how much things can change in a single season -- and beyond. After winning the rematch and effectively (with help from the NCAA) putting UNLV out of business, Duke then went on to that repeat.

With superstar recruit Kevin Love coming in next year, UCLA could continue following the Blue Devils' path. But first, the Bruins have to beat the Gators on Saturday -- and even though Duke established a blueprint for how to avenge a Final Four blowout, following it won't be easy.