Some brief chitchat revealed, sure enough, that he was from Lexington, Ky. This was too perfect. I had to ask.

"Are you here trying to recruit a coach?"

So there you have it, from the bookie daddy to the scalper son to the doorstep of the Florida hotel. Billy Donovan to Kentucky. Already done.

If it weren't coming from such an unimpeachable source, I'd doubt it.

It takes a unique arrogance to believe a coach would spend time during his pursuit of a repeat national title to hammer out an agreement on another job. Either that or a unique insanity. 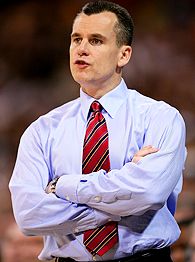 But the fact is this: BillyMania has enveloped the bluegrass ever since Tubby Smith surprisingly walked for Minnesota, and now it has been exported to Atlanta. It further permeated the Georgia Dome Friday afternoon when ESPN.com reported that Kentucky is prepared to start the bidding for Billy The Kid at seven years and between $2.8 million and $3.5 million per year.

Donovan's task is to ignore that loud, impatient and often irrational mania for three more days. Not since Roy Williams was faced with leaving Kansas for North Carolina in 2003 has a Final Four hummed with this much job intrigue.

Just don't expect Donovan to cuss on live TV when asked about it, the way Williams did.

Donovan has said more than once this tournament that he doesn't even take his cell phone on road trips, in an effort to eliminate distractions. But his single-minded focus is being challenged here, with a Cadillac job open and he being the only candidate who matters at the moment. Human nature being what it is, Kentucky thoughts would have to creep in on the few quiet moments between dissecting the UCLA pick-and-roll.

As for allowing Kentucky details to creep in: That's what agents and search firms are for. They get the negotiation ball rolling while the main characters maintain plausible deniability when asked about contact.

Funny thing is, two different and opposing winds seem to be blowing through Atlanta when it comes to this topic. There is the whirlwind of gossip generated by the commingling of about 2,000 coaches and media members, and there is the steady breeze from within the Florida camp.

Whether spurred by reliable or bogus information, the buzz at the parties and in the hotel lobbies is growing that Donovan will go to Kentucky. But once you get past Scalper Boy and into the Florida team hotel, you don't find any corroborating evidence from the inside.

On Thursday night, velvet ropes discouraged visitors from the hotel's mezzanine level, where the Gators were meeting to watch film of national semifinal opponent UCLA. Discouraged, but did not prevent.

On the second floor, Florida's coaches emerged for a five-minute study break and seemed relaxed and upbeat. Based on a brief conversation, you'd have to guess that Kentucky was nowhere near Donovan's mental radar screen at that moment.

"All we're focused on is UCLA," Foley said for what might have been the millionth time this week, before relaxing.

Inside Gator Nation, the confidence remains unshaken. They see too many reasons for Donovan to stay: a program he built himself; the fact that his father, in-laws and sister all have moved to Florida; the problem of butting heads with mentor and former coach Rick Pitino at Louisville; the chance to further dominate a fertile recruiting state.

And on the other side sits Kentucky's one great hope: that Donovan wants to be king of what Pitino once called "The Roman Empire of college basketball." The basketball coach never takes a back seat to the football coach at Kentucky, never has to wonder whether the games will sell out, never has to scrounge for media attention.

As one prominent college coach put it, "It's still the Yankees."

The problem has come in the timing, which forced all this front and center during the most important part of Florida's season. That has put Donovan in a difficult spot.

He's developed a stock answer to the Kentucky questions -- an answer that in no way ends the speculation, without overly fanning the flames. UK, meanwhile, has maintained a respectful distance and silence while the Gators still are playing.

But nature abhors a vacuum, and a coaching search occurring within a news vacuum just won't fly. Especially in a state like Kentucky.

So rumors have flown and omens have been cited. Overreaction to everything has been the norm.

If you want to take speculation to the extreme, feel free to wonder about the private jet that flew from Naples, Fla., to Gainesville to Lexington Wednesday morning, then back to Gainesville that afternoon. There could be a dozen logical explanations, but isn't it more fun to speculate that it was Christine Donovan shopping for a horse farm?

If you'd like an omen to consider, there was the presence of former Kentucky star forward Winston Bennett in the stands at the Dome Friday, watching the Gators practice and appearing to take notes.

So there are a couple more reasons to let the rumor mill go wild. Run with it.

Then again, there's no need for more rumors. Scalper Boy says it's already a done deal.