ATLANTA -- I hate to be repetitive, but Florida plays Ohio State for the national title Monday night.

It was a Monday night in January when we last saw this happen. Different sport, different location, but this result should be about the same as the BCS title game:

Today, this is an unprecedented double: the same two schools playing for the national championship in the glamour sports of football and men's basketball. A few years from now, it might be routine. 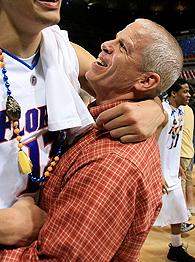 We could be heading into the Megaprogram Era in college sports, when the biggest and richest athletic departments bury their smaller brethren beneath an avalanche of trophies and titles. The Georgetowns (no Big East Conference football revenues) and George Masons (no football, period) could be rare sights at future Final Fours.

The Megaprograms don't get much bigger and richer than Ohio State ($102 million athletic budget) vs. Florida ($70 million). Two traditional football powers have poured enough into basketball to reach the final night of both seasons, and that could portend a national trend.

In recent times, the decades-old line of distinction between "football school" and "basketball school" has been blurred. An increasing number of athletic programs dominated by the pointed ball are experiencing success with the roundball.

"More and more, I think you see that happening," said Florida's Jeremy Foley, the hottest athletic director in history.

The school Steve Spurrier put on the map is 40 minutes from completing an unheard-of basketball-football-basketball triple crown of successive championships (and Spurrier is nowhere in sight while it's been happening). The Gators are leading what seems to be a nationwide trend of gridiron trickle-down economic prosperity.

Football doesn't just drive the bus. It does tune-ups and changes the oil, too.

Six members of this year's Sweet 16 traditionally have been football-first schools: Florida, Ohio State, USC, Tennessee, Texas A&M and Oregon. Thirteen schools that advanced to the round of 32 in this tournament have played in at least one BCS bowl game this century.

The monstrous monetary windfalls available to athletic departments with successful football programs in big-time football leagues has helped spur success in other sports. That's most notable at the moment in the other revenue sport, men's hoops.

But if you ask Foley, it takes more than just a pile of cash to win in new areas.

"I don't know if that's as much revenue-related as commitment-related, or right coach-related," Foley said.

He's right in one respect: Schools motivated to succeed in more than one sport generally do, and their success rate is higher when they hire good leaders of those sports.

But the term "commitment" in college sports is often a euphemism for "willing to spend a lot of money." In the new era, rainmaker ADs line up boosters to shell out millions for naming rights on new buildings. Repugnant as the facilities arms race on college campuses may be, your school can be left behind if it doesn't build up.

USC is playing its first year in a spectacular new basketball arena. Tennessee is redoing Thompson-Boling Arena. Florida built a practice facility a few years ago that was so cutting edge that Kentucky's athletic officials toured it to get ideas for their school's own building.

Back in the day, the idea of Kentucky trailing Florida in terms of basketball facilities was ludicrous.

Coaches like to sell those bell-and-whistle buildings to recruits. They like to take private jets on recruiting trips. And they like to be paid top dollar for their work. 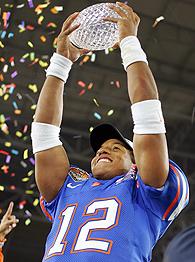 Here again, football schools are especially well-equipped to take care of their successful basketball coaches. Foley and Kentucky are on the brink of what figures to be a record-setting bidding war for the services of Florida's coach, Billy Donovan. Ohio State has redone coach Thad Matta's contract twice in his three years in Columbus. Texas A&M and coach Billy Gillispie just agreed last week to a whopping new contract. Texas has paid handsomely in recent years to keep Rick Barnes happy in Austin.

Given the way this thing is headed, we're likely to see more big-shot athletic programs win titles in both revenue sports. Right now, it's an exclusive club.

Since the wire services began awarding football national championships in 1936 and the NCAA basketball tournament began in 1939, only seven schools have won at least one title in each sport: Michigan, Michigan State, Maryland, UCLA (split football title in 1954), Ohio State, Syracuse and Florida.

After the Buckeyes and Gators, here are the next five schools that have shed their label as one-dimensional athletic programs and could make a run at national titles in both sports:

USC. If the Trojans keep Tim Floyd in place for the long haul, they'll mount a legitimate and intriguing challenge to Ben Howland and UCLA. Floyd is recruiting well and could have a powerhouse team next year -- if all his players stay in school and all-world recruit O.J. Mayo doesn't prove to be an all-world cancer. The football program, meanwhile, should start 2007 ranked No. 1.

Texas. Keeping Kevin Durant for one more year would seem an impossible dream, but the Longhorns have a lot of other great young talent to build around and the in-state recruiting base is excellent. And Texas football will remain among the top five programs in the country for the foreseeable future.

Louisville. Depending who leaves and who stays at Georgetown, the Cardinals could be the preseason Big East favorites in '07-08. The question is whether the football program can maintain its top-10 status now that Bobby Petrino has made his oily exit to the NFL. Tom Jurich might be second only to Foley among the nation's top athletic directors.

Tennessee. In two seasons, Bruce Pearl has pushed the Volunteers back into the NCAA Tournament -- winning one game last year and two this year, and very nearly eliminating Ohio State in the Sweet 16. Football is actually the program having traction issues, but putting 110,000 fans in the Neyland Stadium stands keeps the cash registers ringing.

Wisconsin. Bret Bielema was the top rookie football coach in the country last season. Bo Ryan has established a premier program in basketball. The consistency here is admirable.

Here are five notorious underachievers -- schools from big-time conferences that make a ton of money off football and can't translate it into basketball success:

Penn State. The Nittany Lions make a mint on football and have nothing to show for it on the hardwood. Does JoePa bury all the profits in coffee cans in the hills surrounding State College?

Auburn. Has missed the past four NCAA Tournaments, and six of the past seven. Jeff Lebo is trying to produce a slow and steady turnaround but hasn't yet broken through in the fluid SEC West.

Clemson. Winning the NIT (the Tigers lost to West Virginia in the finals) would have been nice. Going to the NCAAs would be nicer. Next year will mark the 10th anniversary of the Tigers' last trip to the Big Dance. (Coach at the time: Rick Barnes.) Oliver Purnell, you are on the clock.

Florida State. Leonard Hamilton, you're on the clock, too. Despite several recruiting coups, the Seminoles also haven't been to the NCAA Tournament since 1998.

Nebraska. Yet another school that hasn't inhabited Bracketville since '98. Even worse, the Cornhuskers are still looking for their first NCAA Tournament victory. Ever.

Duke. Simply pathetic in football, in a league where even modest success is not impossible (See: Forest, Wake).

North Carolina. Not many good reasons for the Tar Heels' football softness over the years, especially given the area recruiting base. Maybe Butch Davis can turn it around.

Arizona. Times are changing under Mike Stoops, but Lute Olson has been carrying this school for years.

Illinois. The ultimate football underachiever. Having Ron Zook as coach doesn't seem likely to change that status anytime soon, no matter how startling his recruiting class.

Kentucky. The Wildcats turned a corner this past fall by winning eight games, including a bowl, and should be at least as good this year. But upward mobility in the SEC East is always difficult.