Didn't matter how late the call came. Pee Wee would be waiting up for this one. 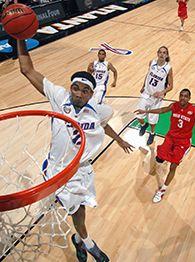 On the other end was his son, Corey. The freshly named Most Outstanding Player of the 2007 Final Four.

On this happiest of occasions, both men wanted -- no, needed -- to share it. Even if the moment couldn't be shared in person, their mutual gratitude needed to be expressed.

"I'm going to tell him I love him and thank you," Corey Brewer said Monday night shortly after playing the catalyst in the Gators' 84-75 defeat of Ohio State.

"I'm going to tell him thank you for being so good to me," Pee Wee Brewer said, country accent thicker than gravy, in a phone interview with ESPN.com.

Corey wanted to thank his dad for giving him his blessing to follow his heart last year and stay in school. Pee Wee wanted to thank his son for turning that third year of college ball into a second straight year of immense joy -- for the family and for all of Scattersville.

Pee Wee was not able to attend the Final Four -- hasn't been able to see Corey play in person much at all in his college career. Diabetes forced the amputation of his right leg below the knee in October, just the latest health challenge for a man who has had open-heart surgery, had balloon angioplasties and lost a finger to a spider bite.

Losing the leg has been a severe setback for a man who spent years farming amid the dusty heat of middle Tennessee tobacco patches. He's expecting to be fitted for a prosthesis soon after spending the winter nearly immobilized.

"It's hard," Pee Wee said. "You don't want to be penned up in four walls, where everyone's got to help you. It's no good like that."

But Pee Wee is no complainer. Says he feels fine -- in fact, rarely better than he felt Monday night.

The customary gaggle of friends and family gathered at the Brewers' house for a cookout. "Half the community," Pee Wee said. Then they screamed and jumped and danced watching the small-town local boy lead Florida back to the mountaintop.

It will thrill him even more when Corey comes home sometime in the next couple of weeks and presents his three-inch strand of Georgia Dome net to Pee Wee.

When Corey comes home, he'll see the place his basketball life began: "My little raggedy goal at home, with the wooden backboard." It's attached to the side of the house, and Brewer said the rim has been known to tilt.

That hoop is where Brewer said he spent hours shooting baskets and dreaming of playing in the Final Four. But even his wildest dreams probably didn't entail back-to-back Final Four coronations and MOP status.

Brewer did Monday night to the Buckeyes what he did Saturday night to the UCLA Bruins. He delivered an early flurry of points that rocked the underdogs back on their heels, letting them know the champions were ready to take care of business.

Against UCLA, Brewer had 15 of Florida's 29 first-half points and finished with a game-high 19. Against Ohio State, he had 11 points at intermission as Florida sprinted to an 11-point lead and never fully relinquished it.

A guy who was hitting 31 percent of his 3-point shots before the Final Four cashed 7 of 10 3s here. Combine that flourishing stroke with Brewer's reputation as the finest wing defender in college basketball, and you have to think the kid made a lot of money this weekend.

If, that is, the junior is leaving college for the pros.

Of all the Florida sophomores who decided to come back to school last spring, setting in motion the first repeat in 15 years, Brewer was the one who sacrificed most. Joakim Noah, Al Horford and Taurean Green all come from professional athlete families -- they have some money. Brewer was the son of a disabled tobacco farmer facing major health expenses.

When the Oh-Fours made their joint decision, they worried most about Brewer and his situation. It was always hard to get go-along, get-along Corey to do anything outside the group consensus.

"Corey's just all about everybody else," teammate Chris Richard said.

Like father, like son. Pee Wee Brewer wasn't about to use those health issues to pressure Corey into a pro career before he was ready.

"He told me to be happy," Corey said on the court just minutes after the game. "And I'm happy. I guess he knows what he's talking about."

Said Pee Wee: "When he told me they were all going to go back, I was just thrilled."

Now there will be a new round of discussions about the future. Corey remained noncommittal on the subject after the game.

If it's either/or, expect them all to leave. They've done enough for themselves, their school and college basketball as a whole. Now it might be time for Corey to do a little more for his dad.

An NBA salary would take care of that a whole lot better than a monthly scholarship check.

But Monday night was not about the NBA, not about the future, not about anything but a precious present for the ultimate team. If any group can reaffirm your faith in the power of everyone pulling together for a common goal, this Florida team is it.

When it was over and the first net had been snipped, there arrived a scene sweet enough to choke up a mobster.

The Gators gathered together at the foot of the podium and eagerly turned toward the Georgia Dome video board to watch "One Shining Moment," the annual CBS highlight reel of great moments from the tournament just completed.

At one end of the gathering sat Noah and Brewer, arm in arm, swaying and singing the words to the sappy song. Corey sang the chorus with the earnest look of a small boy on his face. Then he stopped and bit his lip, feeling the emotion tug at him.

"It's unreal," he said. "'One Shining Moment' almost makes you want to cry. Second time I got to watch it, our team got to watch it. Just to see what goes into people playing in the NCAA Tournament -- that's why you love college basketball, all the guys diving on the floor, everybody playing as hard as they can play just to be in this moment where we are right now."

The Florida Gators are, in sum, why we love college basketball. And Corey Brewer being named the MOP of this NCAA Tournament was a shining moment indeed.

You could feel the glow of that moment all the way to Scattersville, where an ailing father waited for a phone call from his loyal son.