As I've stated before in this space, I hate people who complain about the refs.

Perhaps this is an exercise in self-hatred then. Because I'm here today to complain about the refs. 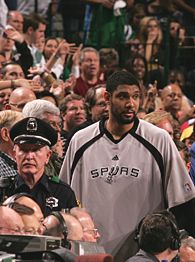 Joey Crawford's pugnacious ejection this week of Tim Duncan (of all people) for laughing (of all things) forced a re-evaluation. I still have almost no tolerance for fans mewling about how their team got screwed by the refs. But some of the basketball officiating this spring has festered into an open sore that needs to be cauterized.

There are two episodes in particular that have threatened to undermine a beautiful game at what is supposed to be its peak time:

1. The Crawford toss of bench-bound Duncan on Sunday. Thanks to that bit of knee-jerk zebra vigilantism, we are guaranteed to enter the NBA playoffs with officiating a front-burner topic. You can almost hear David Stern's blood pressure spiking. Think the commish wants to spend all spring defending the integrity of his referees, in a drawn-out replay of his response to Mark Cuban's petulant 2006 Finals conspiracy-theory tantrums?

2. The Final Four travesty in Atlanta. Three refs seemed to be racing each other to saddle the stars of one national semifinal -- Ohio State's Greg Oden and Georgetown's Roy Hibbert -- with fouls, ruining one of the most-anticipated matchups in the past 25 years. It was almost as if they had made a bet: First guy to force the big men to the bench drinks free after the game. Result: Oden played 20 minutes and Hibbert 24. But at least we got to see a lot of very dramatic posturing by the guys who are supposed to blend into the hardwood.

There just hasn't been enough blending in lately, on the two highest levels of American basketball. That's a problem.

I readily acknowledge that officiating a basketball game is one of the hardest tasks in sports. Lord knows I don't want to do it. Too many things happen too fast for refs to call a great game every time out. And when they blow a call, there is a nation full of critics -- armed with instant replay -- ready to crucify them.

So most of the time, they get my respect for doing a truly thankless job. But these recent examples of what I'd call control-freak officiating are troublesome for the sport.

Sometimes, you watch these guys -- it's not just Crawford or that diva of the college game, Ted Valentine -- and wonder whether there is a persecution complex/power trip associated with putting that whistle in the mouth. Instead of serving as levelheaded stewards of the game vested with the authority to enforce fair play, they occasionally come across as bouncers in a bad mood while juicing on Dianabol.

Spoiling for a fight with the first guy who mouths off, that is.

According to Duncan, a fight literally was what Crawford had in mind Sunday. One of the NBA's leading citizens insists that Crawford challenged him to fight.

If so, that's an unconscionable loss of self-control and perspective. I'm not exonerating the notably whiny Duncan, especially if Crawford's assertion that he called the ref a "piece of [doo-doo]" is true. But an official is useless if he goes Dirty Harry on anyone who insults him.

"So most of the time, they get my respect for doing a truly thankless job. But these recent examples of what I'd call control-freak officiating are troublesome for the sport."

Thus, Crawford has guaranteed he'll be part of the story line in these playoffs -- even after his suspension. If it were my call, he'd sit for at least the first round, then wouldn't come within 100 miles of calling a Spurs game the rest of the playoffs.

The Final Four debacle was less egregious but indicative of the same problem: officials who seemed overly eager to show who's boss, at the expense of the matchup every fan in America wanted to see.

If ever there were a game to let the big men play, this was it. It never happened, thanks to the hypervigilance of Dick Cartmell, Mike Kitts and (of course) Valentine.

Houston coach Tom Penders sagely said on ESPN Radio before the Georgetown-Ohio State game that he'd know how the game was going to play out when he saw which officials walked on the floor. I wonder whether Penders took one look at the crew and left the Georgia Dome before tip-off.

But this was only the culmination of a whistle-stop NCAA Tournament. As my friend Eric Crawford of the Louisville Courier-Journal reported last month, second-round NCAA Tournament games averaged nearly 38 personal fouls and fans were treated to 1,981 free throws in the first two rounds.

Nothing is quite as thrilling as watching almost 2,000 foul shots in four days.

That's partly caused by poor play and poor coaching, which resulted in the abandonment of offensive flow late in the shot clock and the inevitable headfirst drive and ensuing block-charge call. (There are no jump-stop jump shots in college ball anymore.) But it's also partly caused by compulsive whistle blowing, often in anticipation of a foul that never happens.

Mostly, the March Madness foulfest gave fans a chance to boo and coaches a chance to posture on national TV. (One of my favorite moments every March is when some outraged coach wheels around at the scorer's table and shouts something at the attending member of the NCAA men's basketball committee about the officiating. As if the committee member might stop the game right then and there to address the obvious wrong inflicted upon the persecuted coach's team.) It also mucked up the games.

I understand that reactions to officiating intensify as the stakes rise -- when championships are on the line and elimination is a real threat. Nobody wants to simply admit the other team was better. But it's time for American basketball to seriously examine ways to bolster the credibility of its officials.

I'd start with an officiating summit this offseason. Invite everyone who wears a whistle on the Division I and NBA levels, invite the NBA brass, invite the men's basketball committee.

Discuss and debate the difficult art of calling a basketball game. I can envision breakout seminars on charging, physical play in the post and dealing with Bob Huggins.

Let the refs vent. Hear their side of it. Consider their suggestions for improving rules or their working environment. Give them a voice in the proceedings.

But also hammer home a renewed understanding of what the officials' role is. If they want to grab the spotlight, hey, they should be willing to stand up for a 20-minute postgame news conference, too, just like the players and coaches.

We certainly know now what an official's role isn't. It's not to hijack a game the way we've seen a few vigilante refs do this spring.