Congratulations and condolences to Joe Staley of Central Michigan.

He is part standard-bearer for small-time football, part Mr. Irrelevant. 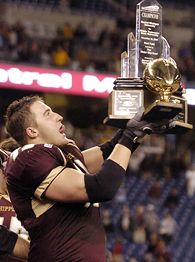 Staley, an offensive tackle, was the 28th selection in the National Football League draft Saturday.

That made him the first player outside the big six conferences (ACC, Big East, Big Ten, Big 12, Pac-10, SEC) or Notre Dame to be drafted in 2007. That's a point of pride.

Being selected 28th also made Staley the lowest first selection from outside the college game's power elite since the NFL-AFL merger in 1970. That's a point of concern for everyone who doesn't have an automatic spot at the BCS money trough.

After the free-flowing festival of projection and prognostication all weekend, here's the one hard-and-fast fact to come out of this draft: The NFL has never been less interested in spending top dollar on low-profile football players from low-profile programs than it is right now.

The old NFL saying is, "If you can play, we'll find you." Well, either the collegians outside the BCS conferences cannot play, or the league is no longer trying as hard to find them. Because the trend is to use top picks on the glamour boys from the glamour teams in the glamour conferences.

Last April it took 27 picks to get a non-BCS draftee: Memphis running back DeAngelo Williams. That was the record -- until this year, when Staley slipped one slot lower.

If you want to know how much things have changed, consider this:

Every year in the 1970s, at least one top-10 pick was used on a player who fit the definition of a mid-major, low-major or minor-level college player. That included three overall No. 1 picks: Terry Bradshaw of Louisiana Tech, John Matuszak of Tampa and Ed "Too Tall" Jones of Tennessee State.

In the here and now, only one non-BCS conference player has been selected in the top 10 in the past four years: quarterback Alex Smith, who went No. 1 in 2005 -- and whose Utah team ultimately wound up crashing a BCS bowl game. (Calling Urban Meyer's undefeated Utes a mid-major is really a misnomer.)

Two non-quarterbacks from non-BCS schools have been Top 10 picks this decade, and both of those were so obvious that I'm guessing even Matt Millen could see it: LaDainian Tomlinson of TCU in 2001 and Brian Urlacher of New Mexico in 2000. One other non-BCS player, tackle Jordan Gross of Utah, was taken No. 8 in 2003. He's been a four-year starter.

There were 26 Top 10 picks from low-profile schools in the 1970s, including guys named Walter Payton (Jackson State) and Phil Simms (Morehead State). There have been six such picks in the past 12 years.

A few theories about this trend:

• Parity is overrated. The biggest schools get the best players, now more than ever. The power programs are either scouting better, or admissions are looser, or players are simply saying no more often to the local small schools in favor of the big-time programs that play on TV and pack huge stadiums and put on jam-packed testing days for NFL scouts.

Whatever the reason, the field is tilted all the more to the power schools in the power conferences. Which makes things like Boise State going 13-0 and winning the Fiesta Bowl all the more amazing.

• The slow decline of football at historically black colleges and universities is more evident than ever. Back when college campuses were less integrated, the first round was dotted with African-American stars from Grambling, Jackson State, Alcorn State, North Carolina A&T and so on. But there hasn't been an HBCU first-rounder since 2000. Clearly, the best African-American athletes no longer look to the HBCUs as a place of either first or last resort.

• Conference expansion must be considered. Two years ago, Amobi Okoye would have been a non-BCS draftee out of Louisville. Today he's a Big East draftee. But realignment only changes the status of a single first-round pick over the past two years.

Of course, it should be noted that there still were 69 players picked from outside the BCS teams, as opposed to 186 picks on players from the 66 teams who form college football's "in" crowd. You still had guys from Lane, Brown, Towson State and Wingate being picked -- just none of them very high.

And it's true that some of this could simply be cyclical. Next fall, for example, we're looking at a Heisman Trophy race that features two Western Athletic Conference players: Hawaii quarterback Colt Brennan and Boise State running back Ian Johnson. If Johnson, a rising junior, joins senior-to-be Brennan in the 2008 draft, that potentially could turn the first round into a WAC attack.

But in terms of talent procurement, the numbers show that the rich are still getting richer in college football. And don't think the next generation of players doesn't notice.

The path to the first round is straighter and narrower than ever. For better or worse, it rarely detours through the smaller schools anymore.