LOUISVILLE, Ky. -- Calvin Borel is famous for hugging the rail, getting the race horses he rides all the way to the inside and almost skimming the paint as he goes.

"It's the shortest way around the racetrack," said the simple man from southern Louisiana.

But Borel's journey from the bush tracks of his Cajun childhood to the winner's circle at Churchill Downs on the first Saturday in May was no rail trip. It was filled with bumps and detours and a lifetime of hard work. It was one long, grinding tour of the glamourless side of racing. 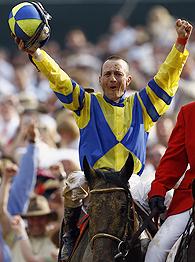 The big races and the best horses were the domain of other jockeys -- guys who reported to the track at midday and waited for the high-priced stakes to roll around. Calvin Borel, winner of zero Triple Crown races before Saturday, was the guy you could count on seeing before dawn every morning. He was the guy riding cheap horses in the morning workouts, then riding a lot of other cheap horses in the afternoon races.

That's the only life Borel has known, until last year. That's when the hardest-working rider in America found himself on the back of the horse of a lifetime. His name is Street Sense, and Borel is the only jockey to have ridden the magnificent 3-year-old colt in eight career races.

Saturday they rode into history together.

Borel authored a classic rail trip to bring Street Sense from 19th after half a mile to third, neatly knifing underneath the field heading into the Churchill Down stretch. The only time he veered Street Sense away from the fence was to pass tiring horses and take dead aim on leader Hard Spun, whereupon he wheeled three wide around the pace setter in the stretch and rolled to a commanding 2¼-length victory in the Kentucky Derby.

Before the race Borel was amazingly confident and serene, blowing kisses and waving to the grandstand. After the race he was simply euphoric.

In the final jumps Borel peeked back over his shoulder, saw that he'd put away Hard Spun and began celebrating. By the time he brought Street Sense back around in front of a roaring grandstand, Borel was lifting his helmet to the crowd with tears in his eyes. This is his home track, but winning its signature race was just a dream until now.

"It's the greatest feeling in the whole world," Borel said.

To understand the feeling, you must understand the man. This might be known as the Sport of Kings, but Calvin Borel is the champion of the common man.

He is 40 years old and owns an eighth-grade education, dropping out after injuring his knee in a bush-track race. His fiancée, Lisa Funk, bristled at a Daily Racing Form story that referred to Calvin as "illiterate," but added that she's helping him with his reading skills.

"We lacked a lot of education," said Calvin's big brother and racing mentor, Cecil. "But we didn't lack no work."

In the Borels' world, it's all about showing up every day and giving an honest effort at a job you love. Calvin is every bit as worldly as Forrest Gump. When asked a question Saturday about winning the Derby in front of "the queen," Borel's face indicated that he had no idea what the reporter was talking about.

"The queen of England, baby," Funk told him.

When you grow up as the son of a sugar-cane farmer in St. Martin Parish, La., how much are you supposed to know (or care) about the queen of England?

Back in those days, school simply got in the way of what Borel had always wanted to do, and had done since he was 8 years old. Ride race horses.

His father, Clovis, was a sugar-cane farmer. When the family wasn't working in the fields, they went to the match races at the bush tracks that have been the cradle of so many great Louisiana jockeys. Calvin was one of them.

The races were a million miles from the dream world of Saturday. Maybe 100 people would gather around a cow pasture and bet on the horses, many of which were ridden by young boys like Borel.

They used to tie chickens to the tails of some horses to make them run faster. At the end of the quarter-horse races, they riders wouldn't even attempt to pull up their mounts; they'd just jump off.

The bush tracks of yore have faded away now, but that was where Borel learned his chops. As a teenager he went to ride for Cecil, who trained a string of 60 horses, at Delta Downs in Vinton, La.

Calvin literally worked day and night, mucking stalls and working horses. During a race one night at Evangeline Downs in Lafayette, La., his mount, Miss Touchdown, clipped heels with another horse and flew into a light post. The horse was OK, but Borel had broken ribs, a punctured lung and had to have his spleen removed. He was in a coma.

When Calvin was healthy enough to come back, Cecil put him back on Miss Touchdown for his first race. The filly won.

"If he was scared," Funk said, "his brother scared him out of it."

Cecil has been Calvin's racing mentor for much of his life. He's 13 years older than Calvin -- a biological fact that earned Calvin the nickname "Boo-Boo."

As in, a mistake.

Ella Borel, the boys' mother, is in a nursing home in Louisiana and is partially paralyzed.

"I hope she saw it," Cecil said, choking up.

Orvis Borel was not around to see it -- he died three years ago of a heart attack. When Cecil Borel, wearing jeans and a denim shirt, got to Calvin after the Derby Saturday, he told him, "This was for dad."

And it was for Cecil a little bit, too.

When Calvin was 15 or 16, he took one of Cecil's horses well wide and lost a race. After the race, Cecil made Calvin walk the horse around the barn. Every time they went around, Cecil moved a barrel further out from the barn and made his brother take the horse around it.

"It's a little bit further than going to the inside," Cecil pointed out, and a riding style was born.

But even with an abundant talent for riding, Borel has never been a big national name. He moved his tack to Churchill Downs and established this as his home base, but he was forever racing in Pat Day's shadow and, recently, had lost mounts to several flavor-of-the-month jockeys.

"It bothered me more than it bothered him," Cecil Borel said.

Instead of being bothered, Calvin Borel just kept showing up for work. Every morning he got up at 5 and rode horses, then took a nap at the track, then rode the races in the afternoons. Just about anybody that asked him to do some work got an enthusiastic "yes, sir" out of Calvin.

The payoff came with Street Sense. Last July, Borel rode the 2-year-old to a second-place finish at Churchill Downs in his first race, won his second at Arlington Park in August. Then trainer Carl Nafzger -- another underrated local guy -- pointed the colt toward six-figure races.

Street Sense ran well to finish third in two races last fall, then erupted for a 10-length victory at Churchill last November in the Breeders' Cup Juvenile. It was a banner day for ham-and-egg riders everywhere when Calvin Borel, of all people, rolled to the biggest win of his career.

Until Saturday. Borel now has bookend career moments at this track, as Street Sense became the first colt in the 23-year history of the Breeders' Cup to win the Juvenile and the Kentucky Derby.

Borel thanked "Mr. Carl" several times after the race for having faith in him. He'd had four previous Derby mounts, but they were all long shots. His best -- and last -- finish was 8th aboard Ten Cents A Shine in 2003.

Since then he's been watching everyone else ride in the Derby. And then he'd show up the next day and ride someone else's horses in the morning.

"Everyone calls it a work ethic, but it's not work to him," Funk said. "It's something he loves.

"During all those times, he never gave up and he never got down. The money, he does not care. If he got $5 for riding that race, he would have ridden it the same way. Calvin would do it for practically nothing. It's his life. It's his desire."

The proof of that was in the 12th race, two after the Kentucky Derby had been run.

Most Derby-winning jockeys take off any mounts they may have after capturing the roses. Borel showed up in the paddock for the 12th, got on the back of 10-1 shot Superb Ravi in an $80,000 claiming race and finished fifth.

That's what guys like Calvin Borel do. Even after the biggest moment of their careers, they go back to work.

But instead of working horses Sunday morning before dawn, he might just sleep in. The common man has earned it.