Tom Boatright has a pet expression he drops on his grandson from time to time: "You still have milk on your breath."

That's his way of reminding 14-year-old Ryan Boatright that he's a youngster with a lot left to learn in life and on the basketball court.

In recruiting, it's all about being first. If you get in on the kid in eighth grade, you're first.

But USC has accelerated the young milk drinker into the straight-whiskey world of college hoops, offering him a scholarship last month. And in direct contradiction to Tom Boatright's wisdom, Ryan accepted with his family's blessing and encouragement.

A few days later, the Aurora, Ill., point guard decided which high school he would attend. East Aurora was the lucky winner.

If offering a scholarship to a 5-foot-9, 135-pound wisp who has never played a high school game strikes you as perverse, premature and preposterous, you must not be a college basketball coach. Recruiters are going after the adolescent crowd like Joe Camel.

Coaches are dangling scholarships like Halloween candy in front of children who are closer to grade school than college. Scottsdale ninth-grader-to-be Matt Carlino got an offer from Arizona State last month -- but Arizona offered him two years ago as a seventh grader. By the way, Lute Olson will be 77 years old when Carlino graduates from high school.

ESPN Scouts Inc.'s list of 130 top prospects from the class of 2010 (rising sophomores) has 10 marked down as already committed to a college. New Kentucky coach Billy Gillispie has oral commitments from two members of that class, and one from the class of '09. Baylor has a couple of commitments for 2010 as well. DeShaun Thomas of Fort Wayne, Ind., considered by some the best member of the class of 2010, already committed and de-committed to Ohio State in the spring.

The negatives attached to super-early commitments are fairly obvious:

• Do the kids actually know what they're doing? Ryan Boatright said USC "has always been my second-favorite school." The favorite is North Carolina, which begs the question: What if Roy Williams calls tomorrow with an offer?

"I don't know," Boatright said. "We'd have to talk about it. I'm staying at USC right now."

Two weeks in, and he's still staying with USC. Sounds like a commitment etched in stone.

• What if they're misevaluated or peak early, never getting much bigger or much better? Several years ago Maryland had to rescind an early offer to the famously overhyped "Jewish Jordan," Tamir Goodman, when it became apparent that his game was better suited for Towson University than the ACC. Former Kentucky coach Tubby Smith offered West Virginian Adam Williams a scholly as a high school sophomore, and the kid went on to prove he had no business at that level over the next few years. He transferred to Marshall after a brief and inglorious stay in Lexington. 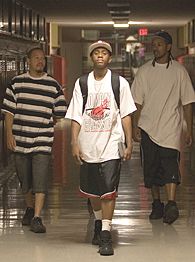 • How much of a mockery can be made of the term "commitment"? Given how rarely young players (or schools) actually follow through on these early commitments, the implied lesson is that keeping your word is for chumps. Youth basketball already has become jaded enough; does it really need more colleges and players entering into verbal compacts that reek of insincerity?

Of course, there is a perceived upside for both sides of adolescent recruiting. Young players gain new stature and notoriety, and that must count for something in a world where some recruiting services rank players as early as the fourth grade. And colleges can create a buzz around their program while (perhaps) locking in on a true rising star.

"In recruiting," said one assistant coach of a top-10 program, "it's all about being first. If you get in on the kid in eighth grade, you're first."

In a field this tenaciously competitive, being first is a powerful incentive. And if you end up first on a kid who doesn't develop, well, it's always easy enough to disengage from a verbal commitment.

"There's a bigger chance of misevaluation, the earlier it is," said Kentucky's Gillispie, who inherited a powerhouse program that was running unusually low on buzz. "There's some question about how guys are going to continue to work and continue to grow. There's some danger involved.

One of the newest venues for that competition is the Fab Frosh All-America Camp, which recently wrapped up in Virginia. It's for players entering their freshman year of high school. As such, they're not yet considered recruitable prospects by the NCAA. So college coaches can work the camps -- and, of course, work the campers.

"We were called and asked if we wanted to send some of our [assistants]," Gillispie said. "We were already booked doing other things, but we definitely would have taken advantage of it because there were a lot of good players there.

"From what I heard, coaches made a lot of great contacts."

Clearly, they weren't just there to help Little Johnny work on his crossover. Honk if you think there was more selling than teaching taking place.

The other hot thing now is for schools to have their own "junior elite" camps, inviting in talented pre-high school players for a chance to learn a few things and fall in love with the host school. Gillispie had a junior elite camp at Texas A&M with kids who ranged from fifth grade to eighth grade.

"Maybe even a fourth grader or two," he said.

Has he ever offered a scholarship to a junior elite camper?

"We probably have, I can't remember," Gillispie said. "No one accepted, I know that."

Gillispie said Kentucky probably will have its first junior elite camp next summer. It was a senior elite camp that led Boatright to his commitment to USC.

Boatright's dad, Mike McAllister, is also his AAU coach on the Illinois Mixers. He asked the coach at a California junior college what camps might help toughen Ryan for high-school ball, and the coach made a call to USC to see whether he could attend the Trojans' elite camp with blue-chip high school players. Invitation in hand, McAllister, Ryan and his mom, Tanesha Boatright, flew out to California last month. 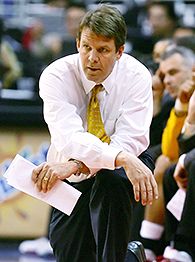 Ryan also plays football and always had loved the Trojans in that sport, and he was a fan of USC signee O.J. Mayo. So he was excited for the visit, and when he was given a tour of campus by a USC assistant coach he was dazzled. It assuredly was more impressive than the middle school campus Boatright was accustomed to seeing.

After playing well throughout the camp, Boatright met with USC head coach Tim Floyd on the final night of camp. Ryan said the meeting took place at the hotel where the campers stayed, the Radisson, across the street from the USC campus. McAllister said the meeting occurred in Floyd's office.

The discrepancy potentially could be significant, since coaches are not allowed to have in-person contact recruits off-campus prior to their senior year of high school. There is some question whether the Radisson -- which serves as a dorm for some USC students and was the player housing for the elite camp -- is considered part of campus. The USC compliance office had no comment on the issue this week. Sports information director Tim Tessalone said the recruitment of Boatright is being reviewed, but there is no evidence of wrongdoing.

Wherever it was, one thing everyone agrees with is this: A scholarship offer was made and accepted.

"My dad asked him if I could verbally commit, and Tim Floyd said yes," Ryan said. "So I did it."

The next day, Ryan and his parents flew home to Illinois. To their shock, they found that news of Ryan's commitment had spread while they were on the plane. When they landed in Chicago, Tanesha's phone was blowing up with messages from family and friends saying they'd read about Ryan committing to USC on the Internet.

"I didn't tell anybody," Tanesha Boatright said. "I'm still confused at this moment how everyone found out."

One educated guess: USC leaked the news to someone -- a fan Web site, a recruiting Web site, a reporter, someone. It's against NCAA rules for schools to publicize verbal commitments, but it might be the most commonly broken rule on the books. Coaches want to get the word out to the world.

And when this particular word got out, it led to backlash. The Boatrights said Floyd told them to expect some instant notoriety and negativity, but they still seem surprised by some of it -- most notably hearing the hosts on ESPN Radio's "Mike & Mike" decrying the commitment of a 14-year-old to a college.

"I promise you, if I had a phone number I would have called in," Tanesha Boatright said. "I thank God that there's positive things on the news about my son. It's not about a murder or something else. Every day you turn on the TV and see an African-American young man being murdered.

"Whether they offered him something at 14, 16 or 18, what is wrong with it? What if it was a scholarship for good grades? Wouldn't that be exciting? My son makes good grades and he is good at sports. Hey, he's a good kid. He's been trained to work hard and study hard."

Ryan' personal trainer is grandpa Tom. And it must be said that the family has a long history with big-time athletics. It isn't like the Boatrights were blindsided by the recruiting game.

"He's got a long line of success in front of him," Tom Boatright said of Ryan. "But he's got to want it. Sometimes it's more the parents who want it for them.

"The day he got home [from USC] he went and lifted. I told him he needs to work even harder, now that he's under the microscope. Two days after that he went and ran 400s.

"Some kids tend to want to soak up the glory. I told him to stay out of the way and keep working."

When Ryan got back from Los Angeles he put a sign on his bedroom wall. It says that for every critic he adds another day to his workout regimen and another plate to the weight bar.

That's admirable determination. But this is still a child with milk on his breath, already thrown into a whiskey world.