LEXINGTON, Ky. -- Andre' Woodson sat in squint-provoking, sweat-inducing sunshine at Commonwealth Stadium earlier this month, happily answering questions at Kentucky's media day. He had a floppy white bucket hat at his feet, but never put it on.

Perhaps because the glare was a welcome change from a career spent in shadow.

Brian Brohm's shadow, to be specific. 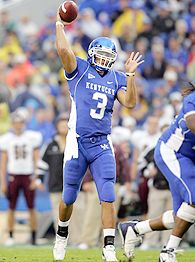 Woodson has been a very good quarterback with the very bad luck to play in the same orbit as the golden boy from Louisville. They went to high school 40 miles apart and now play college ball 75 miles apart, but the distance between the two in accolades and adulation is best measured in light-years.

Brohm was the guy who won three straight state championships, was named Mr. Football and got the USA Today All-America pub. Woodson was the guy whose North Hardin Trojans were always flattened by Brohm's Trinity teams, including a 43-0 smashing when Woodson was a senior and Brohm a junior. (Though Woodson will point out that he and North Hardin were undefeated in hoops against Brohm and Trinity.)

College has been the same song, different verse. Kentucky hasn't beaten Louisville since 2002 -- the year before Woodson arrived on campus in Lexington. Combined margin of defeat in the four games since he became a Wildcat: 82 points. And in the past two, Brohm has started for the winner and Woodson for the loser.

"He's a tremendous athlete," Woodson said of Brohm, exercising his diplomacy skills. "He does a wonderful job directing his offense and has done wonders for his program. I'm just glad to have the opportunity to compete against him for eight, nine years now."

And about that head-to-head record?

"Hopefully this is the year I get him," Woodson said.

In truth, when Louisville visits Kentucky on Sept. 15 it will be the first time in those eight or nine years that Woodson should have a fighting chance. His supporting cast never came close to matching up with Brohm's in high school, and it's been a similar talent mismatch in college.

Now, coming off a buoyant 8-5 season, the Wildcats believe they have their best combination of speed, size and experience in years -- decades, perhaps. Coach Rich Brooks has announced he'll be "extremely disappointed" if Kentucky is not a factor in the SEC race -- something it hasn't been in 30 years.

All that optimism starts with the formerly overshadowed Woodson, proclaimed by his favorite wide receiver, Keenan Burton, to be the best quarterback in the country. He's made a startling rise from oft-paralyzed QB on a losing team, in danger of losing his job, to the top quarterback in the SEC. 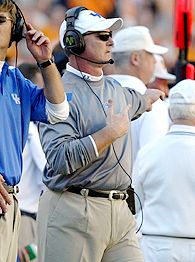 So how did it happen? How did Woodson go from someone in danger of being benched in favor of ultra-athletic Curtis Pulley to reasserting himself? How does a guy with a 3-9 record as a starter become a leader of men on a surprise bowl team? How does a QB with a career 8-7 touchdown-interception ratio throw for 3,515 yards and 31 TDs with just seven picks?

If you want it in a word, try this one: Confidence.

"In previous years I just wasn't that confident," Woodson said.

Much of the credit for improving the maligned QB's outlook goes to his maligned QB coach, Randy Sanders, who might have been the most vilified offensive coordinator in the country during his final years at Tennessee. Sanders was one of the Big Orange fall guys when the Volunteers had a shocking 5-6 season in 2005. After resigning in Knoxville, Sanders relocated 2½ hours up I-75 in Lexington and has helped Woodson fulfill his potential.

"His whole demeanor is different now. He carries himself like a big-time quarterback."

Fact is, the 6-foot-5, 230-pound Woodson has always looked like a big-time quarterback, and thrown like one as well. He made a name for himself in a Nike camp before his senior year of high school, then backed that up with a standout performance at the Elite 11 camp. That's when teams like Penn State, Clemson and Colorado took an intense interest.

But Woodson committed to then-Kentucky coach Guy Morriss, and stuck with the commitment after Morriss left. He was re-recruited by Brooks and then-recruiting coordinator Phillips, and wound up playing in seven games as a backup his redshirt freshman season.

Since then he's been the starter at UK, but more by default than acclamation at first. Woodson was immobile in the pocket and indecisive with the football during a 3-8 sophomore season. 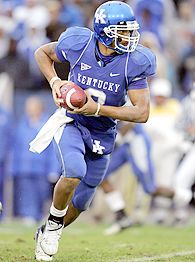 That's why many fans -- and even a few coaches -- favored hotshot recruit Pulley as recently as a year ago. Pulley got most of the reps with the first team in the spring of 2006, but Woodson responded to that challenge with a far more diligent summer than his competition and won back the starting job.

"The progression goes all the way back to that spring, when him and Pulley were going for the spot," receiver Dicky Lyons said. "Andre' showed how much he wanted it. From that time on, I had no doubt he'd have a big year."

Not that '06 started out very big. Woodson and the Wildcats trailed Brohm and Louisville 28-0 before Woodson completed his first pass. They wound up losing 59-28, but along the way Woodson threw touchdown bombs of 73 yards to Burton and 80 yards to Lyons.

The confidence gained from those plays seemed to carry over. Woodson had just one subpar game from that point forward, a 14-for-37 performance in a 49-0 blitzing from LSU. Throwing just seven interceptions in 419 attempts made him an instrumental part of Kentucky's plus-15 turnover margin on the season, which was an instrumental part of the Cats' 8-5 record.

Woodson enters this season with a school-record streak of 162 passes without an interception. He is the current career leader in SEC history for best attempts-to-interceptions ratio. He's thrown 14 in 760 attempts, or one per every 54.3 throws. What his coaches would like to see now is a significant reduction in his sacks. He's taken 66 the past two years, and not all of them can be pinned on poor protection from the offensive line.

Kentucky expects to win a lot of games this year, despite a rugged schedule. Andre' Woodson would love it if one of those wins came over a certain quarterback who has overshadowed him his entire career.