In the rhetorical crossfire that has turned Michigan vs. Harbaugh into the (endless) spat of the summer in college football, the first casualty has been the facts.

Squabbling over whether former Wolverines quarterback Jim Harbaugh should have said what he said about his alma mater's academic standards for football players is to be expected. Attacks on Harbaugh's lifetime status as a "Michigan man" -- they love that phrase in maize-and-blue territory -- have been excessive but are not shocking. The Stanford coach's hurt feelings in response are predictable.

But here's what nobody is discussing: whether Harbaugh spoke the truth when he called out Michigan for admitting "borderline guys" and for steering athletes toward softer majors than the general student population. 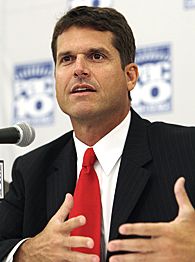 The hard numbers seem to be on Joltin' Jim's side.

All it takes to see that is a scan of the 2007 Michigan media guide. Only 30 players have listed majors, and 19 of them are pursuing degrees in something called "general studies." That's 20 percent of the team, and 63 percent of the players who have declared a major.

And that's not all. The other declared degree programs on the football team are: movement science (three players); sports management and communications (two); economics (two); P.E. (one); psychology (one); English (one); and American culture (one). There appears to be one undeclared player enrolled in the business school and another in the college of engineering.

Only one junior has declared a major, according to the guide (in movement science). In 18 years of covering college athletics, I've never seen virtually an entire junior class without a major.