Editor's note: ESPN.com is asking its experts and SportsNation to predict which conference will be the best in 2007. Follow our bracket-style tournament throughout the week to see which teams our experts picked and to vote in the SportsNation polls.

We don't need Les Miles lipping off to know the truth: The Southeastern Conference is better than the Pacific-10 in football. 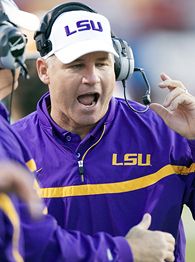 This year and most years.

The LSU coach appealed to his base in early July by taking shots at USC's league. This is what Miles reportedly said at a speaking engagement in New Orleans:

"I would like nothing better than to play USC for the title. I can tell you this: They have a much easier road to travel. They're going to play real knock-down, drag-outs with UCLA and Washington, Cal-Berkeley, Stanford -- some real juggernauts -- and they're going to end up, it would be my guess, in some position so if they win a game or two, that they'll end up in the title [game].

"I would like that path for us. I think the SEC provides much stiffer competition."

When I attended Pac-10 media days later that month, those comments were as popular as Bud Selig at a Bonds family picnic.

"Come check us out," said UCLA defensive end Bruce Davis, sticking up for the league as a whole. "Watch a game or two. Ask teams how they feel after they play us. They think we're out here on surfboards, playing at the beach."

It was Miles who came across dumber than Jeff Spicoli. Impugning UCLA and Cal, for one thing, is simply ignorant. Ignoring the fact that USC has trampled the last four SEC teams it has faced by a combined total of 119 points is worse.

But there is an element of truth to Miles' barbs, no matter how bungled. The SEC is the winner of this cybertournament and is the preeminent conference in college football. Specific to this debate vis-à-vis the Pac-10, it is tougher in the middle and lower tiers.

USC begins the season as the No. 1 team and deserves it, and the Trojans have some decent backup from UCLA, Cal and Oregon. But the overall pecking order tilts toward the SEC. If you were to steal an idea from college basketball and play an SEC/Pac-10 challenge this year, the boys from Dixie would win seven of 10 (matching their 10 best against the full membership from the West Coast).