From the desperately tight spot he now occupies, you wonder whether Michael Vick can grasp how far he's plummeted. How much he's lost. How much he's given away. 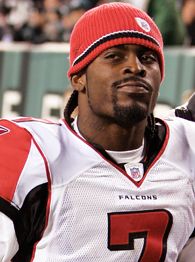 Yeah, a lot of sports stars have done worse things. (If there are two things we've learned this summer, it's that Americans adore pets and animal activists are phenomenally vocal.) But few fallen sports stars had so much to forfeit.

This was to be his time. His era.

On the night of Jan. 4, 2000, fresh into the new millennium, Florida State beat Virginia Tech for the national title. And in defeat, Michael Vick took over football in the 21st century.

At least that's the way it seemed, watching it unfold in person in the Louisiana Superdome. The Hokies' redshirt freshman was a revelation -- the fastest quarterback anyone had ever seen, blowing away an ultra-fleet defense and possessing a preposterous arm. He threw for 225 yards and a touchdown and ran for 97 yards and another score, but the impact went beyond his numbers. Seminoles coach Bobby Bowden spoke with undisguised wonder about what Vick did to his defense.

He was sui generis. He looked like a new evolution of the quarterback position.

Fifteen months later he was the first player picked in the NFL draft, going to a city where he had the chance to play god: Atlanta, where they were starving for a marquee football star and an African-American athletic hero. In 2002 he led the Falcons to a playoff upset win in Green Bay, and in 2004 he led them to the NFC Championship Game. That winter he signed the richest contract in football history, for $130 million over 10 years.

He'd pulled himself out of a Tidewater ghetto and become a bona fide American success story. The possibilities seemed limitless. The sporting world was his.

Today, with a pile of dead dogs and criminal charges he has agreed to plead guilty to, Michael Vick has no ownership of the sporting world. Worse, he has no ownership of his future, having sold that and his reputation down the river in exchange for some low-class bloodsport thrills. He's all but helpless.

His immediate future is now dependent upon a sentence and the judgment of a commissioner with a proclivity for sledgehammer suspensions. If Vick is in an NFL uniform before July 2008, it would be a stunning upset -- and even that potential comeback date is pure conjecture.

But if he is in an NFL uniform in July 2008, don't expect it to be red and black. His long-term future will depend on the desperation level of some other franchise, away from the city that has adored him for six years.

The Atlanta Falcons have many self-inflicted reasons for their relatively inglorious history, but this episode veers more toward bad luck than bad management.

So the Falcons went and got a fourth head coach to try to make him into the millennial superstar he seemed destined to be. They paid quarterback savant Bobby Petrino (who follows Dan Reeves, interim Wade Phillips and Jim Mora) a jillion bucks to come in and tailor an offense around Vick. They committed so strongly to Vick, they sent their talented backup, Matt Schaub, to Houston.

And then it all blew up.

We started hearing about the black-painted buildings in rural Virginia where dogs dueled to the death, or were killed by their owners after losing. And the more we heard, the worse it got, as fans holding out hope for a good explanation became sickened by the developing story. My 10-year-old son's No. 7 Falcons jersey stopped coming out of the drawer months ago, and I'd imagine the reaction has been similar nationwide.

Kids love athletes. But they love animals, too. There are plenty of other quarterbacks to root for who aren't facing the specter of prison time for dogfighting.

Supporters dwindling, teammates distancing, friends rolling for the feds, ownership seemingly ready to move on without him, league seemingly ready to exile him, justice system ready to incarcerate him -- it's been a stunning study in self-sabotage.

Michael Vick will have a second athletic act -- eventually, somewhere, with somebody. But it will never be the same as the first act. Not with all the promise and potential and expectation left unfulfilled.

His time has come and is now going, going