KNOXVILLE, Tenn. -- 'And One' Saturday is in the books, and it had nothing to do with the shoe company or a free throw after a made basket. It had to do with this:

And here, from rollicking Rocky Top, came the trifecta Saturday night. Good things and celebrity deaths allegedly come in threes, and on this day, so did the shocking losses for undefeated teams.

'And oh' is out the window.

By tipoff in Thompson-Boling Arena, the Gators had quite unexpectedly become the Team of the Moment in college basketball. The last unbeaten, after the Panthers and then the Blue Devils had been stunned earlier in the day. The Gators were poised to replace Duke at the top of the rankings, if they simply could dispatch a Tennessee Volunteers squad riding a two-game losing streak. 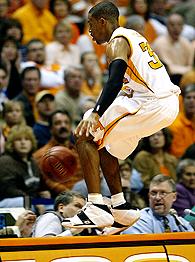 Bruce Pearl began the night by walking his Volunteers down through the student section, at the suggestion of senior point guard C.J. Watson. Pearl ended it by watching that student section spill onto the floor and engulf his gritty Vols after an 80-76 upset of the Gators.

Undersized forward Dane Bradshaw, who scored the winning layup off a brilliant make-good play by undersized shooting guard Chris Lofton, came out of the hysterical group grope with a long black streak down the front of his white uniform.

"I hugged one of the painted guys," Bradshaw admitted. "Hopefully it'll come out."

If not, they can pay for a new one with the gate receipts from the largest crowd for a Tennessee men's game in 15 years (24,011). They've fallen in love with this 12-3 team that embodies everything the football Vols did not last fall: heart, grit, unity and dramatic overachievement.

When Watson launched himself over press row chasing a loose ball in the first half, the response was a standing ovation. The attitude is fully appreciated, even at a school that has always loved the pointed ball most.

UT athletic historian Haywood Harris, who has seemingly been around Knoxville since Gen. Robert R. Neyland was a corporal, was asked the last time Big Orange men's basketball caused such a collective tizzy.

Those were the days of the Ernie and Bernie Show, when Ernie Grunfeld and Bernard King were lighting up the SEC. Thirty years is a long time in a place that takes it sports as seriously as Tennessee does.

Fame has been fleeting during the past three decades. After athletic director Doug Dickey fired Don DeVoe in 1989, he embarked on a string of unsuccessful hires: Wade Houston, Kevin O'Neill, Jerry Green, Buzz Peterson. Finally, Dickey's replacement, Mike Hamilton, stepped in last spring and got it right by hiring Pearl.

"Last spring, when I was sitting with Bruce in Chicago [interviewing him for this job], I told him, 'This place is ready to explode with the right coach,'" Hamilton said. "We just haven't given our fans too much to be excited about. We can win championships here. We do it in every other sport."

Pearl has certainly brought championship-level charisma and community relations to this job. He won't just shake the hands and kiss the babies. He'll change the babies and burp them.

"He's been somewhat of an evangelist, a circuit-riding preacher," Hamilton said. "He's connected with the fan base."

But there are a lot of coaches who can win the press conferences and pep rallies, then fall short at game time. Pearl is not one of those guys, having gotten this team off to an 8-0 start that included a rout of Texas in Austin. With two wins over top-five teams, it would take a major collapse for Tennessee not to make the NCAA Tournament field; it would be the team's first trip there since 2001.

All this began when Pearl connected with his most important constituency, the players. He sold them on a fast, free-wheeling and fearless style of play, convinced them he cared about them -- then kicked their rears during the offseason.

Pearl dismissed one player for disciplinary reasons and suspended another, and he's stayed on their necks about acting right.

"We run till we puke when someone misses a class," he said.

The Vols ran enough during offseason conditioning that they don't puke easily these days. This is a team in phenomenal shape, possessing a physical and mental toughness that was infamously lacking under Peterson.

The book on the Vols in previous years was that they'd crack against a rugged opponent or if put in a tight spot. That book is now out of print.

"I think we've got some tough kids," Hamilton said. "Maybe they weren't showing it. Through his conditioning and offseason work, he's made them tougher."

That toughness made the difference against Florida, because it sure wasn't talent.

Tennessee got 29 points from its bench, including a fierce double-double by forward Andre Patterson; three points and three rebounds from freshman center Ryan Childress (his first SEC points); and four points and some steady play from sophomore point guard Jordan Howell (the foul shot he hit with 90 seconds left for a two-point lead was the first free-throw attempt of his college career).

And the Vols got 29 points, six rebounds, three assists and three steals from spectacular sophomore Chris Lofton. The fact that the Kentucky Mr. Basketball of 2004 went unwanted by both Kentucky and Louisville isn't just a basketball crime; it's a felony. He's been nothing short of brilliant since arriving in Knoxville, and he was brilliant last night.

Lofton knocked down five 3s, but showed that his game is far more than stand-still shooting. He's an all-around fine basketball player.

Lofton made the game-winning play on the defensive end. With the game tied and the clock nearing 30 seconds left, he launched a long and unwise 3-pointer that missed. Corey Brewer -- who was spectacular for the Gators despite spraining an ankle in the first half -- grabbed the rebound and sprinted downcourt.

It looked like an easy Florida hoop. The multitalented Brewer was bearing down on Lofton, the only Vol back, with Noah behind Lofton near the hoop.

But Lofton feinted toward Brewer, forcing a pass toward Noah. Lofton leaped in the air and stole it, took a quick dribble and fired a 40-foot pass to Bradshaw for a cherry-picking layup.

"I got a little tight," Bradshaw said, but he kissed the ball in without incident and the building erupted.

"Thanks for getting me on 'SportsCenter,'" Bradshaw told Lofton.

Tennessee still had to weather a final 3-point attempt by Florida's Lee Humphrey -- the leading three-ball shooter in the SEC -- but it fell short. Lofton grabbed the rebound, got fouled and made two with 6 seconds left.

All that remained was the court storming -- one of many on 'And One' Saturday in college basketball.