It's been a week of celebration, regrets and reflections after the passing of the legendary Negro League star, Buck O'Neil on Friday.

Those who knew him or knew of him are celebrating all he did to open doors for African-American athletes through his own brilliant career as a player and coach, and as an ambassador of the game. The regrets grow from the many things he was not able to do because his country was not ready for full integration, and from a special committee's failure to vote him into the Baseball Hall of Fame this February in his 94th year. Now there will be no 95th year. Posthumous induction into Cooperstown will be nice; but his in-person acceptance would have been right. 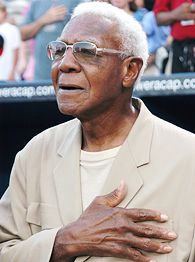 And the reflections focus on the barriers O'Neil faced in a segregated America that lingered even after the laws changed, and how sport, in many ways, has led the nation in destroying the barricades of hate.

Those celebrations, regrets and reflections will all be on display this weekend in Kansas City. Thousands lined up to view O'Neil's body on Friday, and a memorial service was scheduled for Saturday.

Segregation in sports began to crumble even before the Supreme Court's landmark Brown v. Board of Education decision prohibited public school segregation in 1954. Jackie Robinson, for example, broke the color barrier in major league baseball in 1947.

Looking back, it seems like little more than the luck of the draw that O'Neil wasn't among the Negro Leaguers signed to play in the majors. I know Robinson was more or less handpicked by Branch Rickey to be the first; but O'Neil, like Jackie, was a positive person whose life had already shown that he could endure the sort of hardships that Robinson experienced. As Robinson did at UCLA, Buck attended college (Edward Waters College in Jacksonville, Fla.). His career was disrupted by a stint in the Navy from 1943-45, just as Robinson's was by the Army. After World War II, O'Neil came back to the Kansas City Monarchs and led the league in hitting in 1946 with a .353 average, followed by his best-ever .358 average in 1947.

Everybody is familiar with Robinson's story. Fewer, though, know about the integration process in the NBA and NFL. In 1950, a week before Earl Lloyd and Chuck Cooper became the first African-Americans drafted by the NBA, the New York Knicks signed Nat "Sweetwater" Clifton from the Harlem Globetrotters. All three took the courts in October of 1950. I was five years old that year, and recall to this day the fear I felt when I heard people call my dad, who coached the Knicks then, "nigger-lover" after he signed Clifton.

In 1946, Bill Willis and Marion Motley joined the Cleveland Browns of the All-American Football Conference, and Kenny Washington and Woody Strode played for the Los Angeles Rams of the National Football League, becoming the first African-Americans in major professional football since 1933.

The presence of African-Americans breaking down barriers on ball fields around the country helped overcome similar obstacles in social institutions. The impact of the Brown v. Board of Education decision very likely was hastened by these earlier breakthroughs in pro sports. 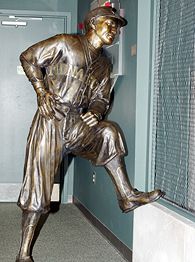 The atmosphere in sports was also changing on college campuses as African-Americans began to have a very visible presence on the fields and in the arenas. Without that progress, the implementation of integration in the South as well as elsewhere would have been even slower. It was certainly a turning point in the history of integration, especially in the South, when Texas Western, featuring an all-black starting five, beat the all-white, still-segregated University of Kentucky team for the 1966 NCAA basketball championship.

In many cases, the positive changes in athletics spread to the college campuses because athletes interact not only with each other but also with other students. In that setting, they can display the concept of teamwork so critical to success in their chosen sport.

In a team huddle, we shed any concern about the color of a teammate's skin or the faith he or she follows. We don't care if our teammates are gay or straight, because we know that if we are going to succeed as a team, we all have to play as one. When our student-athletes preach that thinking to other students, then the concept of teamwork can impact an entire campus. Furthermore, student-athletes who become leaders through effective community service programs help break down stereotypes and negative perceptions of athletes.

That's the approach to sports, and to life, that O'Neil took.

He became the player/manager of the Monarchs in 1948, and led them to the Negro League Championships in 1953 and 1955, leaving to become a scout for the Chicago Cubs in 1956. In 1962, the Cubs made O'Neil the first African-American coach in major league baseball, which put him way ahead of the game.

The 1960s and '70s saw the passage of various civil rights legislation and the introduction of affirmative action, which had a big impact on sports participation and eventually helped lead people of color to positions as coaches and athletic directors. In the decades following O'Neil's promotion to Cubs bench coach, we began to see some opportunities for African-American men's basketball coaches such as John Thompson and Nolan Richardson, who led Georgetown and Arkansas, respectively, to national championships.

However, in college football, the progress came more slowly. Willie Jeffries became the first Division I-A African-American head football coach in 1981 at Wichita State; and nearly three decades later, there have been only 20 other African-Americans named head coach of a Division I-A football program.

Integrated sports have led to many benefits -- first and foremost, sports simply bring people together. Sports have bridged cultural gaps and built community by modeling the concept of teamwork. When we play together as a team, we see that we have common ground, even as we see that we also have differences that can make us better. There are innumerable aspects of sport that can lead to better character. Many of these traits can be found in other areas of our lives, too, but the bringing together of people across racial boundaries is a very important part of the world of sport.

Ironically, white America didn't really discover O'Neil until he was featured in Ken Burns' PBS documentary on baseball in 1994, when he was 82 years old. For the next 12 years, he was featured in dozens of national print and broadcast interviews. Once he was in that national limelight, he brought people together across the color lines.

O'Neil, in spite of the fact that he missed so many opportunities for himself, often told friends, "I was right on time." He would say he had no regrets, even after he wasn't selected for the Hall of Fame this year.

As quoted in the Kansas City Star, he addressed nearly 200 friends who had gathered to celebrate the induction that didn't happen. "God's been good to me. They didn't think Buck was good enough to be in the Hall of Fame. That's the way they thought about it and that's the way it is, so we're going to live with that. Now, if I'm a Hall of Famer for you, that's all right with me. Just keep loving old Buck. Don't weep for Buck. No, man, be happy, be thankful."

Perhaps O'Neil's graciousness was borne of the wisdom and perspective that comes from knowing that his sacrifices made so much possible for so many others. While he never experienced his own induction into the Baseball Hall of Fame, the thank-you letters, calls and comments he received over the decades all count on the selection ballot for the Human Hall of Fame.

Richard E. Lapchick is the Chair of the DeVos Sport Business Management Graduate Program in the College of Business Administration at the University of Central Florida. The author of 12 books, Lapchick also directs UCF's Institute for Diversity and Ethics in Sport, is the author of the annual Racial and Gender Report Card, and is the Director of the National Consortium for Academics and Sport. He has joined ESPN.com as a regular commentator on issues of diversity in sport.