CHICAGO -- Joe Paterno has been up since 4:30 a.m., which explains why a Penn State PR official places a cup of coffee in front of the head coach's table placard minutes before JoePa arrives for his two-hour interview session. Already his table is SRO, with reporters lined one- and two-deep for his annual appearance at the Big Ten Football Media Days.

This is a pivotal, decisive year for Paterno and a Penn State program that has wobbled like a dessert serving of Jell-O. The Nittany Lions have had exactly one winning season in their last five. They haven't been to a bowl game since 2002 and haven't won a bowl game since 1999. NFL teams thought so much of Paterno's roster that not one Penn State player was selected in the April draft. 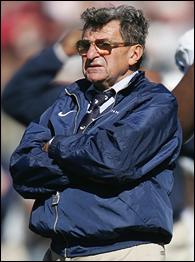 The whole concept of a Paterno program sucking air on such a regular basis is mind-boggling, especially given the man's record: 343 victories, two national championships and a reputation and legacy as polished as those wonderfully bland white helmets they wear. But not even an actual living legend -- and you can count these guys on the tines of a dinner fork -- is immune to the freezer-burn business of college football.

This is Paterno's 40th season as Penn State's head coach. His Mr. Magoo glass frames are older than some buildings on the University Park campus. He's been there so long that archeology grad students want to do a dig at Beaver Stadium.

And here's what the longevity now means: bupkis ... zilch ... na-Pa. More often than ever, Paterno is now judged not by his body of work, but by two of the cruelest letters in the alphabet: W and L.

So he sits at a table in the ballroom of a downtown Chicago hotel, surrounded by reporters who ask, in a dozen different and gentle ways, why he persists. Why continue coaching a game that his critics say passed him by in the speed lane several years ago? Why not send those JoePa glasses, as thick as Oval Office windows, and the clambake game-day pants to the Smithsonian and be done with it? Retire, for godssakes. Whip out the AARP card for those senior discounts and enjoy life.

Yes, well, Paterno isn't quite ready for the early bird special at Morrison's just yet. He has a program to revive and a legacy that needs another wax-and-buff job. Or as he tells his team, "I'm looking for a couple of players to carry me off the field."

Paterno wants to win another national championship. He says this with a straight face, despite having won a grand total of seven games in the last two years, 26 in the last five. But this is quintessential Paterno: stubborn, proud, defiant. A calendar means nothing to him. Age is a number, nothing more.

"I can do things physically that some of the kids on my team can't do," he says. "If I went like this [he stands and, with heels flush against the floor, begins touching the carpet with his hand], I bet you there aren't six of you that can do what I can do. I can do that 50 times."

I sneak over to the next table, where Penn State quarterback Michael Robinson is sitting.

"You ever see Joe do that thing where he touches the floor?" I say.

Robinson rolls his eyes. "Yeah," he says, "but we're like, 'Coach, you're bending your knees. Seriously, Coach.' I mean, he's 140 years old. A lot of guys that old can't touch the floor, even with their knees bent. There's a fountain of youth near his house and I hope I find it."

Robinson has heard the criticism of his coach. Everyone, including Paterno, has heard it. You need your ear canals removed not to hear the checklist of complaints.

He's too old. Too loyal. Too uncool.

Of course, Paterno looks like he wants to give you a forearm shiver when you mention the O-word. "You know how many coaches used that against me who are now looking for jobs?" says Paterno, referring to opposing recruiters who mentioned JoePa's age early and often. "A lot of them are out."

As for being too loyal, Paterno offers no apologies. After all, since when did loyalty become a negative? One of his proudest moments was during the offseason, when not one of his assistants ditched him. "And three of them had chances to go to other jobs," Paterno says. "Good jobs, too."

And, yes, Paterno is famously uncool. He has known Nike founder and chairman Phil Knight for years, and every so often Knight will dispatch a uniform designer to Happy Valley in hopes of convincing Paterno to update those white and blue unis.

But every year the uniforms remain the same, much like Paterno himself.

But all things aren't equal. His wife Sue has had some medical problems. Some of Paterno's old friends are turning up on the obituary pages. He doesn't spend as much time with family as he'd like.

And yet, he can't walk away. Not yet. He read recently about Dallas Cowboys coach Bill Parcells, who had said he wanted to get in shape so, in Paterno's words, "he'd be able to chew their asses out." This is how coaches think. They live for the practice field, for the game, for the moments a sideline camera and Holly Rowe can't see.

"Coaching's not a mystery," says Paterno.

Neither is Paterno. He isn't going anywhere, especially into retirement.

How do I know? He didn't touch the cup of coffee.