98) Recruiting rankings. NFL teams spend hundreds of thousands (millions?) of dollars on scouting, and they still draft Ryan Leaf second overall in 1998. If they can screw up, just think of the evaluation mistakes high school recruiting gurus can make.

97) NCAA Tournament seedings. A No. 12 seed has reached the Sweet 16 in five of the last seven years. 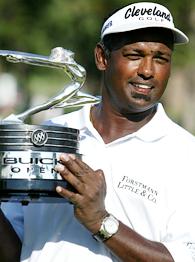 95) Six-minute renditions of "The Star-Spangled Banner.''

90) Athletes who speak in the third person.

89) The Iowa Cubs in the Pacific Coast League.

88) Jerry Rice playing for his fourth team in six years.

86) Two-question halftime interviews with coaches. Featuring the old reliable, "What did you say to your team at halftime?''

84) Any boom mike positioned too close to Tiger Woods after a bad shot.

83) Any review system that forces NFL coaches to fling red handkerchiefs onto the field. Can you imagine what Da Coach would have done with that thing?

80) The way sportswriters are portrayed in movies and TV shows. We really don't wear Munsingwear shirts, smoke cheap cigars, and say stupid things. Check that. I once knew a sportswriter who asked, "Weren't there a lot of black catchers in the Negro Leagues?''

79) The Green Bay Packers and Chicago Bears play outdoors, but not the Detroit Lions and Minnesota Vikings.

75) NBA refs who swallow their whistles when they see traveling.

72) Jeff Gordon and the Seventh-Inning Stretch. Wrigley Stadium? This is what too many G-forces can do.

70) Having to pay for exhibition games as part of your NFL season ticket package.

56) Todd Bertuzzi in the NHL. When Steve Moore can play again, then so can Bertuzzi.

52) NCAA transfer rules. A college football coach can ditch his school without penalty, but a college player has to sit out a year?

51) Little League dads. They should be seen, but not heard.

49) Any rule that allows someone to call a timeout while falling out of bounds.

44) Not being able to keep footballs kicked into the stands. Is it our fault the thing cleared the goal-post netting?

43) The visiting clubhouses at Fenway Park and Wrigley. Tinier than the room where Britney Spears stores her Oscars.

38) Only three African-American head coaches in Division I-A football. Incredibly enough, down from a year ago.

34) Interleague play. Hey, everybody, it's the Royals vs. the Rockies!

29) Alternate jerseys. Does the world really need a third version of the Baltimore Ravens' design?

25) Not being able to take a free drop when your ball rolls into a divot.

24) The Washington Redskins. Has Daniel Snyder ever spoken to an actual American Indian about that nickname?

20) NFL quarterback ratings. How can 158.3 be the best rating in anything?

18) The two months it takes to play a best-of-seven series in the NBA playoffs.

17) Steve Williams. The caddy photographers would most like to smack with their zoom lenses.

16) "We Are The Champions'' song. Even Freddie Mercury would be tired of hearing it.

15) Donald Sterling. The Bill Wirtz of the NBA.

11) Boxing's heavyweight division. Ali could still beat half these guys.

10) Tyrone Willingham gets fired, but Gary Barnett and his Teflon whistle don't?

9) The 487-page NCAA rules manual. Harder to understand than Schwarzenegger doing Shakespeare in the park.

7) The Indy 500. Remember when it really mattered?

5) The ESPN bottom-of-the-TV screen scoreboard. It gives way to a commercial a nanosecond before the score you've been waiting on is supposed to appear.

2) Fans who think a paid ticket gives them the right to open the payload door and drop whatever verbal bombshells they choose -- no matter how many little kids are sitting in front of them.