Yeah, he cried. Cried like a newborn -- not that you could blame him. Minutes earlier, as the full weight of USC's logic-defying 34-31 victory against Notre Dame became reality, Leinart had plopped hard on the metal bench behind the Trojans sideline and buried his head in his hands. His eye-black took a beating as the emotions of -- well, let's just go ahead and say it -- one of the greatest games ever played at Notre Dame Stadium (or anywhere, for that matter), took hold of the usually unflappable USC quarterback. 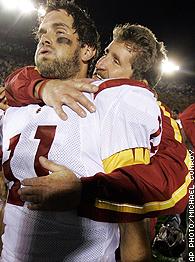 "Just tears of joy," said Leinart, as a teammate helped pull his jersey and shoulder pads over his head. "It was more like, 'Oh, my god, what just happened?' "

What did happen? How is USC still No. 1 and undefeated? How did the Trojans overcome themselves and Notre Dame? And is there a wing in the nearby College Football Hall of Fame for the game tape of this one?

Wow. Even the goalposts had goose bumps. Seven seconds left. USC with the ball inside the Notre Dame 1-yard line. No timeouts remaining for the Trojans. Star running back Reggie Bush cramping up. The geeked-up sellout crowd near sideline's edge, just waiting to storm the field.

And then Leinart, the Heisman winner, takes the snap, lurches forward, is stopped, spins (Spins? Maybe that ballroom dancing class is paying off.), and, with a push from the 200-pound Bush, crosses the goal line.

Delirium on the USC sideline and in the Trojans seating section. Silence throughout the rest of the stadium, as if the hearts and vocal cords of Notre Dame's fans had been removed. What moments before was a 31-28 Fighting Irish lead is now another USC comeback win.

But not everyone believed it would happen, including Heisman co-frontrunner Bush.

"For the first time I think in my career here, I was unsure," said Bush, who ran for 160 yards and a career-high three rushing touchdowns. "I regret that so much because I know the type of teammates I have. They never give up."

Bush cried at game's end. And when it came time to speak with reporters, Bush pleaded with a USC sports information department official to find him a chair. He was exhausted. A battered stool, its plastic seat almost completely missing from the frame, was placed in front of Bush. He happily sat on it and chugged Gatorade.

"Just the feeling of winning, here at Notre Dame, so much history here ... it just overcame me, man," said Bush, who chose the Trojans over the Irish during the recruiting wars. "This is what we play football for. These are the type of games we live for, die for."

USC's dream of an unprecedented national championship three-peat almost took it in the compression shorts Saturday. For the third time this season, the Trojans trailed at halftime. And for the first time, they trailed with only minutes ... seconds left to play.

In the past, USC has depended on its superior talent, its coaching, its USC-ness to separate itself in the second half from Oregon, Arizona State and Arizona. But Notre Dame was, in many ways Saturday, USC's equal and, at times, its superior. This time the Trojans couldn't simply wink-wink their way to a comeback. The Irish were too good, the home crowd too energized, first-year ND coach Charlie Weis too nimble and clever.

This game, even more than the national title wins against Michigan and Oklahoma, is what will help define Pete Carroll's legacy at USC. It is the game people will forever remember. Bush himself said it was the biggest win of his Trojans career -- and he owns two championship rings.

USC won this game because of its arrogance and in spite of it. It takes arrogance to go for it on fourth-and-1 from your own 19 with 13:27 left in the third quarter, and Notre Dame already up 21-14.

But they made it.

It takes arrogance to do what Bush did during that same drive: bolting through the line, sprinting into the open field, grandly gesturing with one hand as he neared the end zone, and then slowing down just as he crossed the goal line. That's when Notre Dame safety Tom Zbikowski, who never gave up on the play, popped Bush with a hit the USC tailback so richly deserved.

"That was my fault," said a contrite Bush. "That was my way of showing off. Completely bad leadership on my behalf."

And it takes arrogance to not even consider kicking a game-tying field goal in those final seconds of the fourth quarter.

But it worked, and for that, USC deserves as much credit as its charter plane can carry back to Los Angeles.

It isn't an accident that Carroll wears a wristband that reads, "Compete." USC competes from start to finish, but with lapses in between.

The Trojans were out pep-rallied (40,000-plus, with an appearance by ND legend Joe Montana), out T-shirted (my favorite: "New Coach. New Pope. New Era. Same Jesus") and, at times, outplayed. But they persevered.

USC wide receiver Dwayne Jarrett played, even though he could barely see out of his right eye (someone poked it earlier in the game). Cornerback John Walker, all 5-10 of him, did what he could against Notre Dame's tall receivers. He got beat, but never backed down. And Leinart, who looked ordinary during long stretches of the game, delivered pinpoint passes and clutch, unlikely runs when it mattered most.

Afterward, there were more hugs than usual in the USC locker room. The Trojans knew they had done something memorable.

So did Notre Dame's Weis. At exactly 7:15 p.m., Weis took several steps into the Trojans locker room and offered his congratulations.

"That was a hard-fought [bleeping] battle," said Weis, as the USC players shushed each other to hear the Notre Dame coach. "I just want to wish you good luck the rest of the way. I hope you win out."

They will. To do anything less would cheapen a game to remember.