Get the new James Bond to configure the C-4. Hire the Navy SEALS to attach the detonator. I don't care if you have to swipe Count Dooku's lightsaber to do the deed, but it's time for the Bowl Championship Series to dictate its last will and testament. 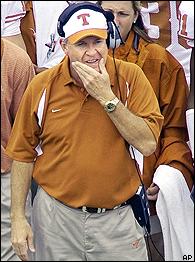 The BCS means well. All it really wants to do is arrange a No. 1 vs. No. 2 national championship game. But how can you trust a "system" that does more makeovers than the Queer Eye guys? Hardly a year goes by that the BCS doesn't go under the knife for a nip and tuck.

I'd rather clean Bevo's stall after the big lug scarfs a 10-pack of White Castle Slyders than endure another annual controversy, another cluster of inevitable BCS fixes. The BCS doesn't set the postseason agenda, it reacts to it. Every season a flaw is exposed, followed months later by another bandage applied by the BCS administrators.

For example, the new Harris Poll has been a huge success, especially if you don't count the three weeks when not all the voters voted (one member has since been dumped). And how can you not respect a poll where one of the voting members is a territory manager for Blue Bell Creameries? Nothing says college football like Moo-llenium Crunch ice cream.

The USA Today coaches poll has its own issues, beginning with its credibility. I'll bet you Frank Beamer's annuity fund that not all 62 members of that poll fill out their own ballots. If they do, at least a few of them depend on the advice of a sports information director or director of football operations. And let's not even pretend that coaches don't occasionally vote in ways that will best serve their program's interests.

The BCS needs to swim with the fishes. It needs to visit Jimmy Hoffa. Problem is, the university presidents refuse to hand the BCS a pair of cement shoes. Instead, we're apparently stuck with this living, breathing nightmare through the 2009 season.

A playoff, which just happens to determine 88 championships in other NCAA sports -- including non-Division-IA football -- is a presidential no-no for now. You've heard the usual reasons: It would harm the bowls, require too many games, interfere with exam schedules.

Meanwhile, these same presidents OK a 12th regular-season game and lengthen the postseason (next season's BCS Championship will be played Jan. 8, 2007).

So how about the next best thing? How about the only thing that makes sense, short of a 16-, eight- or even four-team playoff?

How about the first-ever BCS Selection Committee?

This isn't a new idea. Big East commissioner Mike Tranghese, a former BCS coordinator, is a selection committee advocate. So is Mountain West commissioner Craig Thompson, who, like Tranghese, served on the NCAA Men's Basketball Selection Committee in years past. The concept makes sense on so many levels, which is probably why the BCS has ignored it.

"Is there a process that has more credibility than the men's basketball committee?" Thompson asks.

Nope. You can argue with some of the committee's past decisions, but you can't argue with the integrity of the process to reach those decisions. That's what the BCS doesn't understand. It has a credibility problem, made more obvious by the annual repairs.

"I think it's applicable," said a member of the present basketball committee, on condition of anonymity. "Look at all the factors that our committee uses, and I think they're all relevant [to football]  I think it could be just as valid as using the existing group of people we're using."

When Thompson was a member of the hoops committee, he spent between 90 minutes to two hours a night during much of the season watching games and studying material on the 80 or so teams most likely to be considered for March Madness. Do you think the Harris voters or the coaches are making the same sort of time commitment to football?
Former SEC commissioner Roy Kramer would be on my committee. So would former Northwestern athletic director Rick Taylor, soon-to-be-former Stanford AD Ted Leland, and former ACC commissioner, Notre Dame AD and NCAA president Gene Corrigan. I'd also contact former Georgia coach and AD Vince Dooley, former Ole Miss coach David Cutcliffe, former Miami coach Jimmy Johnson, former USC and UNLV coach John Robinson, former North Carolina State coach Dick Sheridan and former NFL star Kellen Winslow.

I'd keep the polls, but use them the same way the basketball committee does: as a tool, but not as two-thirds of the selection equation, as the BCS now does. I'd use the computer rankings as sort of a football RPI. I'd insist on 25 committee members as opposed to the NCAA's 10 -- fewer complaints of favoritism that way. I'd have my committee chairman conduct a post-selection TV and teleconference, explaining exactly why the committee did what it did.

My committee doesn't solve the dilemma of three or more undefeated teams. Only a playoff can do that. But I'm guessing Auburn's Tommy Tuberville, whose unbeaten Tigers were left out of the 2004 BCS title mix, could live with the decision of a committee composed of athletics professionals easier than he could the verdict from the Blue Bell guy, six computer wizards and 62 coaches who might or might not actually have seen Auburn play. The same goes for USC's Pete Carroll in 2003 and Oregon's Mike Bellotti in 2001.

My sympathies to BCS coordinator (and Big 12 commissioner) Kevin Weiberg if USC, Texas, Virginia Tech and Alabama finish the regular season without a loss. Not even the new Bond can save him then.