MILWAUKEE -- Thanks for nothing, Michael Redd. Thanks for sticking it to every son with a father. Thanks for raising the gift bar so high we'll need four Sergei Bubkas and a Huey to get over it.

You couldn't do what the rest of us did, could you? Maybe swing by the grocery store to get a Hallmark card. Pick out a nice tie at Target. Kid the old man about his birthday cake becoming a fire hazard. These are the old reliables.

No, you had to make us all look bad, including the rest of your multimillionaire peers in the NBA. At least they have the decency of being predictable. They buy their pops one of the five crown jewels of big-ticket items: car, boat, vacation, fractional jet ownership, house. Didn't you get the e-mail?

You bought your dad a house, all right, but it was a house of worship -- the newly named Philadelphia Deliverance Church of Christ in your hometown of Columbus, Ohio.

Great. Now the rest of us look like total slackers.

"Every now and then you catch yourself drying tears," says the longtime pastor.

Oh, sure, rub it in. Cue the string music while you're at it.

Turns out father and son have been talking about dreams since Michael was a senior at West High School in Columbus, the same school where James also earned prep All-American hoops honors. James Redd was recruited by Bob Knight, Digger Phelps, George Raveling, even a bald-headed crazy named Dick Vitale. He still has the letters.

But James' mom was ill at the time, so he decided to stay home and attend Capital University. No regrets. He met his wife, Haji, there. "No her, no Michael Redd," he says. "It's all about timing."

Father taught son how to play and how to pray. Michael was 2 when his old man set up a pink trash can in the hallway and taught him to shoot a Wiffle ball or rolled up sock into the makeshift basket. Michael was 14 when his old man knocked him down on the court during a one-on-one game. James always believed in the business end of an elbow or hip.

But Michael got up. And beat him for the first time.

"He played me like a grown man," says Michael. "And that was the right move, too. He tested my heart."

James worked at the Pepsi Cola plant Monday through Friday, and at church on Sunday. The place wasn't exactly the National Cathedral. The family attended a storefront church in a strip mall, and later James' congregation moved to the basement of another area church. One day, said James, they'd trade up to something above ground.

Michael had a better idea.

"Dad," he said before his senior year at West, "if I get to the NBA I'm getting you and mom a new house and a new church."

James knew Michael had talent, but the NBA and a church purchase?

Redd led the Big Ten in scoring as an Ohio State freshman. But he was still on the board two years later when the Milwaukee Bucks selected him with the 43rd pick of the 2000 NBA draft. No. 43s usually end up in Turkey, Russia or selling cell phones at outlet mall kiosks.

But Redd stuck. He signed a multiyear deal in 2002 (and bought his folks a house). Then this past August, after leading the Bucks in scoring (23.0, 11th best in the NBA), Redd signed a maxed-out, six-year, $91-million deal to stay in Milwaukee.

He drives a Bentley or a Range Rover, but keeps a Bible in each. He has six of the Good Books. And ever since he turned pro, Redd has tithed to his church.

But the new contract allowed him to make good on the vow to his faith, to his father and to himself. So a few months before James' 50th birthday, Michael made it official: It was time to bid on a prime piece of church property on the east side of Columbus.

"That was the first thing in my heart," Michael says. "The Lord, he gave me life. What I did was to give it right back to Him. That's the least I could do, is buy a church. The very least I could do."

The Redds won't divulge exact figures, but those familiar with the church purchase say Michael wrote a check in the millions. There were other contributors, but nothing close to all those zeroes and commas given by Michael. 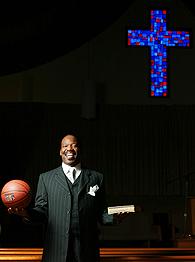 The closing on the church came in late August and was attended by a small congregation: James, Michael and Haji. James was the first to unlock the church doors.

"Probably one of the best moments in our life as a family," says James.

The dedication of the church was about a week later. No more storefront location. No more basement.

"Spectacular, man," says Michael. "The place was packed. My dad was pretty emotional."

We're so happy for him. Thanks to Mr. Perfect Son, the rest of us have to come up with new gift-giving ideas. The battery-operated singing bass is probably out of the question now.

Meanwhile, Redd and the Bucks are off to a nice start, and James' congregation grows a little bit each week. Next August, Michael is getting married, though he hasn't picked a location yet.

All anyone knows for sure is that his fiancé's father is a preacher, too.

Great. I wonder what he'll get.