Let me see if I have my color chart straight:

Mondesire also suggested that McNabb should have given money, which is green, to exiled Eagles wide receiver Terrell Owens, who is black. This is because Eagles owner Jeffrey Lurie, who is white, wouldn't give more money to Owens. Never mind that Owens' contract, which is black and white, didn't require Lurie to do so. 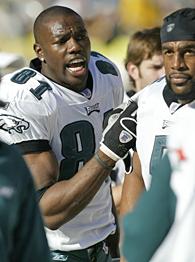 There has been bad blood, which is red, between Owens and McNabb since late last season, when McNabb said the Eagles could win the Super Bowl without the then-injured Owens. Owens apparently wanted McNabb to say the Eagles should stay in Philly, which is grey, and not even bother showing up against the New England Patriots.

The Eagles didn't beat the Patriots with Owens, but that didn't stop T.O. from absolving himself of any responsibility. "I wasn't the guy who got tired in the Super Bowl,'' he said, which is yellow.

Former Eagles player Hugh Douglas, who is black, fought Owens over the remarks. Soon thereafter, Owens apologized to the Eagles and his teammates. It didn't matter; Owens was suspended indefinitely.

Several days later he apologized again, this time mentioning McNabb by name. Owens' agent, Drew Rosenhaus, who is white, also spoke at the second apology event. This is the same event where Rosenhaus turned a shade of red when a reporter asked what service the agent had performed for Owens, other than getting him dismissed from the team.

NFL Players Association President Gene Upshaw, who is black, demanded the Eagles release Owens if they weren't going to reinstate him. The NFLPA filed a grievance, which would be heard by arbitrator Richard Bloch, who is white.

About 10 days later Team Owens presented its case to Bloch. Reporting for ESPN was Sal Paolantonio and Rachel Nichols, who are white.

Several days after the hearings, McNabb announced his season was finished. McNabb aggravated a sports hernia injury while attempting to tackle Cowboys safety Roy Williams, who is black, during the Nov. 14 Philly-Dallas game.

On Nov. 23, Bloch delivered his verdict: the Eagles were within their rights to ice Owens. Bloch's decision caused Upshaw to hold his breath until he turned blue. He vowed to remove Bloch from the list of union-approved arbitrators. Upshaw would prefer arbitrators agree with all union stances.

Meanwhile, Sen. Arlen Specter, who is white, popped off about the possibility of a Senate investigation into possible antitrust violations relative to the Owens/Eagles case. Then Specter backpedaled faster than Brian Dawkins, who is black, settling into Cover Two coverage.

The Eagles are now 5-8 and couldn't qualify for the playoffs even if NFL Commissioner Paul Tagliabue, who is white, tried to add another wild-card team. They are counting the nanoseconds until their irregular season ends Jan. 1.

Of course, it doesn't help that Mondesire continues to look through a prism capable of only producing blacks and whites. His logic -- or absence of it -- is so jaw-droppingly dumb that you wonder what would possess someone in the NAACP to lash out against someone whose map only features the high road.

Mondesire says McNabb is "mediocre at best.'' Someone needs to enroll Mondesire into a remedial course on the NFL. McNabb is a four-time Pro Bowl selection, four-time Eagles team MVP, 2000 NFL MVP runner-up, and quarterback of a team that has made four consecutive NFC championship game appearances, and its first Super Bowl appearance since 1980.

Mondesire suggests that McNabb's supposed unwillingness to run somehow lessens his blackness. In a parallel universe this probably makes sense. But here on Earth, quarterbacks who run for a living usually end up becoming close, personal friends with surgeon of the stars, Dr. James Andrews, who is white. Or they suffer sports hernias, and look as if they're dragging a Volvo behind them.

"He doesn't get it,'' Mondesire said of McNabb.

Actually, it's the other way around.

But that's just the opinion of Gene Wojciechowski, who is white.