PASADENA, Calif. -- This is what I get for chugging the USC Three-Pete Kool-Aid, for predicting the Trojans would lead a Rose Bowl cattle drive to an unprecedented third consecutive national championship -- this time with Texas as the drivees. 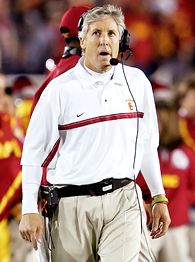 Git along you little Bevos, right?

Problem is, Vince Young and the Longhorns didn't cooperate. And neither did USC, which only has itself -- and the breathtakingly athletic Young -- to blame for failing to give college football immortality a sloppy wet kiss Wednesday evening.

I hate me. I should have remembered what I wrote after the Trojans overcame an Oregon first-half lead back in late September.

If USC wants its historic threepeat, then the Trojans will need an injection of 2004, of humility and of discipline. Otherwise, I'm putting my BCS money on Virginia Tech or Texas as the team most likely to be holding a crystal football after the Jan. 4 Rose Bowl.

And sure enough, Mack Brown and the fellas ended the Trojans' 34-game win streak with a come-from-behind, they-didn't-really-do-that-did-they? upset that had stadium paramedics nervously checking to see whether their cardiac paddles were in working order. After all, how many times do you see USC blow a 12-point lead in the last 4 minutes and 4 seconds?

Texas deserves its championship, Brown deserves his defining moment, and Young deserves to be called the best player on a Rose Bowl field full of future NFL draft picks. But USC will forever drop-kick itself for botching its chance at history.

"Not many teams can ever say they went 34 in a row," said USC senior tight end Dominique Byrd. "We steamrolled teams for two years. I still think this is one of the greatest teams in college football history. But it could have been the team."

It could have been, had the Trojans not given up 18 fourth-quarter points, including two VY touchdown runs that featured more missed tackles than you can shake a Song Girl pompom at.

It could have been, had the Trojans converted a fourth-and-2 at the Texas 45 with only 2:13 remaining on the clock.

It could have been, had the Trojans not used all their timeouts, leaving none available for their final, desperate drive.

It could have been, had Heisman Trophy winner Reggie Bush not suffered a blood-flow problem to his brain during a second-quarter pass play where he attempted to lateral -- repeat, lateral -- as Longhorn defenders were attached to his uni. Hello, fumble.

It could have been, had the Trojans converted a fourth-and-1 at the Texas 17 midway through the first quarter.

It could have been, had the Trojans not belly flopped on three consecutive first-half possessions inside the Texas 26 that resulted in zero points.

"I guess the margin of error with a team like [Texas] is very small," said Byrd.

The Longhorns won fair and square, but the Trojans helped. A lot. And so did a Big Ten officiating crew that apparently received pregame instructions from Sun Belt refs.
And the crack instant-replay crew must have been watching The Cartoon Channel on their monitors when Young's left knee hit the turf moments before he pitched to Selvin Young for a second-quarter touchdown. And yet, no review. Amazing.

USC spent nearly half of its season flirting with the L column. Wednesday night's game marked the fifth time the Trojans trailed at halftime. But somehow they always figured out a way to flick on the afterburner switch and keep the streak intact. This time they flicked  and Texas flicked back.

Bush, in what was likely his final game in a USC uniform, gained 82 yards and scored once. But that fumbled lateral attempt left Pete Carroll almost speechless.

"That's crazy," said Carroll. "That's so far out of line with the way we think and perform, I can't believe it."

On the botched scoring opportunities: "We could have had points in the first half; we screwed up. That's the power of turnovers. That's how it works."

On LenDale White's failed run on the fourth-and-2: "We missed it by how much, a few inches?"

Inches  a foot -- does it really matter?

"We shot ourselves in the foot a couple of times," said White, who also might bolt to the NFL after his 124-yard, three-touchdown performance.

USC shot itself enough times that it barely has any toes left. And that's the shame of it. Nothing against Texas, but I was rooting for The Streak, for the Three-Pete, for an unthinkable run at Oklahoma's 47-game consecutive win record. Instead, I get the VY Highlight Show, which was damn good, but not the same as 35 straight.

Rucker tried to explain the mistakes, the missed tackles, the failed fourth-and-2 play, the lost opportunities. Rather than continue, he simply said, "The rest is history."

No, it almost was.