DETROIT -- I did the math. Seattle Seahawks owner Paul Allen is so rich he could afford to own 27 of the NFL's 32 teams -- estimated price tag: $20.942 billion -- and still have $58 million left in walking-around money. The guy would have to build a new Space Needle just to store all the Lombardi trophies. 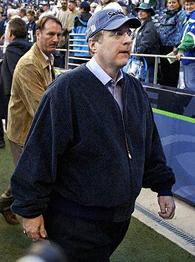 According to Forbes Magazine, Allen is the seventh-wealthiest person on the planet. He is 20 times richer than William Ford Sr., 16 times richer than Oprah, and eight times richer than The Donald. This is what happens when you and your teenage buddy named William Gates III eventually create a company called Microsoft.

Yet half of Seattle can't stand him, his players don't know him and, let's face it, you're not going to see him whooping it up at a Saturday night rager with the Lingerie Bowl models this week. Allen is No. 7 in wallet size, No. 1 in shyness.

Take a look at the file photos of Allen. He's the kid who got towel-snapped to death in 10th-grade P.E. class. And it doesn't help when he goes all Star Trekkie on us, apparently naming his own company, Vulcan, in honor of Spock. Allen even bought a 413-foot yacht equipped with two helicopters and a 60-foot sub, then installed the original captain's chair used by Captain Kirk in the old TV space series.

I've never talked to Allen, although I tried this week. After all, it isn't every day the seventh-richest person in the world has a team in the Super Bowl. But Allen was unavailable. Or working on his Mind Meld technique. Or buying, I don't know ... Belgium. E-mails and calls to his Vulcan liaison requesting an interview went unanswered.

Turns out Mr. Billionaire is the lead guitarist and songwriter of his own band. He reportedly has jammed with U2's Bono. Grown Men does gigs, even has its own CD. You can buy it for $11.99 plus shipping and handling.

"Now you're starting to make me laugh," Morris says.

Be careful. Allen has his sensitive side. Or as Haw says, "Owners are people, too."

Allen isn't a recluse, but he's no Dan Rooney, the everyman who owns the Pittsburgh Steelers. Rooney comes from a shot-and-a-beer town. Allen is from the land of cinnamon dolce lattes. So the convenient thing to do is stick a "Nerd" label on Allen, hand him a cup of joe and tell him to enjoy life on the Starship Enterprise.

But the more you learn about 53-year-old Allen, the more you realize that he has some nuanced coolness to him. That he has tear ducts. That he did a face-to-face with Hodgkin's disease.

Allen was a college dropout. He and Gates co-founded Microsoft in 1975 (I'm typing this on Microsoft Word), and the world changed. Literally. Eight years later, Allen left Microsoft, survived the Hodgkin's and began his solo career. He would create Vulcan Inc., which is a conglomerate of enterprises including real estate, publishing, film, music, investment ventures, philanthropy and high-tech (one of his companies was the creator of what became ESPN.com).

Allen donated $100 million for the Allen Institute for Brain Science. He bought and refurbished Seattle's historic Cinerama Theatre. "And he saved football in Seattle, No. 1," Tobeck says.

This is true. The Seahawks were headed to Los Angeles before Allen purchased the team in 1997. Now they have one of the sweetest stadiums in the NFL and a franchise that isn't going anywhere except up.

Of course, if you have $21 billion of net worth, you should do some good, and Allen does. He is a patron of the arts, and his Experience Music Project museum in Seattle is drop-dead cool.

Yet the citizens of Seattle can't seem to give him a bear hug. Thanks to the Seahawks' success, he's popular, but he's not necessarily beloved. Even when he offered to donate millions to help create a public waterfront park, there were suspicions -- some legitimate -- that the project was profit-motivated.

Allen is private, but then he records a song called "Time Bomb." Kurt Cobain, he isn't, but there's no way you can tell me his lyrics don't reveal something:

I was born without much charm
Set off every false alarm
Combed my slick hair back
No one would cut me a bit of slack
Everything I do may seem wrong
But my heart, my heart beats strong

"I have the CD," says Seahawks coach Mike Holmgren, a former lead singer in a garage band. "This might be the hardest question I answer all day. You know what? They're good. They are really good."

Allen cried in the Seahawks' locker room after his team won the NFC championship. You don't do that if you're the Evil Empire, do you? And anybody who raves about Jimi Hendrix is OK with me.

Morris has shaken Allen's hand after a game, but that's about it for owner-player quality time. Now the tailback is thinking about making a Grown Men CD purchase.

Sure, suck up to the boss. And maybe learn something about him, too.