DETROIT -- Nothing against NFL commissioner Paul Tagliabue's State of the Union address, which was slightly less boring than a lecture on Tupperware, but the best moments of this mind-numbing week took place afterward, at a small table where a 72-year-old former quarterback had a half dozen of us reaching for Kleenex boxes.

I'm not sure why I decided to listen to Bart Starr after Tags' ominous Friday Q&A with reporters (gee, what a surprise: collective bargaining negotiations between the owners and players union aren't going well). Maybe it's because the security guard with the armoire-sized chest escorted Peyton Manning out of the ballroom before I could ask the NFL Man of the Year a question. Maybe it's because I grew up a Packers fan in Milwaukee, own a Green Bay jersey, letter jacket, Christmas ornament and, until recently, Cheesehead (the evil Ball and Chain secretly sold it at a garage sale). Or maybe it was because Starr was the first-ever Super Bowl MVP.

Whatever the reason, I abandoned the chase of Manning, peeled back into the ballroom and found a place at Starr's table. There was plenty of space, especially with 23 other MVPs holding court throughout the room, including John "Sandy, baby, loosen up" Riggins, Pennsylvania gubernatorial candidate Lynn Swann, Joe Namath, Marcus Allen, Larry Csonka, Doug Williams, Ray Lewis, Emmitt Smith, Franco Harris and Roger Staubach. 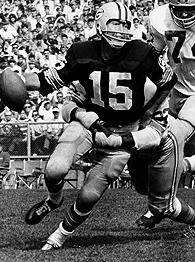 Starr was a 17th-round selection in the 1956 draft. Seventeenth-rounders usually had an NFL shelf life of nanoseconds. They didn't do what Starr did, which was defy all logic by playing 16 seasons, winning three championship rings and becoming a Hall of Famer.

The two-word reason, he said, is simple. You can find it on the 7-pound, 21-inch sterling silver Super Bowl trophy named for the man whom Starr still reveres.

Lombardi would become the Packers' coach in 1959. One Green Bay search committee member was so underwhelmed by the initial recommendation, that he asked, "Who the hell is Vince Lombardi?"

By the end of 1961, Lombardi would win the first of five NFL championships. By the end of the 1967 season he would have the one and only NFL threepeat. By early September 1970, he would be dead of cancer.

Starr played for Lombardi, was defined by Lombardi. Out of respect for Lombardi, he wears his three-diamond championship ring from Super Bowl II -- not because he likes it better than the others, but because the old man said that's the one he would have worn. He would have worn that one, Lombardi told Starr and the Packers, because it represented the third of three consecutive title runs.

Even today Starr can recall word for word what Lombardi told the Packers in their first team meeting in 1959. Began Lombardi that day: "Gentlemen, we're going to relentlessly chase perfection."

Perfection, Lombardi explained, was not attainable. But in the process of chasing perfection, "we will catch excellence."

Shortly after Lombardi's speech, Starr called his wife Cherry and told her the Packers, only months removed from a 1-10 season, were going to win lots of games.

"It was that obvious," says Starr. "That's what we were lacking when he came there: leadership."

Starr is the starting dot from mom-and-pop Super Bowl I to the bloated, corporate spectacle that is Super Bowl XL. He is the eloquent reminder of those early days, which, in many ways, are much more interesting than such silliness as Joey Porter vs. Jerramy Stevens.

The Packers beat the AFL's Kansas City Chiefs 35-10 in Super Bowl I. Max McGee, who had caught only four passes all season, replaced an injured Boyd Dowler and finished with seven receptions for 138 yards and two touchdowns, including a one-handed, behind-the-back catch. More impressive than that: McGee had played despite nursing a hangover after pulling an all-night curfew breaker at assorted Los Angeles clubs.

So I asked Starr if McGee ever gave him a hard time about the award and the car.

As for the car, Starr never kept it. Instead, he petitioned the state of Wisconsin so he could raffle off the Charger, with the proceeds going to the Rawhide Boys Ranch near New London, Wis.

The following season the Packers advanced to the world championship after beating the Dallas Cowboys in the Ice Bowl. You remember: In the waning seconds of the game, Starr called "35 Wedge," but instead of handing the ball to halfback Chuck Mercein, he kept it himself and squirmed into the end zone behind right guard Jerry Kramer and center Ken Bowman.

Perhaps what you didn't know is what Lombardi said on the sideline when Starr first suggested the keeper.

Starr chuckled all the way back to the huddle. The Packers beat the Cowboys, and then defeated the Oakland Raiders in Super Bowl II. Again Starr was named the game's MVP.

Less than three weeks later, Lombardi announced he would step down as coach and become the team's general manager. In 1969 he became part-owner, executive VP and head coach of the Washington Redskins.

During the offseason Lombardi returned to Green Bay to play golf with some of his old friends. While there, Starr invited him to visit the new house the Packers QB and his wife had recently built.

This is where Starr has difficulty telling the remainder of the story. He says Lombardi complimented Cherry on her decorating skills, and Cherry replied, "We owe this to you."

Starr stares straight ahead for what seems like 30 seconds. And then he continues.

"He actually walked over and hugged Cherry, hugged me," Starr says. "And then he walked out.

"We always wondered at that time if he knew he had cancer."

Thirty-five years after Lombardi's death, Starr still is overwhelmed by memories. He pulls out a handkerchief and dabs at his eyes after describing the visit he and Packers backup quarterback Zeke Bratkowski made in 1970 to see Lombardi in the hospital. It was the last time Starr would see Lombardi alive.

After the photo op, white-gloved security personnel placed the trophy in a lined container and carried it out of the ballroom. I wonder what Starr, who was seated closest to the main stage and the trophy stand during Tagliabue's speech, thinks when he sees that Tiffany creation bearing his old coach's name.

I know this: Starr has no doubt that Lombardi -- and those Lombardi ways -- would work as successfully today as they did in 1967.

"He'd be a huge winner," says Starr. "Because the people you win with respect discipline."

Five minutes later, after signing several autographs on his way out of the ballroom, Starr was gone.