DETROIT -- And now, confessions of a Terrible Towel waver. Presenting 15 reasons why the Pittsburgh Steelers will leave Ford Field with Vince's trophy:

1. FOS (Friends of Seahawks) who have been allowed to watch Seattle practices this week say they've never seen the Seahawks look better. They're confident, calm, meticulously prepared -- so say the FOS.

I don't doubt it. Seahawks coach Mike Holmgren didn't get his Super Bowl XXXI ring in a pawn shop; he earned it.

But this is Seattle's first Super Bowl appearance in the 30-year history of the franchise. Until about three weeks ago, the Seahawks hadn't won a postseason game since a 1984 wild-card victory. So I'm counting on some Seattle vomit moments.

Pittsburgh has reached the AFC Championship three out of the last five seasons, so many of its players are accustomed to the playoff pressure. The Steelers have played nine postseason games (6-3) since 2001, the Seahawks have played four (2-2). 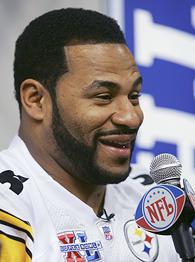 2. Yes, it's true: the most overhyped story of the last two weeks has been -- all together now -- Jerome Bettis coming home to Detroit. To tell you the truth, it feels more like Seattle: cold, wet, and more grey than Paulie Walnuts' side hair.

But Bettis does provide the Steelers with an inspirational centerpiece, which comes in handy during the postseason. And with this being Bettis' final game of his Hall of Fame-caliber career (don't even think of arguing otherwise), you know The Bus is going to pound the Seahawks until they drop.

3. The Vegas wiseguys made sixth-seeded Pittsburgh an opening line 3-point favorite over No. 1-seeded Seattle. They didn't do that because they liked Bill Cowher's mustache better than Holmgren's.

4. Some guys listen to music on their iPods before games. Steelers linebacker Joey Porter listens to opposing players.

I like it that Porter found an imaginary enemy in Seattle's Jerramy Stevens. Porter plays better that way. The Steelers are 1-0 in the postseason when Porter thinks there's a conspiracy against him or his team.

6. Do you know how many opposing running backs rushed for more than 100 yards against the Steelers this season? One: Edgerrin James of the Indianapolis Colts.

James had 124 yards on 29 carries in the Nov. 28 win against the Steelers. He had 56 yards in the AFC Divisional loss.

No way does Seattle's Shaun Alexander break the 100-yard mark against Pittsburgh -- and it doesn't have anything to do with him being "soft." Alexander is as soft as a steel I-beam. And the Seahawks offensive line is arguably the best in the league.

7. My favorite player this week has been Seahawks quarterback Matt Hasselbeck. He's smart, funny, perceptive. He's also a helluva of a ballplayer.

Hasselbeck has done well against defenses that stack the box with everybody but the team trainer. But he hasn't faced defensive savant Dick LeBeau. If LeBeau can overwhelm Peyton Manning, he can overwhelm Hasselbeck.

8. For the first time during Cowher's 14-year tenure, these Steelers actually reflect their coach's personality: intense, tough, intimidated by nothing.

It's this simple: I think the Steelers are tougher than the Seahawks.

9. Troy Polamalu has a better chance of visiting a SuperCuts than he does missing Sunday's game with a "tweaked" ankle. In LeBeau's scheme, I'll take Polamalu at 85 percent healthy over other safeties at 100 percent.

10. Unless Seahawks owner Paul Allen uses some of his $21 billion in net worth to buy their silence, Steelers fans will drown out Seattle's 12th, 13th, or 14th man. Pittsburgh is about 205 miles from Detroit. Seattle is three time zones away. Do the fan math.

11. According to the Detroit News, the guy who plays geeky Napoleon Dynamite (Jon Heder) picks Seattle to win, 42-14.

I'd vote for Pedro before I'd vote for a 28-point Seahawks win. And if I'm Heder, I'd also think long and hard about getting a CAT Scan.

12. Is it just me, or does it seem like everyone has sort of forgotten that Steelers running back Willie Parker rushed for 1,202 yards and four touchdowns during the regular season? Or that he has nine receptions in the postseason for 80 yards and a score?

Every Super Bowl has an X-factor player. Randle El is mine. Plus, he becomes a free agent after the game. Cha-ching.

15. Because my incredible streak of picking the wrong team must one day come to an end (I haven't picked the correct BCS or Final Four winner since 2001). I found a seat on the Steelers bandwagon after the AFC wild-card victory at Cincinnati -- and I'm staying there.