There are some things you know you'll never see. Mike Krzyzewski Night at the Dean Smith Center. Barry Bonds sharing a limo with San Francisco Chronicle writers Mark Fainaru-Wada and Lance Williams. Don Zimmer in a thong. These are givens.

But I have to admit to doing a triple take when I saw page 25E of Monday's edition of USA Today. There in the top right-hand corner was a box listing the odds of each of the 65 teams to win the NCAA Tournament, as determined by noted oddsmaker Danny Sheridan.

Connecticut and Duke: 4-1. Sounds about right.

Texas and Memphis: 8-1. No argument here.

Oral Roberts: 5 sextillion-1. Huh? Are those odds or the title of a Jenna Jameson movie?

Maybe not, but Sheridan still made the 16th-seeded Golden Eagles the longest of March Madness longshots. Not even God -- and he presumably has season tickets to ORU's games -- would take those odds.

"We're not thinking about winning the NCAA Tournament right now," Sutton said. "We're thinking about trying to prepare our team to beat [No. 1-seed] Memphis. We'd have to play a flawless game and Memphis would have to be a little off. You've never seen a 16-seed beat a No. 1 seed. They'd be talking about you for years to come. I told my players that."

Forget about one upset. How about six of them? Do that, and my little $2 bet turns me into the richest person in the universe.

"At least we have an opportunity," Sutton said.

Or as Davidson coach Bob McKillop, whose 15th-seeded Wildcats face Ohio State in the opening round, so eloquently put it: "The odds of winning a tournament while not being in it are infinitesimal."

This is true, except that Sheridan is basically saying that Louisville, which is playing in the NIT, has about the same chance of winning the NCAA Tournament as Davidson. The odds aren't much better for Winthrop.

"We're 5 billion to one?" Winthrop coach Gregg Marshall asked. "You know, coaches and players have to stay away from betting lines. But I'm fascinated they put us on there." 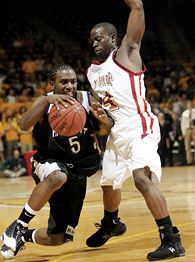 Pause. "What is a sextillion?" he said.

The 15th-seeded Eagles play No. 2-seed Tennessee. Winthrop has already beaten Marquette this season and had its chances to upset Alabama and Memphis. Beat the Vols and Winthrop would actually have it easier in the second round, facing the winner of a 7-10 matchup.

"Our goal is to make it to the second round," Marshall said. "Bottom line, it's like dating: You're not going to land the big one unless you keep asking out the pretty girls."

That's one way of looking at it. Another way is to consider this: If I put $2 down on 16th-seeded Southern to win it all, and the Jaguars pull off a string of upsets that would make Villanova's 1985 title win over Georgetown look like a pick-up game, I'd get $10 trillion. That would cover the United States' $8.3 trillion worth of national debt and leave me with a little walking-around money.

"Maybe you ought to call W," said Belmont coach Rick Byrd, who apparently has the president's number on speed dial.

Byrd, who is good friends with 15-time Grammy Award-winner and Belmont fan Vince Gill, is a realist. "Would anybody really put a significant amount of money on Belmont, Oral Roberts, or any 15- or 16-seed (the Bruins are a No. 15) to go through the tournament at the most ridiculous of odds?" he said. "I doubt there's anybody who can take that bet."

The Bruins play the Bruins of UCLA in the first round. Byrd might be a realist, but he also has a little dreamer in him, too.

The charm of March Madness is that it still has a place for coaches who lead with their hearts, for teams such as Albany, which will make its first-ever NCAA Tournament appearance when it faces, gulp, Connecticut on Friday evening.

"One sextillion to one," Albany coach Will Brown said. "I don't even know what that is. I guess that's going to be our bulletin board material."

If you go by canine nicknames, Albany's Great Danes ought to have the edge over UConn's Huskies. But that's about it for advantages.

It would kill my office pool sheet, but what the heck, here's hoping one of the sextillions pulls off the tournament's greatest upset. Here's hoping Sheridan has to issue an apology.

"UConn's probably the best team in the country," Brown said. "But make no mistake, we're going down there with the intention to win."

Every coach of a double-digit seed says that. But what are the odds of a coach having the stones -- and I love Brown's attitude -- to say his staff is already putting together tape of possible second-round opponent UAB, or Kentucky?

Try septillion to one.