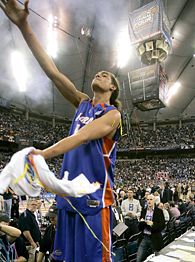 I was wrong. Again.

In a pre-emptive strike against Gator Nation e-mailers (I can already hear them happily typing, "Y-o-u S-u-c-k-!"), I offer congratulations to Florida on its first-ever NCAA championship, a Geno chest bump to colleague and UF advocate Pat Forde, the keenest hoops expert in the land (he was actually calling Florida's inbound plays before it ran them), and an explanation for the Gator-Bait festival Monday evening at the RCA Dome.

It was a rout, a 73-57 How-To-Overwhelm-UCLA operations manual. It wasn't one shining Gator moment, it was a hundred of them.

This puppy was over with 17:39 remaining in the second half. By then, Florida was up 42-25, and UCLA was more cooked than Thanksgiving dinner. The only thing left was for the Florida trainer to dig up a couple pairs of scissors for the postgame net-cutting ceremony.

How did it happen? How does a Florida team that was unranked at season's beginning end up with confetti in its hair: by a confluence of circumstances, of superior strategy, of having better players on a particular night, of one team's will being imposed on the other?

CBS's Billy Packer said it was one of the greatest championship game performances he's seen in 32 Final Fours. He might be right. He also might be wondering why Florida guard Taurean Green called him, "baby," during the postgame interview. But that's for another column, on another night. For now we'll stick to the reasons why UCLA took it in the compression shorts.

20. Bad Karma
UCLA hoops patriarch and living Bruins legend John Wooden had to watch the game from a Los Angeles-area hospital room. He was admitted, at the insistence of his family, to the hospital Sunday and is expected to be released Tuesday or Wednesday.

Bruins coach Ben Howland told his team of Wooden's hospitalization exactly 32 minutes before tip-off. "I got a little emotional," Howland said. "But that didn't affect our performance tonight."

Maybe not, but it wasn't much of a pregame upper.

19. Nerves
With 10:38 left in the first half, Bruins senior center Ryan Hollins re-entered the game and took his position on the court. One problem: He still had his warm-up jersey on.

In a touching gesture by Billy Donovan, the Florida coach made sure Moss, the only senior on the team, was on the floor for the final 25.2 seconds of the game.

17. 21 Assists, 6 Turnovers
That's how many assists and turnovers Florida had Monday night.

Donovan was so thrilled with the numbers, he called them "the difference in the game."

15. Corey Brewer
The 6-foot-8 Florida sophomore guard turned UCLA's Arron Afflalo into a small puddle of tears. Afflalo didn't score his first point (a free throw) until there was 11:28 left in the game. The Bruins were down by 18.

"They played to perfection," Afflalo said of the Gators.

He could have been referring to Brewer, who finished with 11 points, seven rebounds, four assists, three steals and one block. Brewer ended at least two would-be UCLA fast breaks by tipping the ball away from behind.

The guy is a human glove.

14. X and O Talk
Howland said he wanted the Bruins to take away Florida's transition offense. It was a nice thought, but the Gators outscored UCLA on fast break points and points off turnovers, 22-14.

Howland said he wanted the Bruins to double-team Florida's Noah or Al Horford in the post. Oops. Noah had 16 points, Horford 14.

"In retrospect, maybe we should have tried to play them one-on-one in there," Howland said.

Howland said he wanted to attack Florida's press. Didn't happen. Instead, the Bruins committed twice as many turnovers as the Gators. Not all of them were the result of Florida's press, but you get the idea.

13. The First 2:21 of the Second Half
The Bruins trailed by 11 to start the second half -- not exactly what Howland had in mind, but still a manageable figure to overcome.
Instead, Lee Humphrey, the guy I said wouldn't get any easy looks on treys, hit two 3-pointers and turned a semi-close game into a near runaway.

Smart kid, this Humphrey. As Farmar was busy glaring at a ref for not calling a foul on a shot attempt, Humphrey sprinted ahead of him and worked his way open for one of those 3s.

12. More Humphrey
He finished with 15 points -- 12 of those points off 3-pointers. But he also did a solid job on Farmar, the one UCLA player who didn't look like he was overmatched. Farmar scored 18 points, but he needed 21 shots and a pair of free-throw attempts to do it. He also was only 1-for-8 from beyond the arc.

"Humpty Dumpty," said Noah, glancing down at a smiling Humphrey. "You guys look at him as a 3-point shooter. Hey, he was a monster on D tonight.''

11. Green
His scoring numbers were dreadful (two points on 1-for-9 shooting), but Donovan didn't care. Donovan wanted his point guard to make the extra pass, penetrate the lane and keep the turnovers to a minimum.

Cha-ching. Green had eight assists and only one turnover.

10. Lorenzo Mata
How do you say this delicately? Mata, UCLA's sophomore center, uh, struggled Monday night. His non-shining moment included an airballed hook shot from 4 feet. Less than a minute later, he missed another shorty, then got his putback attempt blocked, then picked up his third foul in the same sequence.

He finished 1-for-4 from the field.

9. Florida Dignitaries
UF football coach Urban Meyer canceled Monday's scheduled spring practice so he could attend the championship game. He must have known something.

8. UCLA Cheerleaders and Dance Team
Memo to all of those waving pompoms: Never, ever taunt Noah during inbound plays.

"They were just talking crazy to me, like, 'You're so ugly,' " Noah said. "I mean, it hurts when you have so many beautiful girls out there just telling you how ugly you are and stuff."

Noah blew a kiss to them. Then he blew away the Bruins.

7. Darren Collison
Collison played like a freshman, missing all three of his shot attempts, committing three turnovers and collecting only one assist. He played 21 mostly forgettable minutes.

6. Chippies
UCLA gave up way too many layups and dunks. Of Florida's 26 field goals (and I'm beginning to sound like Digger Phelps with the stat attack), 13 were the result of layups and dunks. This is a big deal because Donovan said afterward he was hoping for three things from the Florida offense: Humphrey getting points in transition, and lots of layups and dunks. He got all three.

5. The Real Cinderella Story
George Mason was a wonderful March Madness story. But remember, the Gators were unranked in both major preseason polls. As recently as March 7, they were ranked No. 16 in the AP poll and No. 14 in the USA Today/ESPN/NABC poll.

4. The Florida Press
So much for my prediction that the Bruins could handle a press. Of course, I wasn't the only one who thought UCLA could take advantage of it (Hello, Ben).

"We got a little sped up by their pressure," Howland said.

No duh. The Bruins committed twice as many turnovers as the Gators. Not all of them were the result of Florida's press, but you get the idea.

3. Scoring Drought
UCLA's Luc Richard Mbah a Moute isn't a scoring machine, but no way did the Bruins figure he'd go without a point until the 10:07 mark in the second half. You can blame that on Reason No.

2. Noah
The free-spirited Noah blocked six shots, breaking the individual championship record by two. He led the Gators with 16 points and nine rebounds, too. I can't even count how many times he freaked out the Bruins by just standing in the lane, waiting for them to try a shot.

Or as Afflalo, who must have been in some sort of mental distress, put it: "He's not a stiff at all."

1. I Picked UCLA
I do hereby promise not to make any more predictions.