NEW YORK -- Emily Burguieres, whose old man is the vice-chairman of the Houston Texans, printed the name on the specially designed 4x5 NFL Draft card and handed it to a league go-fer.

For appearances sake the name was officially registered, confirmed and relayed to commissioner Paul Tagliabue, who emerged from stage right of Radio City Music Hall, stepped behind the imposing cherry wood podium, and announced that the Texans had chosen North Carolina State's Mario Williams as the No. 1 overall pick. 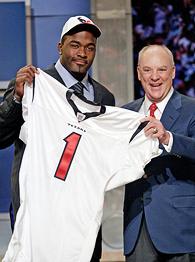 Boos (think Donovan McNabb/circa 1999) rained down from the balcony seating, courtesy of Replica Jersey Nation, as well as the usual collection of J-E-T-S fans, some of whom had actually taken their medication. From East Coast to West Coast, Sun Belt to Rust Belt, the general reaction to Williams's selection was the same:

The Texans did WHAT?

Even now the decision boggles the mind. Houston could have chosen USC tailback Reggie Bush, but instead got sloppy drunk on "measureables" and potential rather than actual production. Hel-lo, did you see how many contrails and broken ankles Bush left behind this season?

It isn't just me, or Mel Kiper Jr., or the We-Find-Evil-In-Every-Living-Thing Jets fans who think so. According to a poll conducted by respected NFL writer Rick Gosselin of the Dallas Morning News, 21 of 26 league general managers rated Bush as the top choice. That's called a landslide.

Even the other Texans rep at the draft day table isn't sure Houston made the smart move.

"I would have taken Bush or I would have tried to trade down and got more players,'' said Jay Mooney, a fourth-grade teacher in Maryland who first met Texans GM Charley Casserly as an intern with the Washington Redskins.

Of course, this might be the Mooney final appearance at the draft day table after the Texans read this. If so -- and that would be greasy on the Texans' part -- he might want to scarf up those NFL-supplied goodies on the table (a jar of team-colored M&Ms, Houston-logo coffee cups, a transistor radio, and an offical draft day clipboard). He can send a few of the goodies to his buddy Casserly, who might be making his final Texans draft appearance too.

There aren't many perks when you go 2-14, but choosing first is one of them. In fact, it's the only one. But the Texans are the Texans because they keep shanking the gimmes. Picking the 2005 Heisman Trophy winner was a gimme, a football tap-in. All they had to do was tell Burguieres to jot down one of the most familiar four letters in the state of Texas: B-U-S-H.

The Texans put a smiley face on the Williams pick. What else could they do? From the moment word leaked late Friday night of the decision, Houston team officials had the spin control on its highest setting: We're switching to a 4-3 defense, so we needed a defensive end ... Williams was co-No. 1 on our board ... Williams could be, said owner Bob McNair Saturday, "another Reggie White."

Yes, he could. Or he could be Vanna White. That's the problem with the draft; you never know for sure.

But Bush was the closest to a sure thing. He was a star from the start of his USC career to the finish. Williams was a star from, oh, half of the 2005 season through the NFL Combine.

No, it isn't. The Texans gagged. They over-analyzed themselves out of the most breathtaking talent anybody has seen in years ... decades? They confused possibilities with probabilities. They will regret this for losses to come.

"I'm not going to take anything personal from the Houston Texans and go out and try to run for 5,000 yards or whatever in a game,'' said Bush, who finds himself in the middle of the rare disaster trifecta: house rental controversy/extortion allegations/Pac-10 investigation. "That's the way it is. That's the nature of the beast and it's part of the game.''

Bush was drafted No. 2 by the New Orleans Saints. If ever a city deserved a break, New Orleans did. It's as if the Texans had the winning Powerball ticket and then decided, what the hell, let's give it to the Saints. They seem like nice people.

Maybe this will all work out. Maybe Williams will become Reggie White Jr. For Mooney and Casserly's sake, let's hope so. But Bush has a chance, a realistic one, to become the standard for future running backs, not the reincarnation of old ones. He won't have to settle for the being the "next'' somebody; that's how singular his talents are.

But he got all of that and more because the Texans selected him No. 1 overall.

The truth is, he didn't deserve that, either.